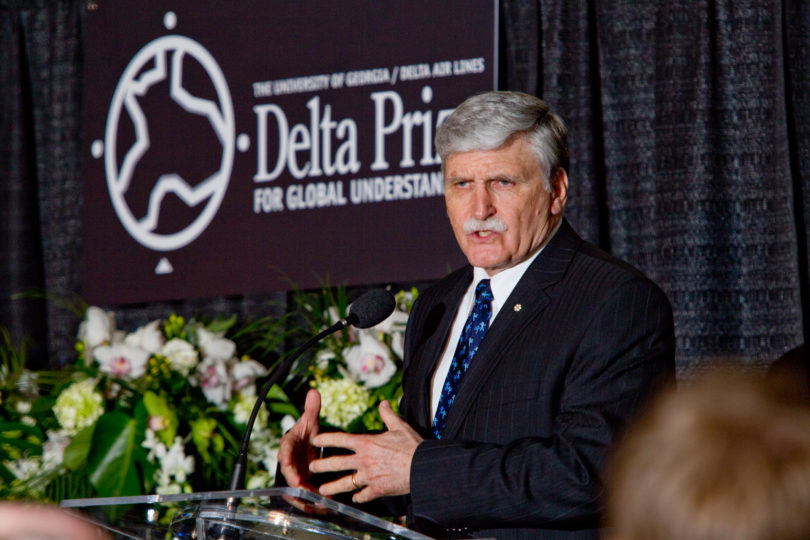 Although he’s seen genocide with his own eyes, Roméo Dallaire, 2012 Delta Prize for Global Understanding honoree, sees hope for the future.

For Dallaire, a Canadian senator and former force commander of the U.N.’s peacekeeping operation in Rwanda, hope stems from college students studying abroad.

“The students will realize that the humanity that is here is not the reality for the whole of humanity, and that there is a responsibility beyond our borders to other human beings,” he said at a March 16 ceremony.

To illustrate his point, Dallaire told a story from his time in Rwanda, when a genocidal civil war was killing 10,000 people a day. On a routine humanitarian mission, Dallaire’s car was stopped by a 7-year-old boy, alone in the middle of the road.

“We went into the huts to see if there was somebody there to take care of this little child, but all we found were bodies that had been left there, killed weeks beforehand. And as we’re looking for somebody, we lost the little boy,” Dallaire said. “So we double back and find him in a hut where there are two adults, male and female, and a couple of children, all half-eaten by dogs and rats. And he’s sitting there as if he’s at home. So I picked him up and I looked at him. His stomach was bloated. He was in rags. He was mangy, dirty, scarred, there were flies all around him. But then I looked into his eyes. And what I saw in the eyes of that 7-year-old boy in the middle of that civil war and genocide was exactly what I saw in the eyes of my 7-year-old son when I left Quebec City for Africa.”

The Delta Prize is sponsored by Delta Air Lines and UGA. Dallaire also is the author of They Fight Like Soldiers; They Die Like Children: The Global Quest to Eradicate the Use of Child Soldiers.