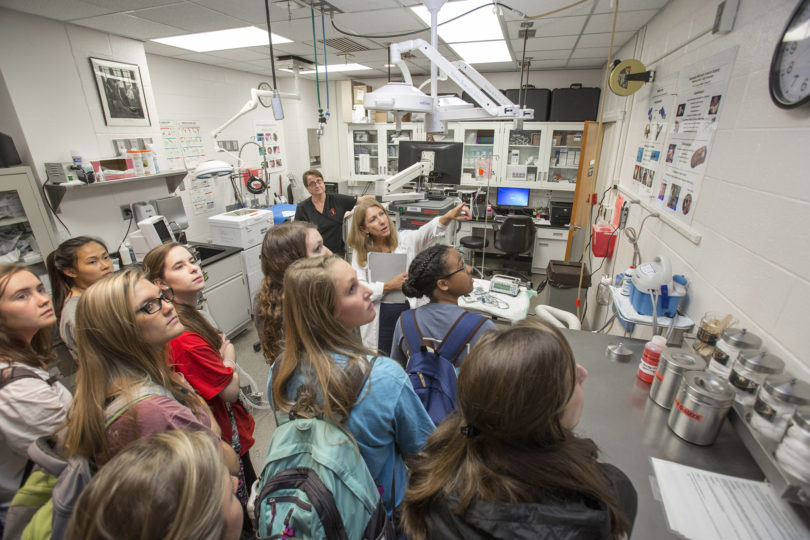 Pet-loving first-year students have always found it difficult to leave home without their beloved cats or dogs.

These students at UGA can find some solace in Cynthia R. Ward’s First-Year Odyssey seminar “Our Pets in Modern Society.”

First-Year Odyssey seminars are designed to introduce students to academic life at UGA, allowing them to engage with faculty and other first-year students in a small class environment.

In this seminar, Ward, a professor of internal medicine at the College of Veterinary Medicine and chief medical officer for small animal medicine, asks students to explore how pets are part of society and what responsibility people have to their pets. But the course also gives students a chance to see and interact with animals.

There were plenty of adoring “oohs” and “ahs” from the class of 15 students as they toured the existing Veterinary Teaching Hospital with Ward and got to see animals of various sizes receiving treatment. The students were especially excited in the large animal wing of the hospital when they found a sick calf taking solace with its mother in a stall.

But the tour wasn’t just about looking at sick animals. Students also were introduced to the wide-ranging specialties in veterinary medicine. Ward said there are nearly as many medical specialties in treating animals as there are in people medicine-including cardiology, anesthesiology, orthopedics and neurology.

While one function of the class is to get students to think deeply about human-animal interaction in society, it’s also an opportunity for students to explore careers that deal with animals.

Elizabeth Davis, a biological science major from Adairsville, grew up on a farm with chickens, goats and horses. She is considering career options with animals beyond being a veterinarian.

As she has found out in the class, there are many options.

“I’ve learned a lot about being a vet and other careers,” she said.

To give students exposure to the animal-related careers, Ward has invited professionals who work with animals, such as a traditional veterinarian, a veterinary technician and an animal shelter specialist, to talk about their careers.

During a visit from an animal trainer, students got to take dogs through an agility course-the kind you can find on cable TV in which canines leap through hoops, run through tunnels and jump over hurdles.

As another opportunity to interact with animals, Ward offers class credit for volunteering at the Athens-Clarke County Animal Control shelter.

That kind of class interaction is one of the highlights of the seminar, as it is for many First-Year Odyssey courses.

“This class is much more hands-on as opposed to other classes where you sit and listen,” said Alyson Wright, a student from Atlanta who still is deciding on a major.

Ward, who is teaching this First-Year Odyssey seminar this fall for the fourth time, also aims to prepare students for the kind of course work they will face throughout college.

Class discussion revolves around some of the more sensitive topics about domesticated animals such as puppy mills and animal testing.

Ward also invited a librarian to class to show students some of the basics of online database academic research.

Most of all, she tries to be an approachable resource for students, many of whom are enrolled in other first-year courses with many more students.

“I look at this not only as an introduction to thinking about animals but also a way to give them a safe haven to talk about issues if they want to and access to a professor if they need one,” Ward said.