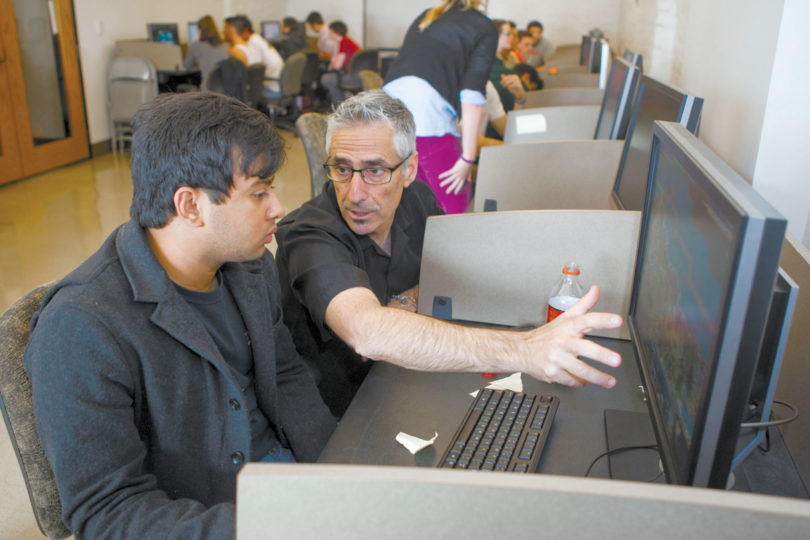 At the bottom floor computer lab of Candler Hall, a couple dozen students huddle in small groups discussing plans that will have global ramifications-sort of.

While some are seeking to create peaceful partnerships with foreign neighbors, a few are hatching plans for world domination.

Deckert’s ambitious plans are for a country that only exists within the context of a video game, and her quest to conquer the globe is part of a classroom exercise.

The course, which was funded through a summer 2012 Innovative Instruction Faculty Grant from the Office of the Vice President for Instruction, largely revolves around using the empire-building video game “Sid Meier’s Civilization” as a class lab to experiment with the concepts of foreign policy.

Berejikian said that in courses in biology and other scientific disciplines teachers can put students in a lab and have them practice methods they might one day utilize in a job in their field.

“In foreign policy, we can’t do that,” he said. “And we probably wouldn’t want them to do that.”

Within the game, players can create and build nations that interact with surrounding neighbors. Students, who were divided into groups to form simulated nations, can choose to trade and make alliances with their neighbors or go to war with them.

As part of the class assignment, the groups drafted foreign policy doctrines that dictate how they interact with other nations. The point of Berejikian’s simulation is for students to uphold their foreign policy goals-and for their countries to survive.

While a student won’t lose points if his or her country loses a computer-simulated war, they will be docked for not following their doctrine.

Berejikian got the idea to use “Civilization” for the class from his then-12-year-old son, Michael, who played the game. The professor was impressed by the game’s nuances in foreign policy.

You might expect a lab revolving around a video game to have students quietly staring at computer screens. Instead, class is buzzing with energy as students representing different fictional nations huddle in corners and hallways trying to negotiate treaties based on what they think their common interests are.

Berejikian is in the mix encouraging the interaction and quizzing them on the foreign policy concepts they are facing.

The treaties to which students agree to are not always kept, but as the game moves forward, aggressive and untrustworthy nations find themselves diplomatically isolated from others.

For Berejikian, the purpose of the game is not to train a class of rogue dictators, but to allow students to learn examples of foreign policy behavior in a way that will be more memorable than just reading case studies.

“In this case, the examples come from their actual simulation play,” he said. “What I get is a lot more engagement. I get a chance to teach during the simulation a lot of the stuff that’s not even on the test, which is really, really cool.”

Berejikian developed a flexible syllabus for the course that teaches to the simulation.

“I have to be able to modulate the readings depending on what’s happening in the class,” he said.

While the game is intended to be creative and fun, it’s followed by a policy analysis paper assignment in which students dissect their country’s strategies and behavior in the game. The grades aren’t based on how well they do in the game, but in how they analyze it afterward.

“The game provides an emotional stimulus for them,” Berejikian said. “Students stay focused on foreign policy concepts because they are actually implementing the class material and so they remember the material much better.”