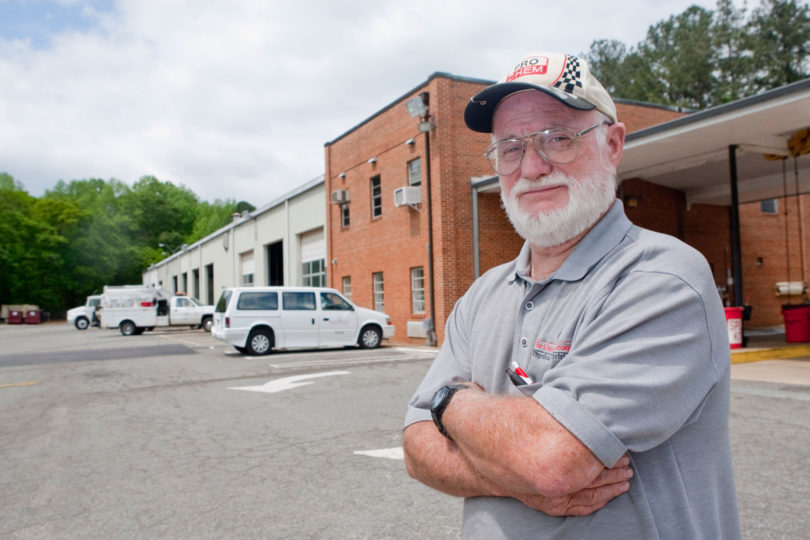 Joe Seay has worked at UGA for 48 years. "I've always believed you should treat people how you want to be treated

It’s hard to find someone who knows the University of Georgia the way Joseph Seay does.

The 67-year-old started at UGA when he was almost 18, working with the Physical Plant’s grounds and heavy equipment departments. Twenty years later, he transferred to vehicle transportation and maintenance and has been there ever since.
Listening to him is like hearing a living history of the university. He remembers the days when the university’s bus fleet consisted of two former Army vehicles and talks about how students used to sneak into Sanford Stadium through a manhole and drove motorcycles across the top of Stegeman Coliseum.

“There have been some drastic changes in this university,” he said. “There’s been a big change in the bus system they’ve got now, and the buildings being thrown up now-Holy Mama! It used to be that you had all the parking spaces you needed. Now they’ve stuck so many buildings in, they’ve had to slap these parking decks up.”

Seay has become a piece of university history in his own right. Every day, people from across campus stop by to chat with “Mr. Joe” as he’s called, or leave a note on the marker board attached to his door.

“That’s what I like about this job, I get to meet nearly all the workers employed at this university because sooner or later, every one of them is going to need to come get gas,” he said. “I like being out here. You’re more in the country and less in the city. And I like my co-workers. I don’t think I could work with a better bunch than I do down here.”

Seay’s official title is garage attendant in the Division of Finance and Administration. For 40 hours a week, he manages the university’s rental car fleet and staffs its pump station.

His goal is to catch any problem with the cars before they’re rented out. Once the fleet is on the road, they represent the university. That means they need to be clean and running well, he said.

Seay has lived in the Madison County area his entire life. Staying close and working for UGA has become a family tradition. Seay’s son, Johnny, is a utility worker in support services; and one of his daughters, Penny Johnson, is a senior accounting technician in the Small Business Development Center.

Despite the nearly half-century he’s been with the university, Seay has no plans to retire. He genuinely enjoys his job and co-workers, and his wife, Peggy, passed away last year.

“God came and got my loved one on Feb. 20, 2010. We were planning on doing some traveling, but He had other plans,” Seay said. “Now I’d rather be out here around my co-workers, picking at and aggravating them, than staying at home and doing hardly nothing.”

When he’s not overseeing the university’s fleet of rental cars, he pulls double duty at Seay’s Automotive Shop, which he runs with his younger brother in Madison County. He also finds time to tend a garden, spend time with his family and go fishing.

“Spending time with my grand babies and great-grandbabies, that’s the No. 1 priority,” he said. “But fishing, well, that’s number two.”