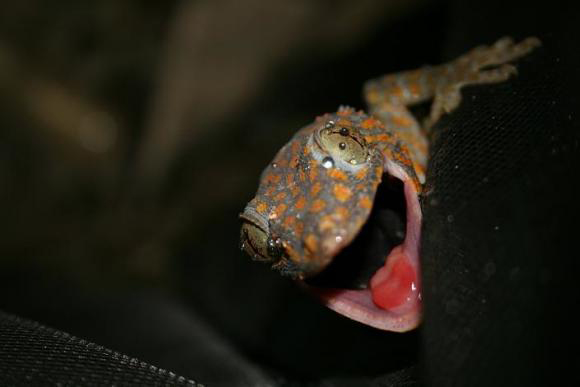 Athens, Ga. – Tokay geckos harbor bacteria that are resistant to a number of antibiotics, making them a health concern for pet owners, according to a study by University of Georgia researchers.

Tokay geckos, a type of gecko known for the “to-kay” sound it makes, are caught in the wild and often imported into the pet trade in the U.S.

Sonia Hernandez, an associate professor of wildlife diseases, imported geckos from Indonesia to study how they respond to antibiotics. She and Christine Casey, a graduate student in the College of Veterinary Medicine, collected fecal samples from the geckos and tested them against common antibiotics. They found that the bacteria from the geckos’ intestines-known as enteric bacteria-were resistant to the antibiotics.

The findings were published in a recent issue of Science of the Total Environment.

“The study shows how importing animals can introduce bacteria into households,” said Hernandez, who is jointly appointed to the Southeastern Cooperative Wildlife Disease Study, based in the college, and the Warnell School of Forestry and Natural Resources. “In general, it’s a good idea to know what bacteria an animal is bringing in. Any new animal, especially one imported from another country, could introduce new bacteria into a pet owner’s household.

“What we did was basic: We cultured feces from the geckos in the lab. We now need to find out why the bacteria of geckos are resistant to antibiotics.”

Of the antibiotics they tested, Hernandez and Casey found that the geckos were resistant to those commonly used in Southeast Asia, like chloramphenicol, aminopenicillins and tetracyclines.

They also found high rates of resistance among commonly used antibiotics in the U.S., like cephalosporins and penicillins.

Casey says that the geckos have health implications when it comes to spreading the bacteria to pet owners. If owners don’t handle the pets correctly, they risk contracting an infection.

“Owners, especially children, should always wash their hands after being in direct or indirect contact with geckos,” Casey said. “If pet owners were to get an infection, then doctors may be unable to treat it with certain antibiotics.”

Another potential problem is if the tokay geckos are set free, Casey said. “Tokay geckos are naturally aggressive and that sometimes leads to their release in the wild by owners who were not aware of their behavior. That ends up being a bigger problem when the geckos can transfer their bacteria to other wildlife.”

Hernandez and Casey recommend that the pet trade do more pathogen screening to prevent antibiotic-resistant bacteria from coming into households.

“We don’t have an explanation for why the geckos were resistant to antibiotics,” Hernandez said. “The next step would be finding how they are acquiring the resistant bacteria and what genes are responsible for the resistance patterns we found.”

Additional study co-authors include Michael J. Yabsley and Susan Sanchez of the University of Georgia and Katherine F. Smith of Brown University.