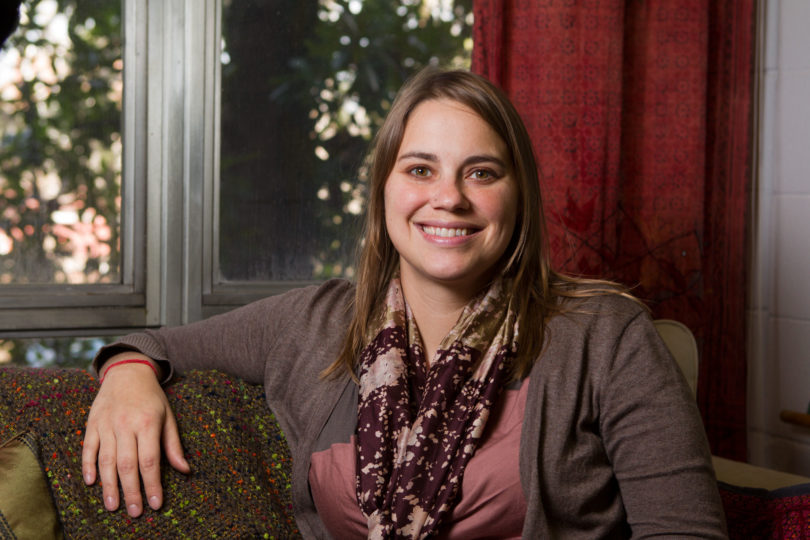 Amy Trauger said that many women choose farming because they want to do something positive for the environment by employing sustainable farming techniques—as her mother did in their years in northern Minnesota.

Amy Trauger’s childhood is a tale of two farms-one in the rocky and rugged soil of northern Minnesota and the other in much more fertile land in the southern part of the state. The contrasts in topography and geography and in how those farms were managed would become, over time, her personal and professional focus and would help lead her to UGA.

Two other facts strongly shaped Trauger: the divorce of her parents when she was 3 and doctors’ discovery when she was 4 that Trauger had juvenile diabetes. Because she would need plenty of healthy, unprocessed food, her mother, raising Trauger and her brother alone near a small town in northern Minnesota, became a farmer while also holding down a full-time job an hour’s drive away.

Trauger, since 2008 an assistant professor of geography in the Franklin College of Arts and Sciences, recalls her early years in northern Minnesota as idyllic. Her mother’s relationship to agriculture changed when she remarried and took Trauger to live on a large commercial farm in the southern part of the state.

“It was very, very different,” said Trauger, a warm, friendly woman who talks with great passion about her research and teaching duties here. “It had chemicals and machines, and everything was for sale-there was no reciprocal economy like what we had known in the northern part of the state. My mom stopped being a farmer. There was no place for it.”

Later, as a college student at the University of Minnesota-Duluth, she decided to dig into the issue of women in farming, and what she found surprised her: By the late ’90s, the number of male farmers in the state was declining while the number of women who farmed had steadily increased. She decided to write her senior capstone research project on women farmers in the state, and used census data, short interviews with women farmers and surveys to learn about their farming experiences.

In her research program at UGA-which is now extending to talking with women in agriculture in India and other places-Trauger draws on a life’s worth of knowledge of women in farming.

“I have lived on farms all my life, and my mother’s changing roles in farm operations throughout her life intrigued me,” said Trauger. “Because of her commitment to our farm in northern Minnesota, I was weaned on goat’s milk, collected eggs from my own chickens and helped put away food for the winter from our garden. As a child, I lived a life that few people ever experience or even know about.”

In her spare time, she loves to cook and garden and ride her horse.

“The way of life I study is becoming ever more rare in our urbanized society,” Trauger writes on her web page, “[because it is a] world where few people realize that food comes from someplace other than the supermarket. In my personal and professional lives, I am committed to helping build sustainable communities where food is fresh, healthy and locally grown and where farmers can live safe, productive and comfortable lives producing this food.”