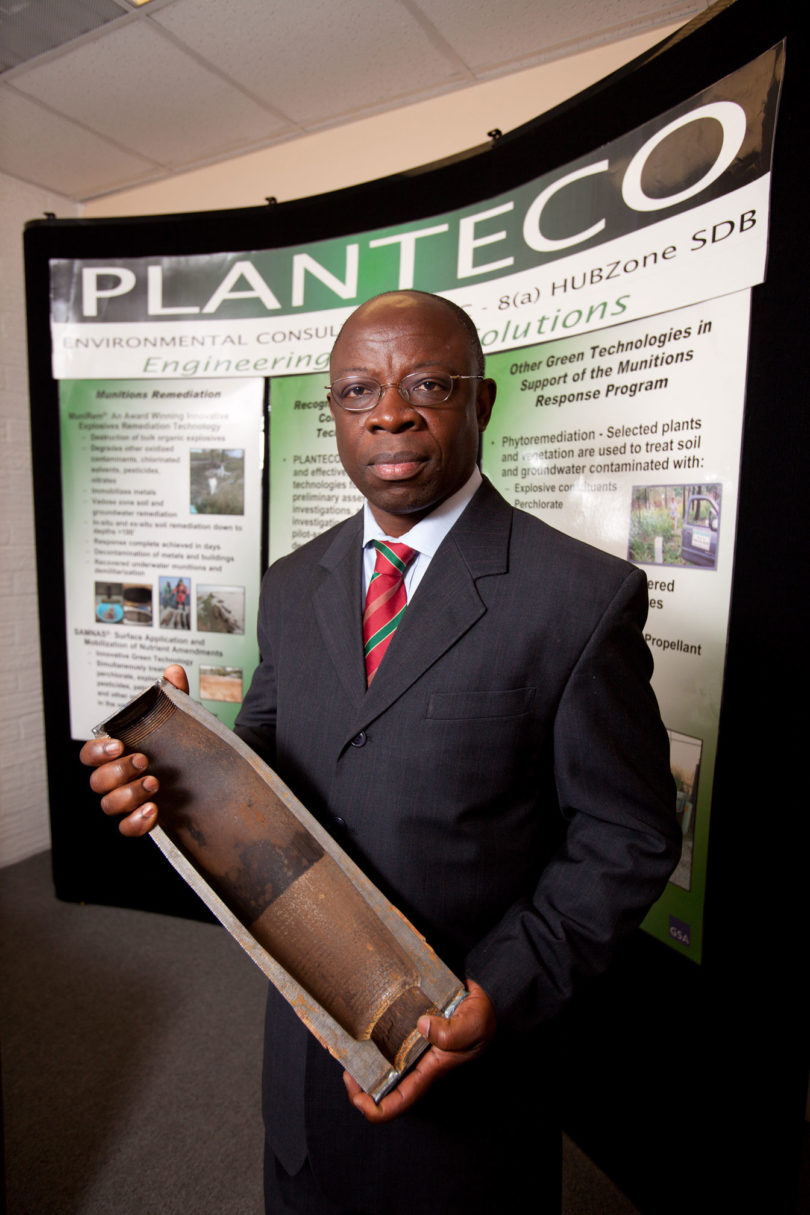 UGA technology that makes land and water safe from explosives contamination is featured in the 2010 “Better World” report recently published by the Association of University Technology Managers.

The report features technology development success stories that describe the transfer of research from discovery to the marketplace, and the technologies’ impact on the health, well-being and overall quality of life of people around the world. The stories are submitted by universities and research organizations worldwide.

The new remediation technology, called MuniRem, was invented by Valentine Nzengung, a professor of geology in the Franklin College of Arts and Sciences and president of Planteco Environmental Consultants LLC, an Athens-based company. The compound is exclusively licensed to Planteco by the University of Georgia Research Foundation Inc.

“The explosive effects of bombs and ammunition are gone quickly,” said Nzengung. “But the substances that made them volatile linger indefinitely.”

MuniRem is an environmentally friendly technology that uses chemical processes to facilitate remediation of the contaminants-including nitrates, ammonia, perchlorates, chemical warfare agents such as mustard gas, and multiple metals, including mercury, chromium, lead and more-left behind from production, firing, training and testing of munitions. The U.S. and many other nations are faced with this same legacy, which threatens human health and the environment.

“MuniRem is a green technology,” said Nzengung. “It transforms explosives’ contaminants into soil nutrients in hours.”

When broadcast, tilled in and activated with water, MuniRem degrades nitrates and converts heavy metals into nontoxic metal-sulfides, reducing soil contamination by more than 98 percent within 24 hours.

In contrast, traditional decontamination methods often involve removal of soil for treatment and/or disposal, may take months or years to complete and are quite expensive.

With MuniRem, “Within a few years, treated land that has been planted with grasses and trees is safe for habitation,” Nzengung said.

MuniRem’s effectiveness has been demonstrated by the tests conducted by the Department of Defense at munitions plants, and Planteco expects to soon receive remediation contracts from the DOD and military munitions manufacturers.

“It is certainly an honor for UGA to be recognized for its research contributions through this prestigious publication, as only 30 major technology development success stories around the world were selected in 2010,” said Sohail Malik, director of the UGARFTechnology Commercialization Office. “I would like to take this opportunity to thank our researchers for their relentless efforts in making a difference in our lives.”