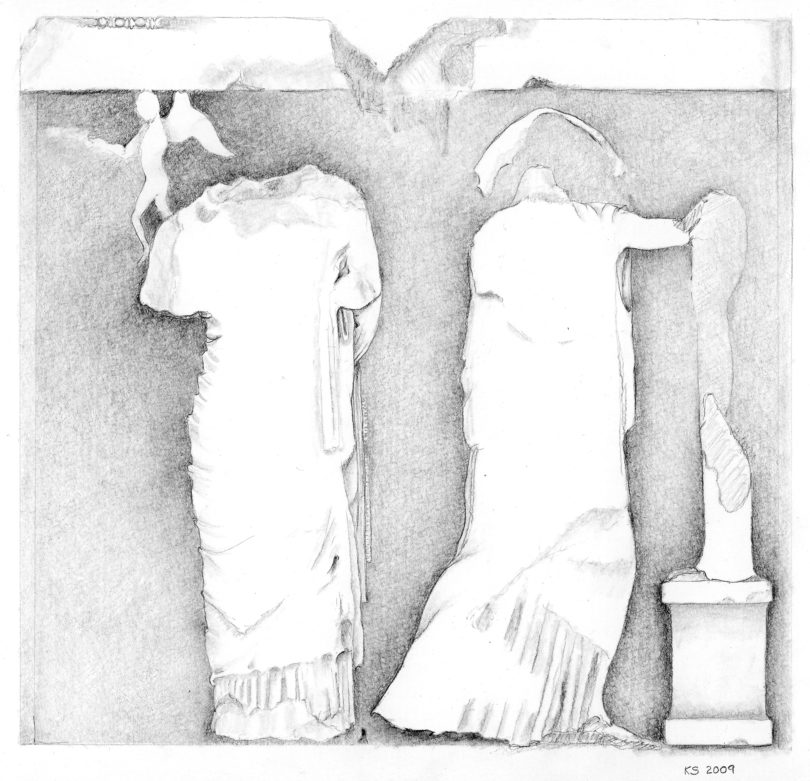 Katherine Schwab's drawing based on North Metope 25 is part of the exhibition on display at the Georgia Museum of Art.

Athens, Ga. – The Georgia Museum of Art at the University of Georgia will host the exhibition “An Archaeologist’s Eye: The Parthenon Drawings of Katherine A. Schwab,” Sept. 13 through Dec. 7. Schwab’s drawings help explain the most badly damaged relief sculptures of the Parthenon.

In 2005, Schwab, who is professor of art history at Fairfield University, began experimenting with graphite and pastel on paper to develop a new method of recording her observations of the monumental sculpted reliefs on the east and north metopes on the Parthenon. A metope (pronounced MEH-ta-pee) is a rectangular panel of the decorative frieze that extends above the columns of Greek temples. The monumental panels (1.5 x 1.2 meters) preserve complex and barely legible damaged surfaces, due to Christians’ deliberate damage of the sculptures of ancient gods and heroes in the sixth century A.D.

“Katherine Schwab’s new drawings of the Parthenon metopes are an epiphany,” said Mark Abbe, guest curator of the exhibition and assistant professor of ancient art at UGA’s Lamar Dodd School of Art. “The product of new close and prolonged scrutiny, they reveal the once fresh and dramatic narrative of the most badly damaged and overlooked sculptures of the Parthenon. These drawings bring us intimately close to the sculptures and allow us to see anew the dramatic narrative immediacy that defined much of the best Greek art of the High Classical period.”

Schwab’s drawings examine what is preserved and what has been lost. They reimagine the Parthenon metopes and the mythological narratives of the battle of Olympian gods, giants and the Trojan War with the sacking of Troy. Schwab’s drawings combine artistic ability and archaeological expertise, and, through the process of drawing, she has made new observations and discoveries.

“Schwab’s drawings reveal for the first time the full complexity and richness of these lost sculptural masterpieces-masterpieces that, in fact, have been hiding in plain sight,” Abbe said.

“I am especially pleased that, working with the Georgia Museum of Art, we have the unique opportunity to present Schwab’s drawings with new photographs of the original sculptures by Socratis Mavrommatis (chief photographer, Acropolis Restoration Service) and a freshly made, full-size monumental plaster cast of one of the best preserved metopes,” he said. “This metope dramatically depicts Helen fleeing to a statue of Athena during the Greek sack of the Trojan citadel and reveals the complex surface of the Parthenon sculptures. The exhibition thus mixes artistic media and invites comparisons among Schwab’s drawings, photographs and three-dimensional sculpted form. All three artistic media have long been fundamental to the appreciation and study of Greek sculpture.”

The exhibition is divided into three sections. The first includes 16 pastel and graphite drawings of the east metopes, which focus on the Olympian gods fighting the Earth-born giants. The second section shows the sacking of Troy, and the third section includes a monumental, full-scale plaster cast of one of the metopes, provided by the Acropolis Restoration Service.

The symposium is free and open to the public and is cosponsored by the Jane and Harry Willson Center for Humanities and Arts, the classics department’s William C. Devaux Fund, the Lamar Dodd School of Art, the Ancient Polychromy Network and anonymous donors.

Unless otherwise noted, all events are free and open to the public.

Museum Information
Partial support for the exhibition and programs at the Georgia Museum of Art is provided by the Georgia Council for the Arts through the appropriations of the Georgia General Assembly. GCA also receives support from its partner agency-the National Endowment for the Arts. Individuals, foundations and corporations provide additional museum support through their gifts to the University of Georgia Foundation. The Georgia Museum of Art is located in the Performing and Visual Arts Complex on the East Campus of the University of Georgia. The address is 90 Carlton St., University of Georgia, Athens, GA 30602-6719. For more information, including hours, see http://www.georgiamuseum.org or call 706-542-4662.