On Feb. 16, the Georgia Museum of Art at the University of Georgia held its annual Black History Month Dinner and Awards Celebration. Artist Freddie Styles and educator Lillian Kincey received awards, and John Morrow Jr., a professor in UGA’s history department, spoke on African-Americans in times of war.

Freddie Styles received the Larry D. and Brenda A. Thompson Award for his efforts as an artist. This award is given annually to honor an African-American artist who has made significant but often lesser-known contributions to the visual arts tradition and has roots in or major connections to Georgia. It is named for the couple who donated 100 works by African-American artists from their collection to the museum and endowed a curatorial position there (held by Shawnya L. Harris) to focus on art by African-American and African artists. Larry Thompson teaches at the University of Georgia School of Law and is a UGA Foundation trustee. Brenda Thompson is the current chair of the museum’s Board of Advisors.

Styles attended Morris Brown College and has been an artist-in-residence at several institutions including Clayton State University, Clark Atlanta University and Spelman College. As a former director of City Gallery East, Styles also worked on various projects that helped promote the arts in Atlanta. His work unites the visual beauty and complexity found in gardens and nature with spiritual concepts and customs. As an active member of the Atlanta arts scene, Styles is a knowledgeable critic and advocate for many regional artists.

“This event feels like one huge embrace of love,” he said while accepting the award and thanking the Thompsons for their friendship and support. “I feel so fortunate that I can take the raw materials of my craft to create something unique. I am so surrounded by the love of people I have met through my work.” 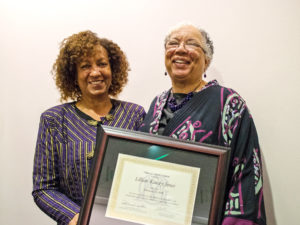 Lillian Kincey received the Lillian C. Lynch Citation. This award goes to an African-American leader who has contributed to cultural education. Lynch, who passed in 2010, was a charter member of the Athens chapter of The Links, Incorporated, a national volunteer service organization for African-American women that focuses on the arts as one of its five key areas of service. Lynch was a devoted and strong advocate for cultural education and the arts in the Athens community.

Kincey is the founder and director of the Young Designers Sewing Program, which teaches fourth- through 12-grade girls the elements of sewing and fashion design. She specifically uses the art of sewing as a way to enhance and reinforce vocabulary development, reading and mathematics in addition to communication skills. Her students gain knowledge of the business and marketing components of the fashion design industry as well as social skills that will translate into futures of entrepreneurship. Kincey is providing a vehicle for underserved girls to gain important skills, support and potential careers for a brighter future.