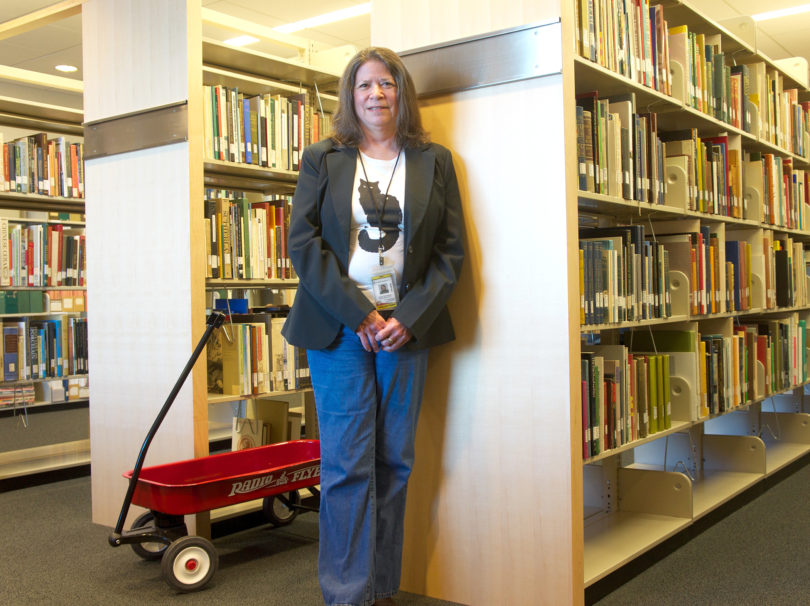 Lucy Rowland moves books from from place to place in a small red wagon. Rowland has spent nearly three years getting the library back in shape to the point where scholars can find what they need.

Athens, Ga. – The Georgia Museum of Art at the University of Georgia will hold an open house to celebrate the reopening of its Louis T. Griffith Library on May 1 from 2 to 4 p.m.

The library, which is on the third floor of the museum, does not lend materials, but its holdings, which include auction catalogs, museum publications and specialty periodicals, are searchable in UGA’s GIL system and visitors may review them in person weekdays from 10 a.m. to 4:45 p.m., after checking in with the receptionist. Photocopies are available for a small fee.

The library is named in honor of the late Louis T. Griffith, a prominent Athenian who was instrumental in the museum’s growth over the years.

The collection has approximately 8,000 volumes and is now moving to a computerized system of cataloging. The library’s holdings include works on American and European art, decorative arts and African-American artists, the latter to fit with Brenda and Larry Thompson’s donation of a large portion of their collection in 2012. The library has some duplicates of the UGA main library’s holdings but is another option for students and faculty in the Lamar Dodd School of Art. It also has resources not available at the main library, such as its artists’ files, which hold information on artists both represented in the museum’s collection and not, as well as research materials on galleries and other museums.

Since the museum’s reopening to the public in 2011, Lucy Rowland, retired from her position as head of collections UGA’s Science Library, where she worked for 35 years, has culled and organized the library’s holdings. Using a small red wagon to move boxes of resource materials, Rowland has spent nearly three years getting the library back in shape to the point where scholars can find what they need.

Prior to Rowland’s service, the museum’s “Library Ladies,” including Jeffie Rowland, Grace Eubank, Claire Swann and the late Kate Howell, helped build and organize the collection. Jane Johnson, former chair of the museum’s board of advisors, helped the library move to a computerized system of cataloging. Beverly Phares, Mara Emma, Eliza Sparacino and students Mary Margaret Cornwell and Carolyn LoPresti have also helped out in the library.