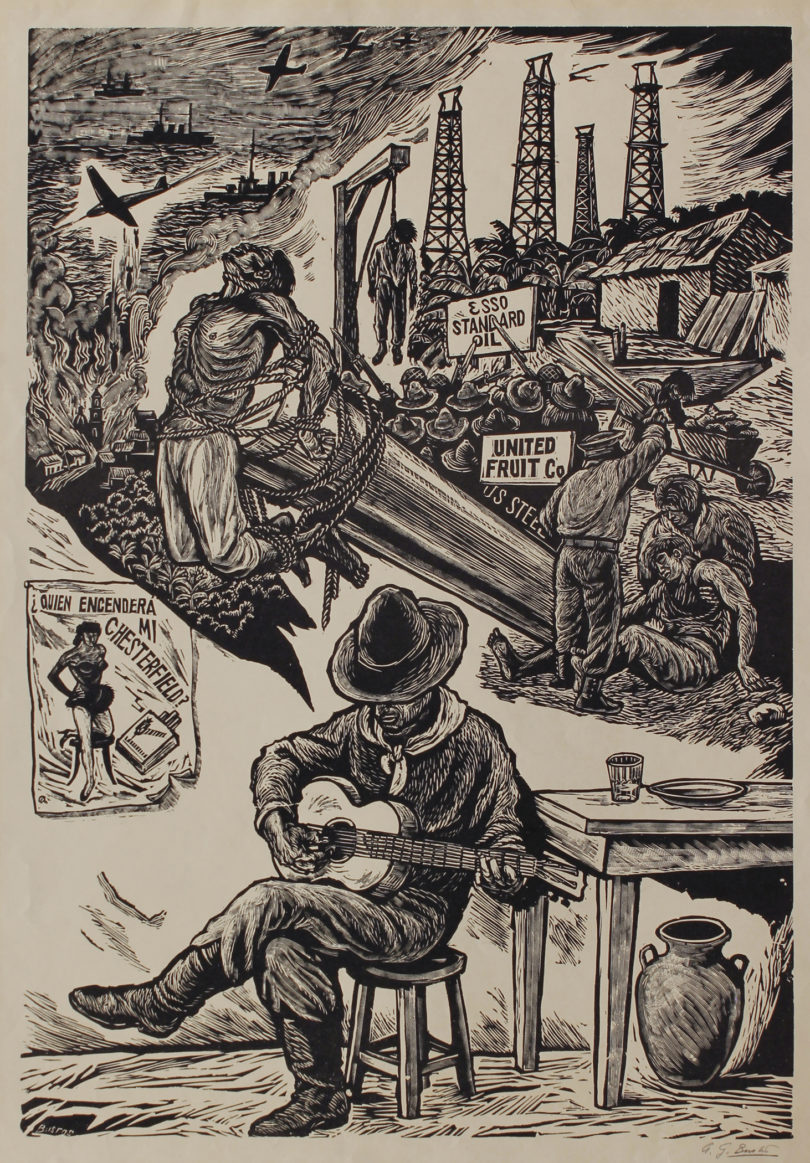 Athens, Ga. – The Georgia Museum of Art at the University of Georgia will present the exhibition “El Taller de Gráfica Popular: Vida y Arte” June 13 to Sept. 13. Consisting of approximately 250 works of Mexican sociopolitical art created by El Taller de Gráfica Popular (the Workshop for Popular Graphics, or TGP for short), the exhibition comes from a single collection but is wide-ranging and thorough in its coverage.

It will take over the entire temporary exhibition wing of the museum’s building and is the most comprehensive in the world on the workshop since the 1950s. The museum will also publish a catalog reproducing every work in the exhibition, plus many supplementary images, the largest and best illustrated such book on the workshop in any language.

Founded in 1937 by Raúl Anguiano, Luis Arenal, Leopoldo Méndez and Pablo O’Higgins, the TGP included many notable 20th-century Mexican printmakers and a few important members from outside the country, including Elizabeth Catlett (an American) and Fanny Rabel (born in Poland). They produced large-scale posters (carteles), fliers (volantes), books, pamphlets, fine art portfolios, calavera newspapers and independent prints, all with the idea that art could serve as a tool, even a weapon. They fought for social change and against fascist aggression at home and abroad by informing and inspiring the Mexican people and like-minded organizations around the globe.

Working collaboratively and employing a process of internal critique, the TGP created works in a variety of forms, from diminutive postcards to enormous banners for lectures and meetings. Members regularly used the workshop facilities to create their own work, which was often sold through the workshop’s storefront. Among their most striking and well-recognized bodies of work were the series of powerful anti-Nazi and anti-fascist posters and the satirical calavera newspapers they produced for the Day of the Dead. Many workshop efforts supported the proletariat, emphasizing workers’ rights and showing the achievements and failures of the Mexican government. As with the art created as part of Franklin Roosevelt’s Works Progress Administration in the U.S., the TGP stood up for workers and farmers, their bold imagery spreading the work even to the illiterate.

“We are tremendously excited to be presenting the definitive exhibition of works from the Taller de Gráfica Popular, which we believe will highlight the workshop’s significance for both scholarly and general audiences,” said Sarah Kate Gillespie, curator of American art at the Georgia Museum of Art. “Demonstrating a sweeping range of techniques and subjects, the exhibition has strong relevance to our collection, which includes many similar works created by Works Progress Administration artists in the United States. Rich in historical, social and artistic content, ‘Vida y Arte’ offers wonderful opportunities for co-programming.”

Founded in 1937, El Taller de Gráfica Popular was perhaps the most prominent, prolific and political workshop in world history, said Michael Ricker, from whose collection the works come. “From the expropriation of foreign oil interests and the support and protection of rural teachers to fervent anti-fascist efforts and the promotion of civil rights, they addressed all the prominent issues of their day,” he said. “For decades, the workshop poured out a relentless stream of posters, fliers, portfolios, prints, hilarious Day of the Dead newspapers, fine books and simple pamphlets. The workshop’s membership included many of Mexico’s finest and best-recognized artists. While virtually all were printmakers, they were also muralists, painters, sculptors and draftsmen. They were not los Tres Grandes (the Big Three [muralists Diego Rivera, David Alfaro Siquieros and José Clemente Orozco]), they were los otros (the others), los trabajadores (the workers), working for what they believed and placing their nation and its people before themselves.”

Associated events during the run of the exhibition include:
• The museum’s quarterly reception, 90 Carlton: Summer, on July 17 ($5, free for members of the Friends of the Georgia Museum of Art).
• A Latin-themed Museum Mix late night art party on Aug. 6.
• A tour led by Gillespie on June 24 at 2 p.m.
• A Family Day on June 20 from 10 a.m. to 1 p.m. (as part of which guests will look at examples of Mexican printmaking in the exhibition then work with Double Dutch Press and students from UGA’s printmaking and book arts department to create a print of their own).
• Art Adventures, a free, interactive program for elementary school-age children held every June and July at the Georgia Museum of Art and targeting day camps, day care centers and community centers. Approximately 400 children take part in Art Adventures each year; for many, this visit is their first to an art museum. The program encourages focused engagement with works of art and a studio art activity that builds on the children’s experiences in the galleries. Call 706-542-0448 or email branew@uga.edu to make a reservation for your group.

Two members of the workshop (Arturo García Bustos and Rina Lazo) and several scholarly authorities will visit for a panel discussion on Aug. 20, which will be at least partly in Spanish with live translation.