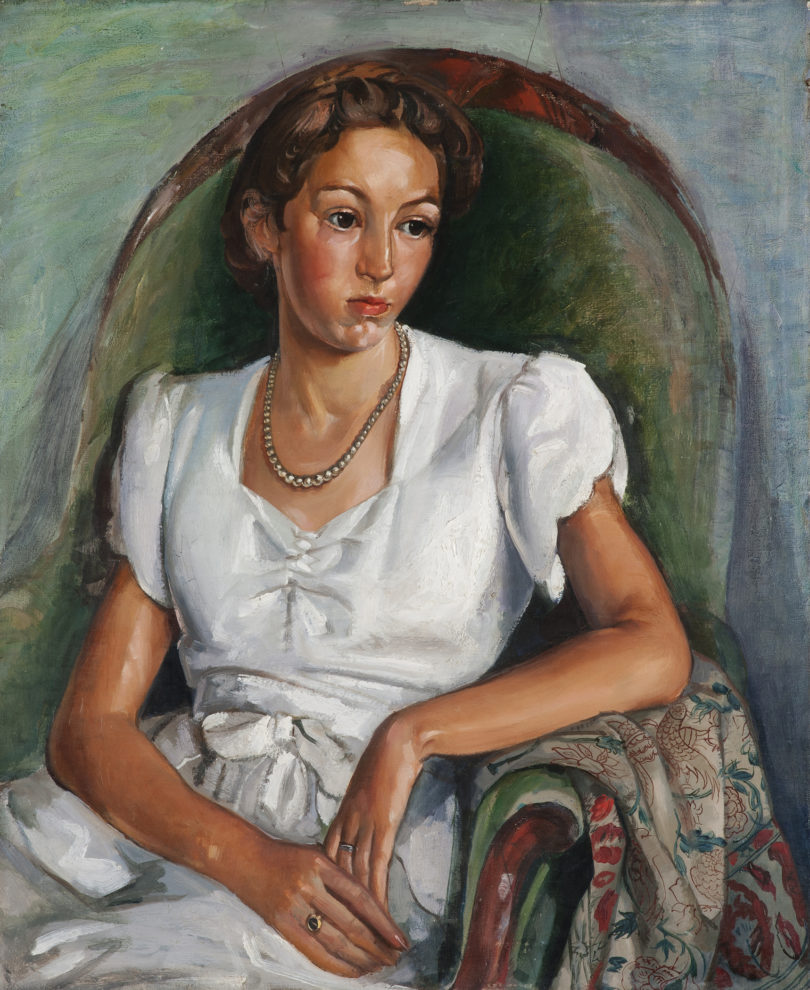 Martha in Her Graduation Dress painted by Pierre Daura will be on display at the Georgia Museum of Art Feb. 21 to April 19.

Athens, Ga. – The Georgia Museum of Art at the University of Georgia will present two exhibitions of the work of Pierre Daura, “Pierre Daura (1896-1976): Picturing Attachments” and “Small Truths: Pierre Daura’s Life and Vision,” both running from Feb. 21 to April 19.

“Picturing Attachments,” organized by Adelheid Gealt, former director of Indiana University Art Museum, focuses on Daura’s portraits of his family throughout his career. Inspired by events such as his marriage to Louise Heron Blair (an American), the birth of their daughter Martha, their life in St. Cirq-Lapopie, his service in the Spanish Civil War, his exile to the U.S. during World War II and Louise’s illness and death, Daura’s images of his family constitute a kind of visual autobiography. Martha in particular was one of his favorite subjects, from the time of her birth, when he sketched her daily, to her graduation from high school and her adulthood.

The exhibition opened at Indiana University Art Museum, and its tour will continue to the Daura Gallery at Lynchburg College (May 26-Aug. 1) and the Joel and Lila Harnett Museum of Art at the University of Richmond Museum (Aug. 19-Oct. 8). Organized by the Indiana University Art Museum in Bloomington, Indiana, the exhibition was made possible through the support of the Daura Foundation and the IU Art Museum’s Arc Fund. Research was supported by the Samuel H. Kress Foundation, the Daura Foundation and IU’s New Frontiers grant program.

The Catalan-American artist attended the Academy of Fine Arts in Barcelona, studying under José Ruiz Blasco (Pablo Picasso’s father). Daura eventually moved to Paris to pursue his art career, where he worked in the studio of Emile Bernard and learned engraving under André Lambert. In 1922 and 1926, he presented at the Salon d’Automne. Later, he co-founded Cercle et Carré, an artists’ group that promoted geometric abstractions in opposition to Surrealism, but despite his experimentation with abstraction he returned to figurative work. In 1945, Daura and his family moved to Lynchburg, Virginia, Louise’s birthplace. There, Daura became chairman of the art department at Lynchburg College and taught studio art at Randolph-Macon Woman’s College.

“Small Truths: Pierre Daura’s Life and Vision,” organized by Lynn Boland, the museum’s Pierre Daura Curator of European Art, draws its works from the Daura Center Collection, a gift from Martha. The exhibition helps round out the picture of Daura’s career, including some of his abstractions.

“This exhibition spans Daura’s entire artistic career, which gives viewers a rare opportunity to examine closely the evolution of the relationship between his family life and his art production,” said Laura Valeri, associate curator of European art at the Georgia Museum of Art and in-house curator of “Picturing Attachments.”

Associated museum events include 90 Carlton: Winter, the museum’s quarterly celebration of its exhibitions ($5, free for members of the Friends of the Georgia Museum of Art), on Feb. 20 at 5:30 p.m.; an Artful Conversation on Feb. 25 at 2 p.m. with curator of education Carissa DiCindio; a tour with Boland on March 4 at 2 p.m.; a Family Day on March 21 from 10 a.m.-noon, where guests can learn about Daura’s work through interactive gallery stations in the exhibitions and create their own Daura-inspired art; and a lecture by Gealt on April 9 at 5:30 p.m. Events are free and open to the public unless otherwise noted.

Museum Information
Partial support for the exhibition and programs at the Georgia Museum of Art is provided by the Georgia Council for the Arts through appropriations of the Georgia General Assembly. The council is a partner agency of the National Endowment for the Arts. Individuals, foundations and corporations provide additional museum support through their gifts to the University of Georgia Foundation. The Georgia Museum of Art is located in the Performing and Visual Arts Complex on UGA’s East Campus. The address is 90 Carlton Street, Athens, GA 30602-1502. For more information, including hours, see georgiamuseum.org or call 706-542-4662.