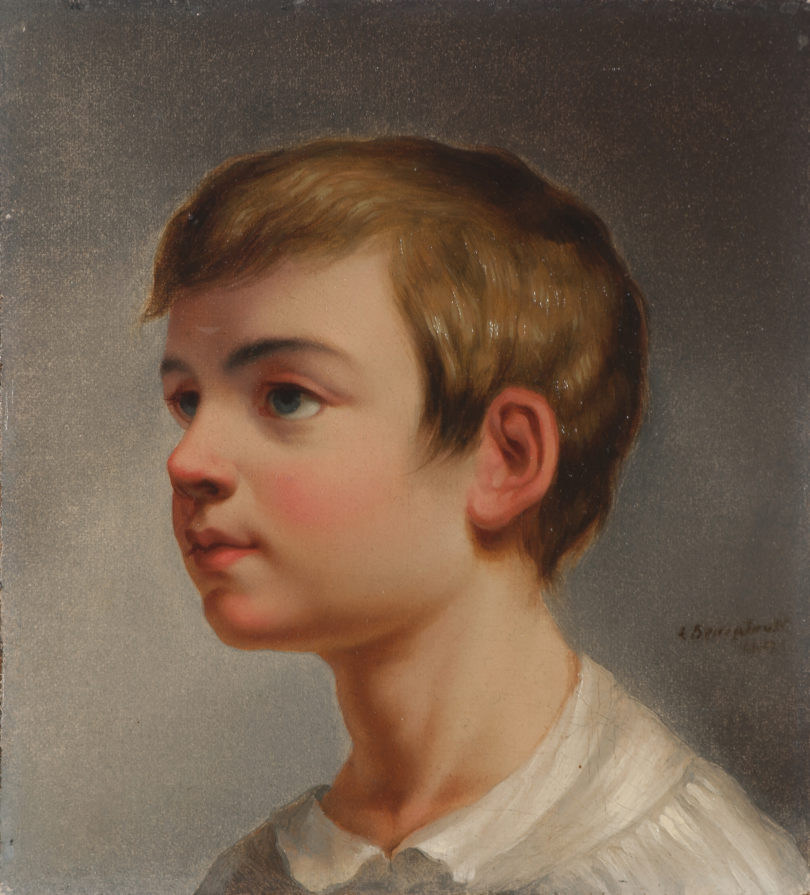 Portrait of a Youth by court painter Aleksei Gavliilovich Venetsianov is part of the exhibition "Gifts and Prayers: The Romanovs and Their Subjects" on display at the Georgia Museum of Art Sept. 3 to Dec. 31.

Athens, GA – This fall, visitors to the Georgia Museum of Art at the University of Georgia will have the chance to see objects of Russian art never before shown in public. Highlighting a private collection on long-term loan to the museum that is a promised gift, the exhibition “Gifts and Prayers: The Romanovs and Their Subjects” will be on display at the museum Sept. 3 to Dec. 31.

The House of Romanov ruled imperial Russia for 300 years, until the Russian Revolution in 1917, which replaced the tsars with a Communist government. The court created elaborate gifts for military leaders, attendants, noble families and others, as part of a system of patronage that helped it maintain its power. Those gifts make up this display, which includes such treasures as the personal cigar box of Alexander II commemorating his coronation (which features individually painted miniatures covering its top), a miniature Fabergé rendition of Peter the Great’s boat, diamond-encrusted brooches worn by ladies of the court, the 1802 Charter of Ennoblement, a luxurious folio volume presented to Lord Durham by Tsar Nicholas I, portraits, statues, photographs of the Romanov family and silver icons.

Among the memorabilia and objects representing military decorations are medals, badges and awards of all the Russian Imperial Orders of Chivalry. Many of these insignia, beautifully rendered in gold, translucent enamel and jewels, were presented by the tsars in recognition of military service. Also showcased are ceremonial swords including a diamond-encrusted sword awarded by Alexander I, armor, helmets topped with double-headed eagles and an intricately designed silver trophy from the Crimean War.

Assembled by a single private collector, the collection has been virtually unknown for decades. Curator Asen Kirin, professor of art history at the Lamar Dodd School of Art, has selected nearly 200 objects to introduce the collection and its presence at the museum, which will promote its study in years to come.

“It is truly remarkable that a collection like this was formed in the United States in the midst of the Cold War and is now made public through the generosity of a private collector,” said Kirin. “This is only the first step in a long-term process of research that will result in the thorough publication of the entire set of 1,226 objects. Even at this initial step we plan to unwrap the many layers of meaning they convey.”

Kirin has already been studying many of the objects. With the help of UGA’s College of Veterinary Medicine, he used an X-ray machine to look more closely at a portrait by Russian court painter Alexey Venetsianov, to help authenticate its signature. The museum will publish a fully illustrated catalog to accompany the exhibition, including Kirin’s discoveries so far.

Related events include a public tour with Kirin on Sept. 7 at 2 p.m.; 90 Carlton: Autumn, the museum’s quarterly reception ($5 or free for members of the Friends of the Georgia Museum of Art) on Sept. 16; a symposium for scholars in the field on Sept. 24 (cost and registration details to be announced), including a keynote speech by Suzanne Massie on Sept. 23 at the Lamar Dodd School of Art that will also serve as the 2016 Shouky Shaheen Distinguished Lecture in the Arts. All events are free and open to the public unless otherwise indicated.

This exhibition is sponsored by the Fraser-Parker Foundation, the W. Newton Morris Charitable Foundation and the Friends of the Georgia Museum of Art.