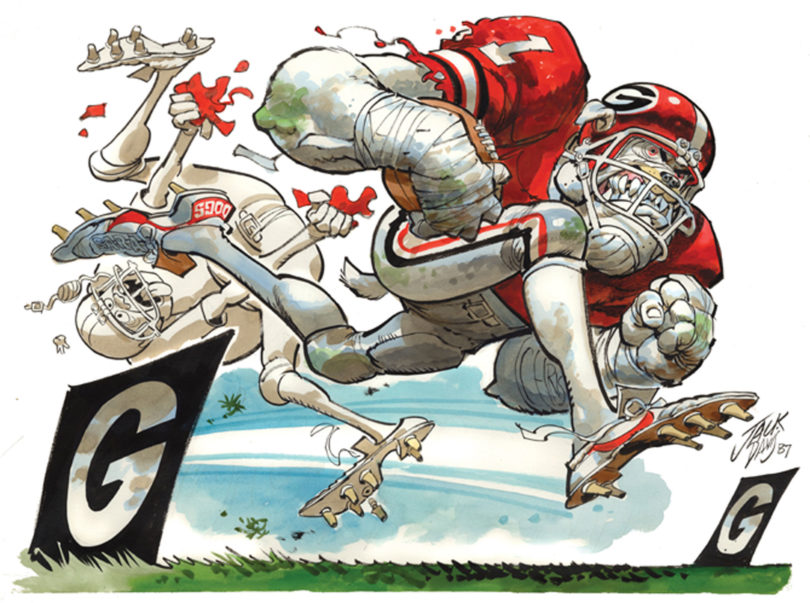 The Georgia Museum of Art at the University of Georgia is sponsoring “Art for Everyone,” an art competition inspired by UGA athletics and the work of illustrator Jack Davis. The contest is being held in conjunction with Davis’ exhibit “Beyond the Bulldog: Jack Davis,” which will be on view at the museum Nov. 3-Jan. 6.

Designs for the contest may feature UGA’s mascot Hairy Dawg and/or anything related to UGA athletics; however, the name and/or likeness of any current UGA student athlete and/or coach cannot be used. Details on how to submit artwork and entry guidelines are available at www.georgiamuseum.org/artforeveryone.

Entries will be posted as they are submitted, and visitors to the site can share their favorites on Facebook, Twitter and Pinterest. The public can vote on submissions once a day, and the winner’s art will be featured on a souvenir cup sold at Stegeman Coliseum during UGA football games. Davis will select the winner from the top three recipients of contest votes.

“We are pleased to provide a meeting ground between sports and art, two vital components of a healthy culture that are too often set in opposition,” said Hillary Brown, director of communications at the museum, who pointed out that the museum also is open its regular hours on football home game Saturdays. “We firmly believe there is no inconsistency in being a fan of UGA athletics and an art lover.”

Born and raised in Georgia, Davis is perhaps best known for his depictions of Southeastern Conference mascots, which have appeared on UGA merchandise for many years. Davis has had a lengthy career in illustration and cartooning, with an immediately recognizable style and an influence that extends far beyond his home state. Having published his first cartoon at the age of 12, Davis studied with artist Lamar Dodd at UGA’s art school, which he attended on the G.I. Bill. After graduating, he moved to New York, where he attended the Art Students League before working with William Gaines’ EC Comics. He also was one of the founding artists of Mad magazine, supplied covers for Time and TV Guide, and designed album covers and movie posters.

Museum Information
Partial support for the exhibitions and programs at the Georgia Museum of Art is provided by the Georgia Council for the Arts through appropriations of the Georgia General Assembly. The council is a partner agency of the National Endowment for the Arts. Individuals, foundations and corporations provide additional museum support through their gifts to the Arch Foundation and the University of Georgia Foundation. The Georgia Museum of Art is located in the Performing and Visual Arts Complex on the East Campus of the University of Georgia. The address is 90 Carlton Street, Athens, Ga. 30602-6719. For more information, including hours, see www.georgiamuseum.org or call 706/542-GMOA (4662).