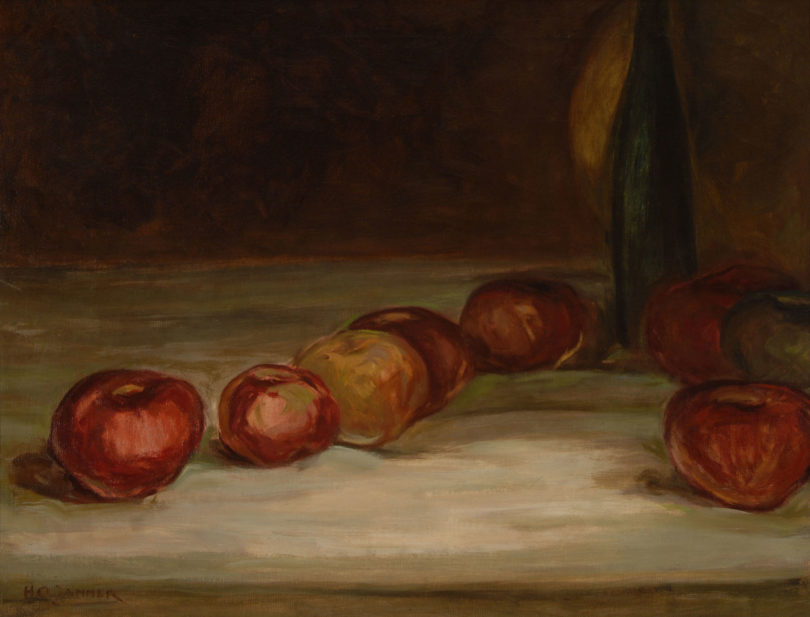 Larry D. and Brenda A. Thompson donated an extensive collection of African American artwork to the Georgia Museum of Art. It includes Henry O. Tanner's "Still Life with Apples

Athens, Ga. – The Georgia Museum of Art at the University of Georgia has a new collection—prominent works by African-American artists—donated by Larry D. and Brenda A. Thompson. The couple will also fund an endowment to support a new curatorial position.

Larry Thompson announced the donation and endowment support at a panel discussion held at the GMOA in conjunction with the exhibition “Tradition Redefined: The Larry and Brenda Thompson Collection of African American Art” as part of UGA’s 50th anniversary celebration of desegregation.

The agreement between the museum, UGA and the Thompsons was recently finalized; and UGA secured an initial donation of paintings, prints and sculpture. The Thompsons’ gift initially includes 37 works, many of which appeared in the exhibition “Tradition Redefined,” which was on display at the museum in early 2011.

The gift enriches an original donation of 100 American paintings by Alfred Heber Holbrook, who founded the Georgia Museum of Art with his gift in 1945.

Larry and Brenda Thompson collect the works of both celebrated artists and artists considered emerging, regional or lesser known. The result is a collection that offers a more in-depth, inclusive understanding of African-American artists and their aesthetic and social concerns. It is the Thompsons’ desire to give more works to the museum in the coming years.

The new curatorial position—the Larry D. and Brenda A. Thompson Curator of the African Diaspora—will be a full-time academic professional who will oversee the museum’s collection of paintings, sculpture, prints, drawings and archives by African and African-American artists.

The curator will also conduct research and develop special exhibitions, lectures and symposia and other educational events for university and general audiences. The position will actively seek acquisitions for the permanent collection and will be available as adjunct faculty at the Lamar Dodd School of Art, working with faculty from other areas—such as the UGA African American Cultural Center—to expand multidisciplinary programming at the university. The curator will work with museum staff to enhance public knowledge of art by African Americans within the contexts of American history, African history and social, practical and creative expression.

“Some traditional art by African Americans relates directly to West African cultures,” said Hillary Brown, GMOA director of communications. “This connection is more pronounced in Georgia and neighboring coastal states than in any other place in North America, and the sensibilities of modern African-American artists are, likewise, tied to and underpinned by cultural patterns that emerged from Africa. Modernism in Western art has an important African ingredient.”

By combining these two disciplines, the Georgia Museum of Art will create a specialized field with innovative teaching and research possibilities and one that will be of special relevance to the university and the state. The combined area also will enhance the current curatorial interests of American art, European art and decorative arts, particularly the decorative arts of Georgia and the South, which are the primary focus of the museum’s Henry D. Green Center for the Study of the Decorative Arts.

Both Larry and Brenda Thompson have significant ties to UGA and the museum. Larry Thompson joined the law school at UGA this fall as the John A. Sibley Professor in Corporate and Business Law. Having served as former deputy attorney general for the U.S. and former senior vice president of government affairs, general counsel and secretary for PepsiCo, he will be teaching in the areas of corporate law and white-collar crime.

Thompson has been a visiting professor and guest speaker at UGA several times since 2001. Previously, he was a partner in the Atlanta office of King & Spalding and served as the U.S. Attorney for the Northern District of Georgia, where he directed the Southern Organized Crime Drug Enforcement Task Force and was a member of the Attorney General’s Economic Crime Council.

Thompson has received a variety of accolades for his work over the years, including the Edmund Jennings Randolph Award for outstanding contributions to the accomplishment of the Department of Justice’s mission and the Federal Bar Association’s Outstanding Litigator Award. He also served as a senior fellow with the Brookings Institution in Washington, D.C., and was recently elected to the Washington Post Company’s Board of Directors.

Brenda Thompson has long been a patron and leader in the arts. She currently serves on the board of trustees for the Barnes Foundation and the board of the Clark Atlanta University Art Galleries. She joined the Georgia Museum of Art’s board of advisors in fall 2011.