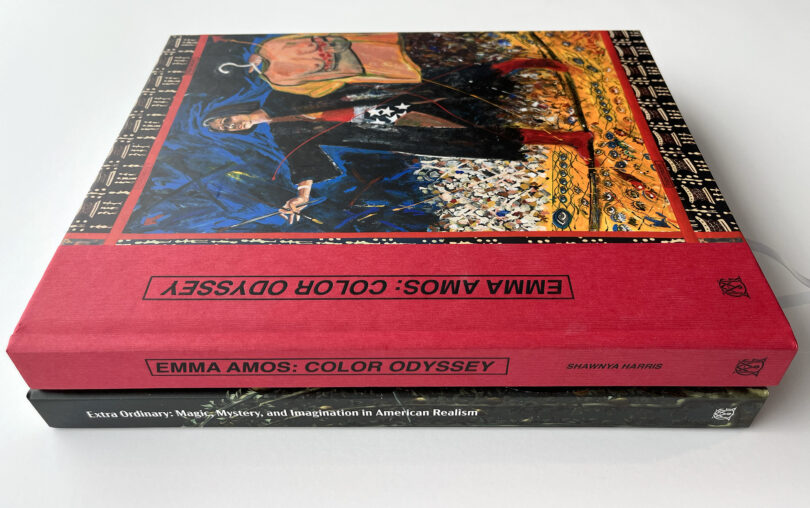 In January, SECAC presented the Georgia Museum of Art at the University of Georgia two Awards for Curatorial Excellence.

The Award for Outstanding Exhibition and Catalogue of Contemporary Materials went to Shawnya Harris, Larry D. and Brenda A. Thompson Curator of African American and African Diasporic Art, for the exhibition “Emma Amos: Color Odyssey.” Outstanding Exhibition and Catalogue of Historical Materials was awarded to Jeffrey Richmond-Moll for “Extra Ordinary: Magic, Mystery and Imagination in American Realism.” Both awards recognize curators who exceed expectations in the design, publication and/or community engagement of an exhibition.

“As recipients of the two awards for outstanding exhibitions from SECAC, our curators, Shawnya Harris and Jeffrey Richmond-Moll, illustrate the high standards our team at the Georgia Museum of Art hold for themselves,” said William Underwood Eiland, the museum’s director. “While the exhibitions drew large, interested and appreciative audiences, the accompanying publications continue to present heretofore unpublished research and, thus, new knowledge to a national audience. SECAC’s recognition of our curators’ excellence both encourages and inspires us to attain higher levels of accomplishment.”

“Emma Amos: Color Odyssey” presented a wide range of the African American artist’s work and traveled to the Munson-Williams-Proctor Arts Institute and the Philadelphia Museum of Art. The exhibition strongly encouraged community engagement, including a Zoom tour for all Clarke County School District fifth graders that included interactive elements and an art-making activity. Other virtual activities included a discussion with Harris and other scholars, the ability to pick up free art kits for Family Day To-Go, the museum’s biennial Emerging Scholars Symposium, Toddler Tuesday and Teen Studio. The exhibition catalogue, published by the museum, included essays by Harris, Kay WalkingStick, Lisa Farrington, Laurel Garber, Phoebe Wolkfskill and LaToya Ruby Frazier, as well as an extensive chronology of Amos’ life and career, followed by a catalogue section that illustrated every work in the exhibition in full color.

“Extra Ordinary: Magic, Mystery, and Imagination in American Realism” included 65 paintings and works on paper that highlighted a wider constellation of artists than the idea of “magic realism” has often encompassed. Both the exhibition and its catalogue, also published by the museum, included women, artists of color and artists from regions outside New York. All of them turned to the mysterious, supernatural and hyperreal to examine key social issues of the day. These artists embraced magic or fantasy not as a means to escape everyday reality but as a way to engage more directly with it. Exhibition programming included Zoom events like a lecture by Philip Eliasoph, who also contributed to the catalogue; a panel discussion featuring faculty from UGA and Clark Atlanta University led by Richmond-Moll; two Artful Conversation programs led by education staff; a lecture by Angela Miller; and family programming including for home-schoolers, toddlers, teenagers and more.

SECAC (formerly the Southeastern College Art Conference) is a nonprofit organization that promotes the study and practice of the visual arts in higher education on a national basis. SECAC facilitates cooperation and fosters on-going dialog about pertinent creative, scholarly and educational issues among teachers and administrators in universities, colleges, community colleges, professional art schools and museums; and among independent artists and scholars. Membership includes individuals and institutions from the original group of southeastern states that founded the conference: Alabama, Arkansas, Florida, Georgia, Kentucky, Louisiana, Mississippi, North Carolina, South Carolina, Tennessee, Virginia and West Virginia. Over the decades, however, SECAC has grown to include individual and institutional members from across the United States, becoming the second largest national organization of its kind. SECAC is an affiliated organization of the national College Art Association and participates in its annual conferences.