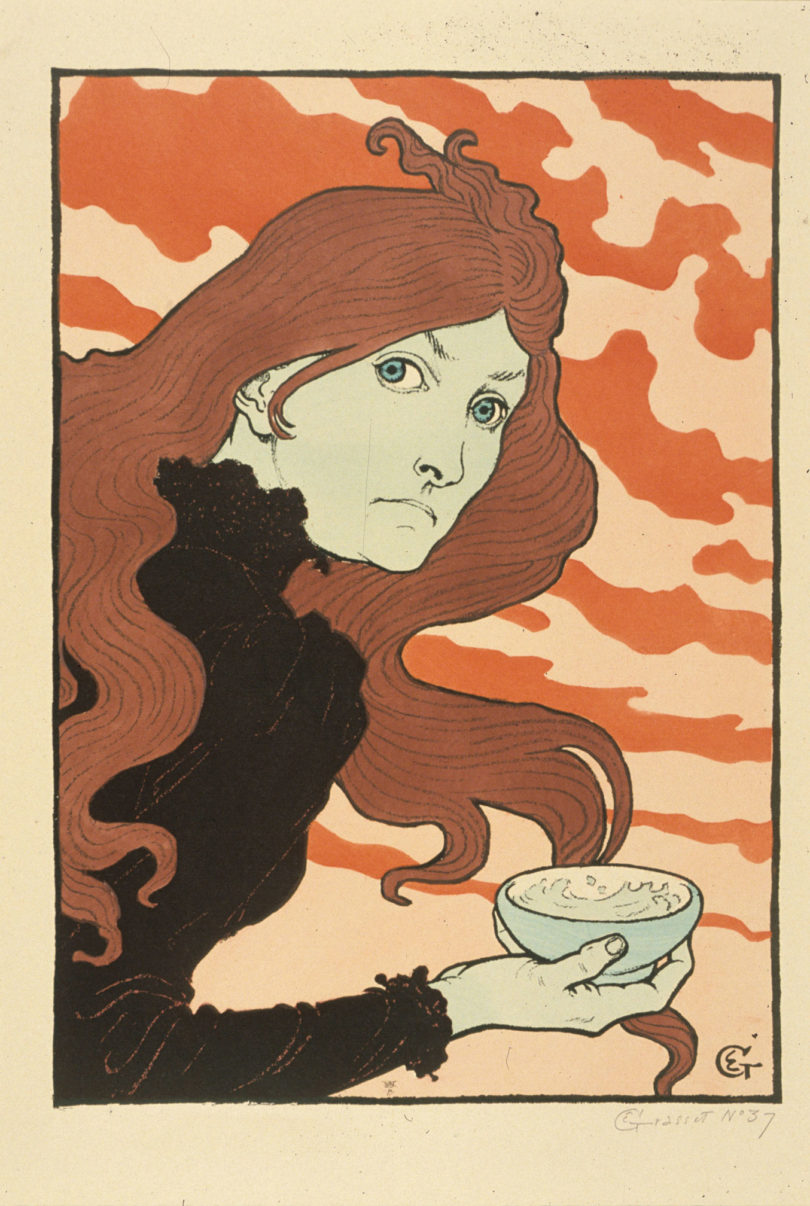 Vitrioleuse (Vitriol-thrower) by Eugène Samuel Grasset will be on display at the Georgia Museum of Art during the l'Estampe originale exhibition.

Athens, Ga. – The Georgia Museum of Art will present “Originality by Subscription: l’Estampe originale,” an exhibition of works on paper from the museum’s permanent collection, from Nov. 19 to Dec. 31 in the Lamar Dodd Gallery. The exhibition is only on view for a short time due to the need to preserve the vibrant colors of the prints.

The works were originally printed in l’Estampe originale, a quarterly started in March 1893 in France. The publication was offered by subscription to a limited audience. Each contributor was carefully selected, and each work was made exclusively for the publication.

Originality by Subscription will focus on the circumstances that combined to make l’Estampe originale such a success. The print portfolio was, in a sense, the culmination of a century-long revival that brought printmaking to the forefront of artistic practice in France.

In addition, art at the end of the 19th century saw a new value placed on originality. Artists promoted themselves as creators of visions that had never existed and as arbiters of something original.

The exhibition will also explore the revolutionary use of color in the portfolio’s prints. Printing in multiple colors had existed for quite some time; however in the 1890s, artists began using color in an explosion of creative experimentation. By 1893, when l’Estampe originale began publication, color printing-particularly in the medium of lithography-was readily available and charged with aesthetic possibilities.

“L’Estampe originale is upheld as a time capsule of this extraordinarily creative moment in the Parisian art world. The portfolio gives us a prime glimpse of what artists were reacting to and where modern art would go in the 20th century,” said Phaedra Siebert, independent scholar and guest curator of the exhibition.

Originality by Subscription will include many of the original color prints in the portfolios. It will also look at prints in more traditional media that contextualize and explain the color innovations fostered by the publication.

“Complete sets of l’Estampe originale are exceedingly rare, a fact that has made creating this focused exhibition quite a privilege,” Siebert said. “In addition, the wonderful condition of some of l’Estampe originale’s most iconic images has made it all the more pleasurable to work with the Georgia Museum of Art’s collection.”

The exhibition will include more than 40 works by such masters as Henri de Toulouse-Lautrec, Odilon Redon, James McNeill Whistler, Camille Pissarro and Paul Gauguin.