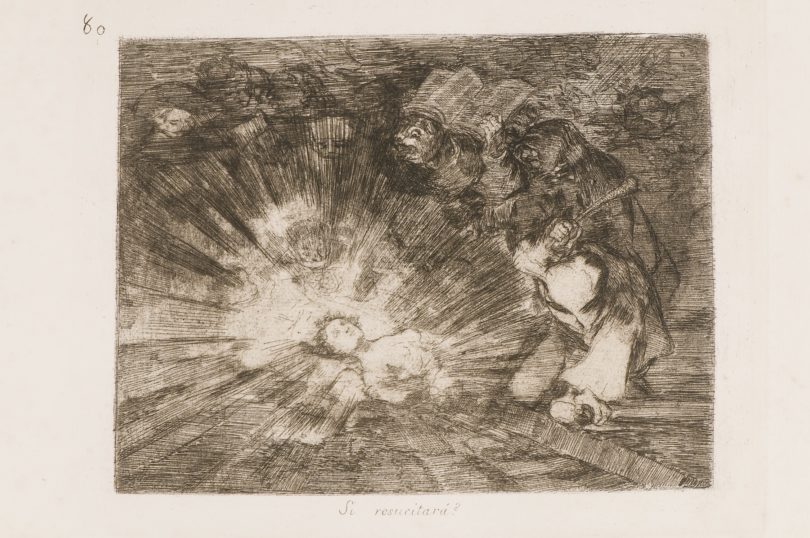 Athens, Ga. – The Georgia Museum of Art at the University of Georgia will exhibit Francisco de Goya’s (1746-1828) “Disasters of War” Aug. 18-Oct. 28. This exhibition will feature all 80 prints that make up the famous series depicting the lengthy Peninsular War (1808-1814) between Spanish forces and the invading army of Napoleon Bonaparte.

Organized by Lynn Boland, Pierre Daura Curator of European Art at GMOA, with assistance from Angela Woodlee, a graduate student in art history at UGA’s Lamar Dodd School of Art, the print series is one of the earliest attempts by an artist to record history as it was unfolding. Based on Goya’s experience of the conflict, each image is a powerful eyewitness account of the death and destruction war generates.

Born in Fuendetodos, Spain, Goya often is regarded as the most important Spanish artist of the late 18th and early 19th centuries. His introduction to the royal workshops and his later promotion to court painter lasted four ruling monarchies and the remainder of his life. Goya’s relationship with the Spanish crown and its many successions greatly influenced the subject matter of his works.

Goya reached his peak of popularity during the enlightened monarchy of Charles IV, which ended when Napoleon’s armies invaded Spain in 1808. During the incursion, the artist witnessed mass executions of Spanish citizens who opposed Napoleon’s invasion and the installation of Bonaparte’s brother, Joseph, on the Spanish throne. From 1810-1820, Goya focused on the devastation and travesties of war during Spain’s struggle for independence from France in perhaps his greatest achievement as a printmaker, the “Disasters of War” series.

“Goya’s series is a telling indictment of war and its atrocities, which rings as true today as it did when he created the images 200 years ago,” said Boland.

Viewed collectively, the series generates a narrative arc that is generally understood as three thematic groupings, following three historical phases. The first 47 images in the series reflect the horrors of the war and its effects on individuals who witnessed and experienced the atrocities leading to French occupation. The next 16 images address the famine that ravaged Madrid from August 1811-August 1812. The final grouping is more allegorical than documentary and primarily serves as a commentary on Ferdinand VII, who ascended the Spanish throne after the Bourbon monarchy was restored with Napoleon’s fall in 1814. As the new king, he revoked the Constitution, reinstated the Inquisition and declared himself absolute monarch.

In addition to questioning the futility of battle, the print series also critiques the tyranny of monarchy, be it French, Spanish or clerical. Because of political complications, Goya did not print these etchings during his lifetime. The first set of prints was not published until 1863, when it was finally considered politically safe to distribute works of art criticizing the French and the Bourbon Restoration.

“Goya’s general sentiments are immediately clear in the prints, but some of the nuances of his critiques require explanations for contemporary viewers,” said Boland.

Mr. and Mrs. James B. Anderson gave the entire set of 80 prints, a 1906 edition, to the museum in 1985. The W. Newton Morris Charitable Foundation and the Friends of the Georgia Museum of Art are sponsoring this exhibition.

Alisa Luxenberg, professor of art history in the Lamar Dodd School of Art, will give a gallery talk on the exhibition Aug. 30 at 5:30 p.m.