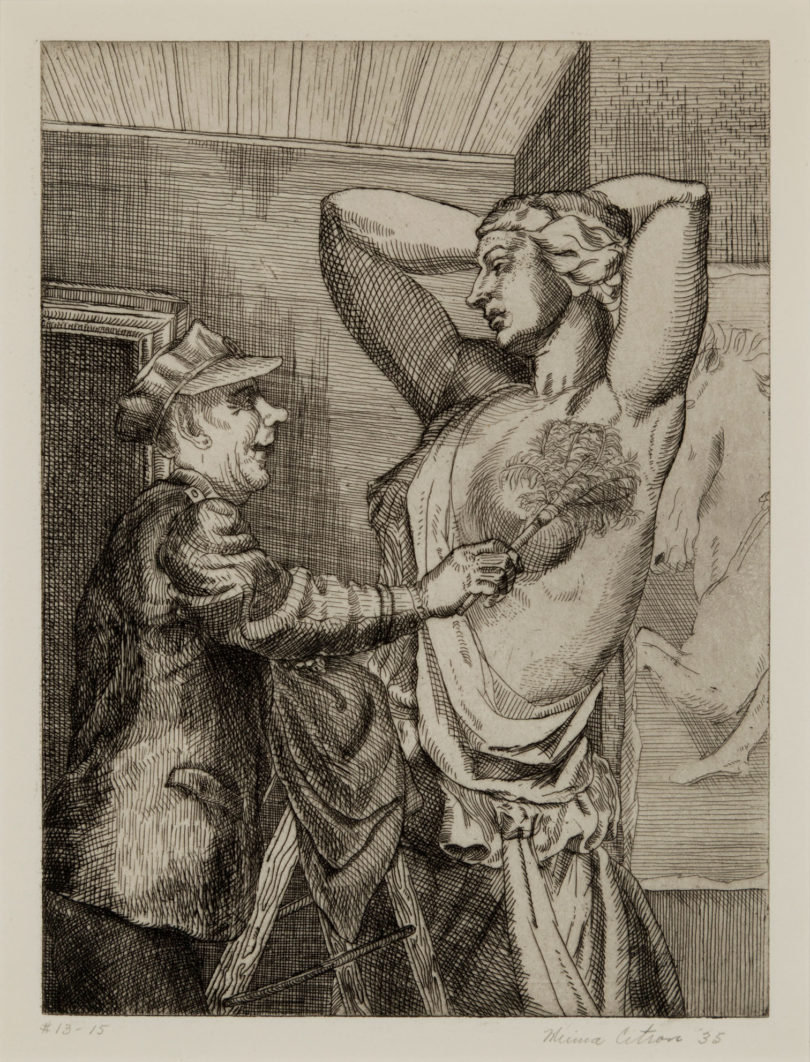 The Georgia Museum of Art at the University of Georgia will exhibit 50 works by American painter and printmaker Minna Citron from Dec.8-March 21. This retrospective exhibition, organized by the Juniata College Museum of Art in Huntingdon, Pa., will feature paintings, prints, drawings and mixed media constructions the artist created during her more than 60-year career.

The show sheds light on a historically important 20th-century American artist who is increasing in prominence. A lifelong, self-proclaimed feminist, Citron was a divorced mother and an artist who believed strongly in individual expression.

“Her feminist perspective in her early works came about simply via applying a female viewpoint, as a mother and a housewife, to her American scene images of everyday life in New York City,” said Paul Manoguerra, chief curator and curator of American art at GMOA, who serves as in-house curator for the exhibition. “Later, her abstract expressionist creations were about her emotions, her actions and her ideas as a woman and a person.”

Born in 1896 in Newark, N.J., Citron studied at the Arts Student League of New York under artists John Sloan and Kenneth Hayes Miller. In the 1930s, she began her career working in a social commentary representational style as a member of a group of artists known as the Fourteenth Street School. These early works were radical and edgy, often challenging the role of women in satirical critiques of contemporary society.

In the 1940s, Citron was part of the first generation of New York Abstract Expressionists, working alongside other well-known artists such as Jackson Pollock and Mark Rothko. Her interest in psychoanalysis and Freudian theory burgeoned during this time and later served as a source of inspiration in her abstract art.

“Citron had a profound interest in the spiritual and personal aspects of the act of painting and in the subconscious and unconscious self in ways that parallel the interests of Pollock and Rothko,” said Manoguerra.

In the 1960s and 1970s, Citron shifted away from painting and started making collages and mixed media constructions. Despite the change to a more abstract mode of representation, she continued to address women’s issues and perspectives in her works of art.

The exhibition will cover each phase in Citron’s career as an artist. The display will be organized chronologically to provide a sense of her career and her evolution as an artist. Juniata College is also publishing an exhibition catalogue in conjunction with the show.

All of the works in the exhibition came from the collection of the artist’s granddaughter, Christiane H. Citron, the art executor for the estate of Minna Citron.

“We took the exhibition as a venue because we want to help contextualize Citron and our 1956 oil on panel, ‘Astralti,’ which is currently on display in the Orkin Gallery,” said Manoguerra. “It is an opportunity to appreciate a little-known, yet very important 20th-century American artist.”

Museum Information
Partial support for the exhibitions and programs at the Georgia Museum of Art is provided by the Georgia Council for the Arts through appropriations of the Georgia General Assembly. The council is a partner agency of the National Endowment for the Arts. Individuals, foundations and corporations provide additional museum support through their gifts to the University of Georgia Foundation. The Georgia Museum of Art is located in the Performing and Visual Arts Complex on East Campus. The address is 90 Carlton Street, Athens, Ga., 30602-6719. For more information, including hours, see www.georgiamuseum.org or call 706/542-GMOA (4662).