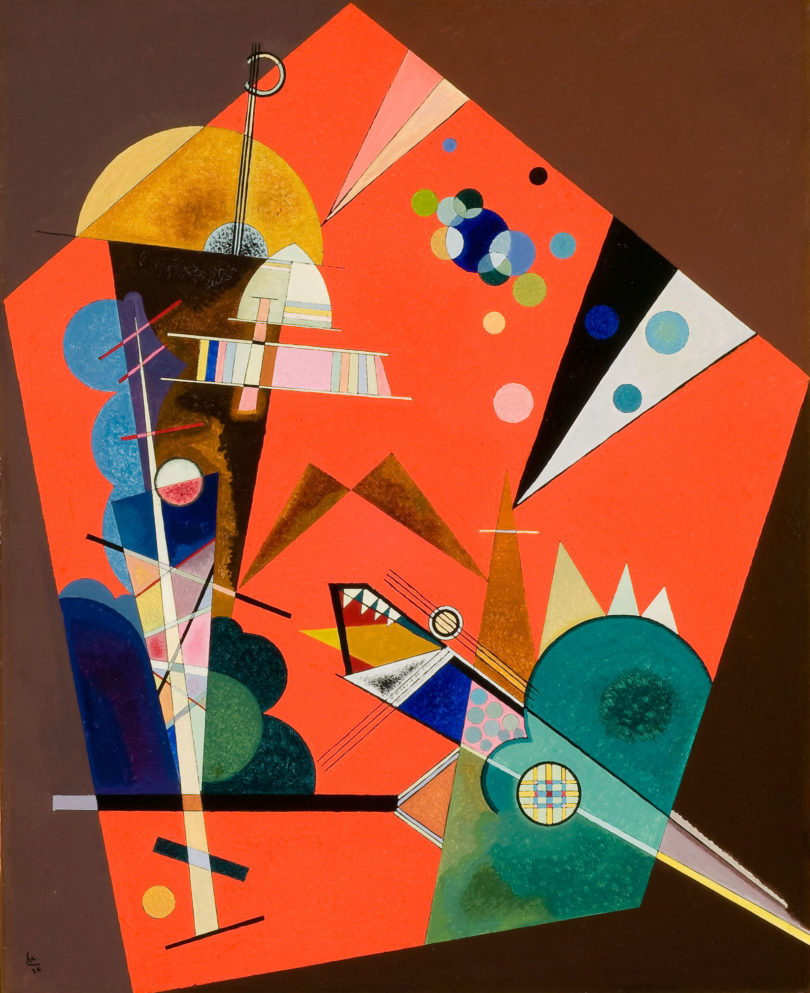 Wassily Kandinsky's "Tension in Red" will be part of the exhibition "Cercle et Carré and the International Spirit of Abstract Art" on display Oct. 12 through Jan. 5 at the Georgia Museum of Art. © 2013 Artists Rights Society (ARS)

Athens, Ga. – The Georgia Museum of Art at the University of Georgia will present the first major exhibition in the U.S. devoted to the art and activities of the group Cercle et Carré, “Cercle et Carré and the International Spirit of Abstract Art,” from Oct. 12 through Jan. 5.

“The exhibition will allow visitors the opportunity to view a dynamic assembly of abstract works of art rarely seen as a group and seldom discussed in relation to one another for more than 80 years,” said Lynn Boland, who organized the exhibition and is Pierre Daura Curator of European Art at the museum.

Cercle et Carré (which translates as Circle and Square) was founded in 1929 by Belgian artist and critic Michel Seuphor (1901-1999), Uruguayan-Catalan artist Joaquín Torres-García (1874-1949) and Catalan-American artist Pierre Daura (1896-1976). Consisting of about 80 artists, the group formed in opposition to Surrealism and, in its own words, to promote “structure and construction.” Members including Wassily Kandinsky, Le Corbusier, Fernand Léger, Piet Mondrian, Kurt Schwitters and Sophie Taueber-Arp sought to develop the theories of abstract art first advocated in the circles of Russian Constructivism and Dutch De Stijl. In addition to publishing a periodical to feature its theories and works, the group staged an international exhibition of abstract art in Paris from April 18 to May 1, 1930. Now recognized as a landmark event in the history of modernism in general and abstraction in particular, the exhibition included 130 works by 46 members of the group, diverse in nationality, style and medium.

“A compelling aspect of the Cercle et Carré group was its democratic nature,” said Boland. “Its members were male and female, emerging and established, from Western and Eastern Europe, North and South America and Russia.”

Organized around the works displayed in the original 1930 Paris venue and featured in the three issues of the group’s periodical, the exhibition includes work by 31 of the 46 participating artists, preserving the democratic character of the group. Lenders include the Centre Pompidou in Paris and the Stedelijk Museum in Amsterdam, among other institutions.

A catalogue published by the museum will accompany the exhibition. Because Cercle et Carré is seldom discussed in-depth, especially in English-language publications, this catalogue will present new research and a new perspective on works by both major and lesser-known artists. Funding for the exhibition and the catalogue is provided by the National Endowment for the Arts, the Irwin and Hannah Harvey Family Fund, the W. Newton Morris Charitable Foundation, the Friends of the Georgia Museum of Art and the Pierre Daura Center at the Georgia Museum of Art.

An opening reception hosted by the Friends of the Georgia Museum of Art is scheduled for Oct. 11, as is a one-day symposium on Cercle et Carré.

Museum information
Partial support for the exhibitions and programs at the Georgia Museum of Art is provided by the Georgia Council for the Arts through appropriations of the Georgia General Assembly. The council is a partner agency of the National Endowment for the Arts. Individuals, foundations and corporations provide additional museum support through their gifts to the University of Georgia Foundation. The Georgia Museum of Art is located in the Performing and Visual Arts Complex on the East Campus of the University of Georgia. The address is 90 Carlton Street, University of Georgia, Athens, Ga. 30602-6719. For more information, including hours, see www.georgiamuseum.org or call 706-542-GMOA (4662).