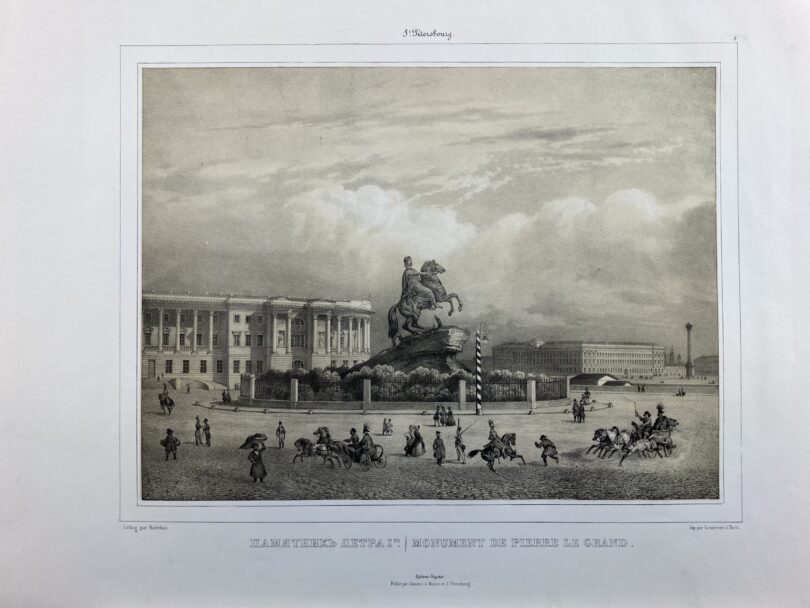 Two recent gifts to the Georgia Museum of Art have one common theme: life in mid-19th-century Russia. The next focused exhibition in the museum’s “In Dialogue” series, “In Dialogue: Views of Empire: Grand and Humble,” will display two print collections that create a conversation about what it meant to be a working-class citizen in Russia at that time.

The first gift is part of the Parker Collection, a major collection of Russian art donated to the museum, and includes 25 large lithographs depicting the imperial metropolis and neoclassical buildings of St. Petersburg. The second gift came from Marina Belosselsky-Belozersky Kasarda and Vladislav Kasarda and includes art that focuses on capturing the lives of individuals and their occupations during the 19th century. Thirty small, hand-colored lithographs show images of coachmen, porters, water carriers, innkeepers, firefighters and street peddlers, among others. They pay homage to a 16th-century tradition of printed images of the working classes, as with Annibale Carracci’s drawings of water carriers, wine sellers and other street peddlers in Bologna, Italy. 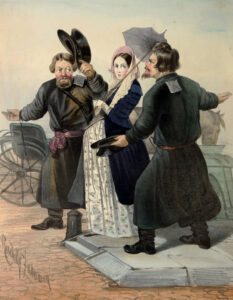 Parker Curator of Russian Art Asen Kirin researched the two gifts and discovered that they had both been issued by the same publisher, who had one office in St. Petersburg and another in Moscow and produced the prints in collaboration with a French partner, Lemercier à Paris.

A closer look at the two sets of work will reveal that many of the figures seen around the imperial buildings in the large lithographs look similar to the people featured in the small lithographs. The contrast between the elaborate, stately architecture and the brightly colored people would have invoked a sense of awe and belonging in viewers at the time.

“The restrained, yet highly nuanced color scheme of the large cityscapes adds a sense of formality and invites deference. At the same time, the vibrant colors in the small prints depicting working people evoke associations with everyday life. These works acknowledge and affirm class distinctions, yet simultaneously advance the notion of a shared unique national identity,” Kirin said

Associated events include a Family Day on Jan. 15 from 10 a.m. to noon (pick up a free Family Day To-Go art kit Thursday through Sunday or participate in Art Cart activities on Jan. 15; Family Day is sponsored by Lucy and Buddy Allen and the Friends of the Georgia Museum of Art) and a curator talk by Kirin on March 30 at 2 p.m. All programs are free and open to the public and are currently scheduled as in-person events. Free general admission tickets are still required, either at georgiamuseum.org in advance or at the desk in the lobby.