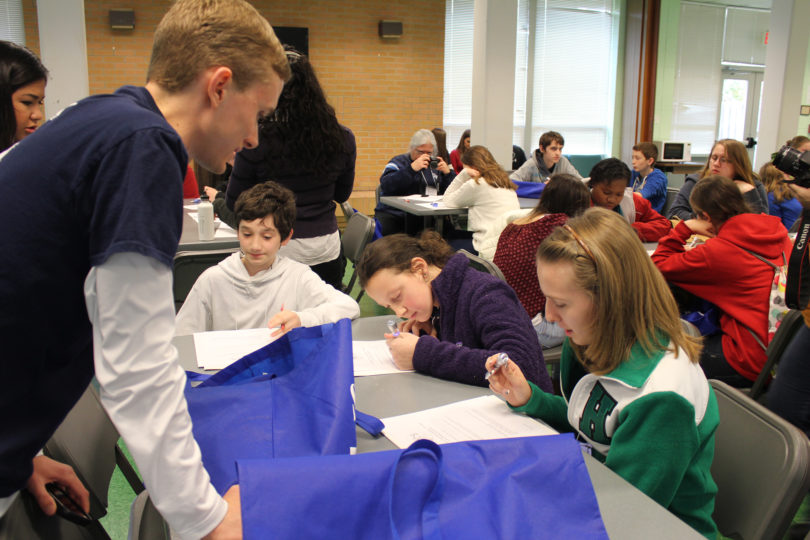 The event was sponsored by the UGA Marine Extension and Georgia Sea Grant, units of the Office of Public Service and Outreach, and organized by Georgia Sea Grant Marine Education interns Cara Lin, Beth Smith, Maeve Snyder and Sean Russell.

All of the day’s activities focused on empowering youth participants with the knowledge, skills and resources needed to successfully launch ocean conservation projects in their own communities.

“The summit provides a unique opportunity for students to come together with their peers, learn about ocean conservation issues in their local communities and start to develop solutions for those problems,” said Russell, who earned his bachelor of science degree in biology in 2013 from the University of Florida, and founded the first YOCS in 2011 at Mote Marine Laboratory and Aquarium in Sarasota, Florida. “When we look at the big picture, it’s overwhelming and many people simply don’t know where to start. I think the most important thing we want students to take away from the summit is to just start somewhere and take action.”

Keynote speaker Cathy Sakas, chair of Gray’s Reef National Marine Sanctuary Foundation and co-founder of Ocean Exchange, a conservation advocacy group that links other organizations together to promote solutions to ocean conservation problems, kicked off the day. She provided participants with an introduction on how to effectively communicate messages regarding ocean conservation, as well as inspiring stories of ocean stewardship.

“The Georgia coast is small, but we have a major impact on the entire ecosystem,” she said. “You have already taken the first step in making a difference just by being here and learning about these important issues.”

In the afternoon, students had the opportunity to work on action plans for their own ocean conservation projects with mentors from numerous conservation organizations and activist groups. The projects ranged from organizing community cleanup efforts and rebuilding oyster reefs to raising awareness on preventing plastic pollution and marine debris.

“I came to the summit because I wanted to enhance my interest in marine biology and learn what I can do to take action and save the environment,” said Sarah Katherine Bass, a sixth-grader from the Habersham School in Savannah. “If this generation doesn’t take charge, then who will?”

Bass and two other students from the Habersham School plan to create a series of YouTube videos and other social media accounts that show the causes of marine debris and what it can do to the various animals in the ocean. Their goal is to encourage people to not just help the environment, but also spread awareness of marine debris and its impact.

After the event, students were connected to the Youth Ocean Conservation Team, a worldwide network of past summit participants and other ocean conservation advocates who are dedicated to protecting marine ecosystems. The team continues to provide support to participants throughout the year, connecting them to resources that support their projects and allowing them to collaborate with other young people who are passionate about similar conservation issues.

“Young people bring new ideas and an incredible enthusiasm to the field of ocean conservation,” said Russell. “I’ve been very impressed with how these students have stepped up and became leaders in ocean conservation. I truly believe that if each of us does one small piece, that can really add up to have a big impact.”

UGA Marine Extension and Georgia Sea Grant
The University of Georgia Marine Extension and Georgia Sea Grant are a state and federal partnership dedicated to conducting research, education and outreach to enhance coastal environmental, social and economic sustainability. As units of the Office of Public Service and Outreach at the University of Georgia, they help improve public resource policy, encourage far-sighted economic and fisheries decisions, anticipate vulnerabilities to change and educate citizens to be wise stewards of the coastal environment. Georgia Sea Grant is one of 33 Sea Grant programs throughout the country housed under the National Oceanic and Atmospheric Administration. For more information, see http://marex.uga.edu or http://georgiaseagrant.uga.edu.