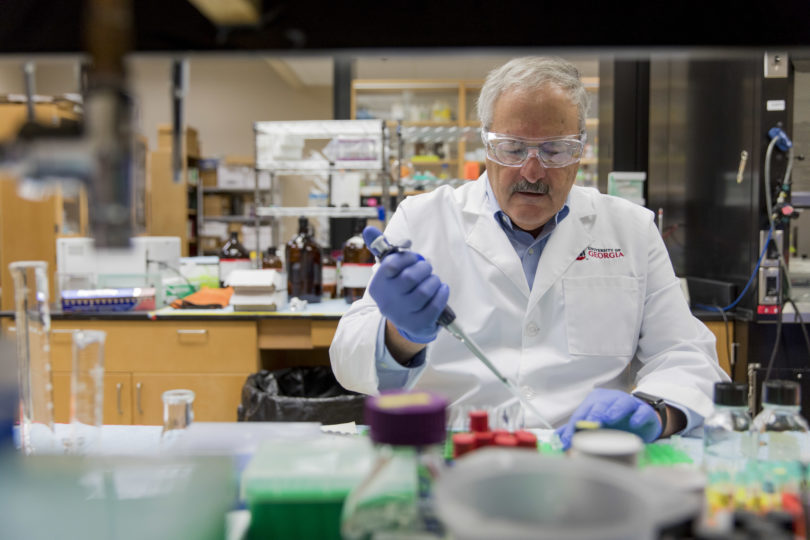 In October, the University of Georgia’s already impressive roster of Georgia Research Alliance Eminent Scholars is set to grow by one more member, when renowned cell biologist and biochemist Gerald Hart arrives from Johns Hopkins University to relaunch his lab at the Complex Carbohydrate Research Center.

Hart, who will be UGA’s 18th GRA Eminent Scholar and the sixth recruited to campus since 2015, is one of the world’s preeminent scholars of glycobiology, which is the study of sugar chains and their impact on living organisms.

“We continue to be grateful to GRA for its support as we recruit more of the country’s—and the world’s—top scientists to come to the University of Georgia,” said President Jere W. Morehead. “These individuals represent centuries of collective experience at the forefront of science and technology, and the benefits to Georgia that come from their working at our university are considerable and long-lasting.”

Hart earned his reputation in the early 1980s when he and a colleague discovered that the glycan O-linked N-acetylglucosamine (O-GlcNAc, pronounced o-gluck-nac) played a central role in adding carbohydrates to molecules within the nucleus and cytoplasm of cells. Since then, he’s investigated O-GlcNAc’s connection to diseases such as diabetes, neurodegenerative diseases like Alzheimer’s, and cancer.

Also, Hart is no stranger to CCRC, having served on one of its advisory committees since 1987, and he had high praise for the research center that he’ll soon call home.

“CCRC is the best place on the planet for doing glycoscience—there’s nowhere else like it,” Hart said. “It always comes down to the people. Every single faculty member at CCRC is a leader in his or her own field. When it comes to glycoscience, UGA is above what most institutions can do.”

“Jerry is one of the outstanding scholars in glycobiology, and he’s just a natural fit,” Darvill said. “He brings enthusiasm and a wealth of expertise that he can share with everyone here. He will interact with several other faculty and put in some rather large interdisciplinary grants in glycobiology, and that’s something we couldn’t do without him.”

Indeed, UGA’s growing cohort of GRA Eminent Scholars gives the university a potential research impact that it’s never enjoyed before, not only in the scientific advances emerging from their labs but the potential economic benefits for the state.

“Jerry will an excellent partner to the GRA Eminent Scholar academy,” said C. Michael Cassidy, president and CEO of the Georgia Research Alliance. “He is a respected thought leader in the field of glycoscience, and his work is instrumental in further understanding diabetes, cancer, cardiovascular and neurodegenerative diseases.”

“I’m thrilled to welcome Jerry Hart to UGA and to help him get his extensive research program up to speed as quickly as we can,” said Vice President for Research David Lee. “His arrival is just another example of how we are committed to our research mission, and I look forward to watching his impact on the faculty and students who work with him.”