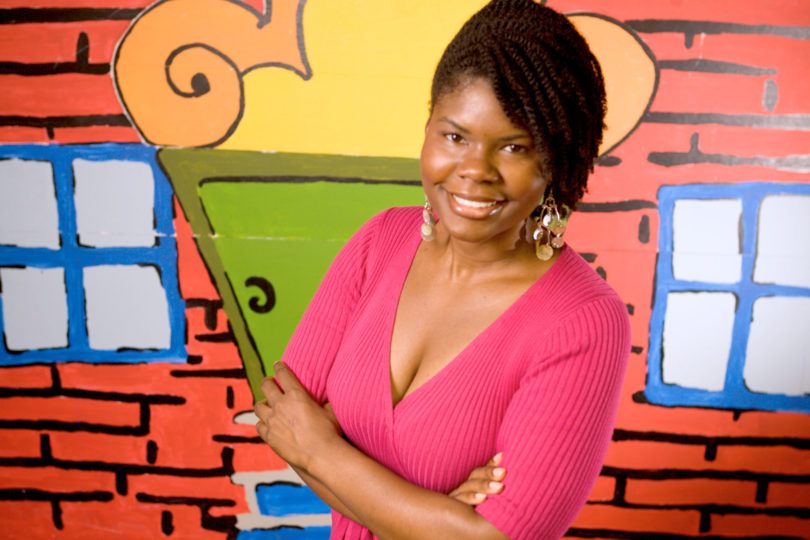 Keisha wants to join her school track team, but poor eating and exercise habits may prevent her from having the energy and stamina she needs to be successful. With the advice and support of friends and family members, Keisha learns how better nutrition combined with a variety of exercise routines leads to success.

“Getting on Track” is the brainchild of a group of middle and high school students who spent the month of June working daily with Careé Jackson, a doctoral student in the foods and nutrition department of the UGA’s College of Family and Consumer Sciences, learning both about good nutrition and how to channel their knowledge into a play they performed for family and friends.

Jackson’s project was one of several that occurred at Camp Summer Spree Horizons, a four-week camp hosted by founder Becky Lockman at her Oconee County home. The camp is in its third year and provides four weeks of fun and learning for 30 low-income adolescents between the ages of 10 and 15.

The campers rotated through a series of activities each day, including Jackson’s program, allowing them to work in small groups of five. Jackson spent about 40 minutes a day with each group.

“We would make healthy snacks from simple recipes they could take home. We also had games that involved reading the labels on foods and talking about things like how much fat or fiber a honey bun has compared to a granola bar and why that matters,” Jackson says. “We also did physical activities. The important thing was for them to learn that it’s easy to include exercise and good nutrition in your schedule.”

But beyond the lessons, ­Jackson also taught the campers about script-writing.

“We started out reading scripts that were already written,” Jackson says. “They loved doing that.”

Then they began using short scenarios provided by Jackson to develop their own play. ­”Adolescents need structure to get started, so I would create a scenario of two or three sentences for them to build a scene around,” she says.
Jackson also took notes.

“It’s hard to get adolescents to actually write down dialogue,” she says. “So, I would write it down for them. What was interesting was how surprised they were when they realized they had done the work, that they were the writers, I had just written down what they said. A lot of times, adolescents think writing is hard. I think this showed them that it doesn’t have to be.”

At the end of the four weeks, the campers performed “Getting on Track” for family and friends who joined them for a cookout celebrating the end of camp.

While the play was an important part of the campers’ experience, Jackson and Lockman agree that their ultimate goal is helping those attending Camp Summer Spree find a sense of self-care and self-respect.

“I loved hearing them talk comfortably about which snacks are ‘sometimes’ snacks and which ones are ‘anytime’ snacks,” Jackson says. “That told me the message is getting through. They’re learning that they don’t have to deprive themselves of treats, but they can balance those treats with nutritious food that tastes good.”

The Camp Summer Spree Horizons experience served as a pilot project for Jackson, whose goal for her dissertation is to work with a group of adolescents for several months, teaching them about nutrition and exercise while helping them develop a “dinner theater” project that would include writing and performing a nutrition-based play while also developing the menu for the audience.

“Young children can learn by being presented a play,” says Jackson, who developed Lil Red Ridin’ Thru Da ‘Hood, a nutrition-based script that includes interactive components for the audience as a part of her master’s thesis. “But once kids get to middle school, they identify more with peer-led activities where they have more ownership. They need to participate and have input into projects to learn more effectively.”