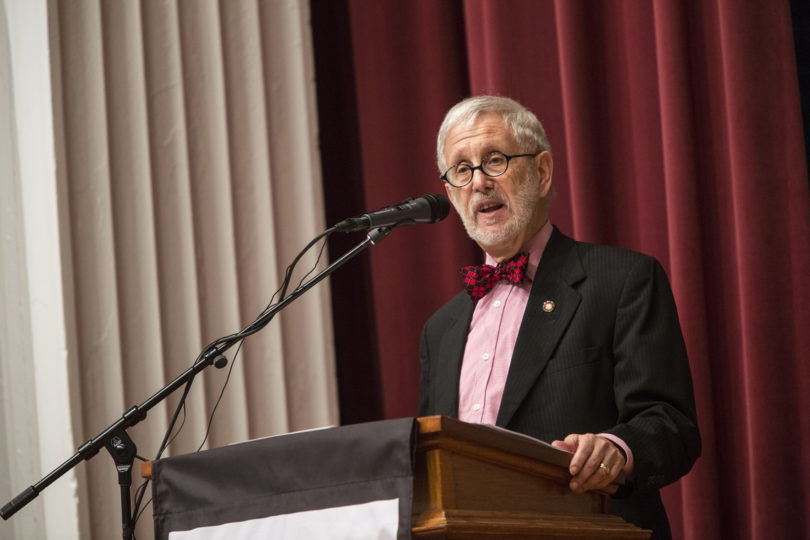 The two speakers at the Jan. 26 Founders Day Lecture praised the past accomplishments of the university and suggested ways to make it stronger in the future.

A native New Yorker, Paul M. Kurtz, associate dean and professor emeritus in the UGA School of Law, reflected on his experience living in the South for 50 years and commended the university he served for 40 years.

“The University of Georgia is merely the best part of the best town in Georgia,” said Kurtz, who was hired at UGA in 1975.

The Founders Day Lecture was part of Founders Week, which this year marked the 230th anniversary of UGA as the first state-charted university in the nation. The lecture was sponsored by the UGA Alumni Association and the Emeriti Scholars, a group of retired faculty members known for their teaching abilities.

During his humor-filled lecture, Kurtz said that after 50 years in the South, he still doesn’t consider himself a Southerner, but “I believe that over the years, Dixie and I have reached an understanding.”

Kurtz listed some reasons he appreciates the South: The warmth of the people and the cuisine—he likes grits but not pimento cheese. He also listed a few dislikes such as Southern politics and the pro-gun culture.

But then Kurtz took a more serious tone as he described his admiration for the university he served for decades.

“Our university has been the center of higher education in this state for well over two centuries,” he said. “The last 40 of those years have seen a gigantic step forward on this campus.”

“I’m exceedingly proud of being a very small part of the maturing of this wonderful institution of higher learning,” he said.

Kurtz also praised the city of Athens for its architecture, commitment to serving others, arts and culture.

“Athens is a place to which all Georgians gravitate, especially those who have attended school here,” he said.

A Chestnut Mountain native and self-proclaimed “hunting, red-voting, wear-khakis-to-the-football-game” kind of Georgian, Miller offered a homegrown perspective on the university to contrast Kurtz’s outsider view. But the two came to similar conclusions.

As a Georgian, Miller said, he knows the university means a boost to state economic development and the development of state leaders.

“And it provides an education that is on par with any in this country and at an affordable level,” he said.

Looking into the future, Miller also said the university should remain vigilant in its effort to serve students.

Miller applauded efforts to make experiential learning a bigger part of the student experience. He encouraged faculty and staff to mentor students as a way to open lines of communication.

He also warned about the rising costs of education, including tuition and fee increases.

“With an improving economy and in turn, hopefully, improving state support, this university must be mindful to balance tuition and fees with maintaining that value for students,” he said.