You may never have heard the name Glenn Burton before, but you’ve almost certainly seen his handiwork.

In a career spanning more than six decades, most of which was spent as a professor at the University of Georgia’s Tifton campus, Burton established himself as one of the world’s most prolific agricultural scientists, and you don’t have to search long to find one of his creations.

From championship golf courses and international venues like the Olympics and the World Cup to the turf that adorns the playing surface in the University of Georgia’s Sanford Stadium, Burton created new grass varieties that have become the international standard for excellence in the sporting world. 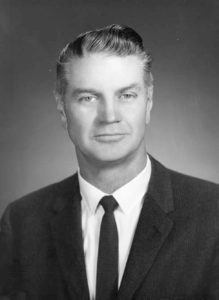 But the scientific genius that allowed Burton to create lush green fairways on golf courses and turf capable of withstanding punishment on the gridiron also enabled him to develop new crop varieties that fed millions of hungry people during a time when the world was struggling to produce enough food for a rapidly growing population.

He saved countless lives during the “Green Revolution” of the 1960s, and Burton’s many contributions continue to inspire scientists working to create a more dependable food supply today.

“Helping feed the hungry of the world is my greatest accomplishment,” Burton is quoted as saying. “It was important to me because I saw those hungry people, and I was able to help them.”

In 1982, Burton was awarded a National Medal of Science by President Ronald Reagan “for outstanding contributions to the biological sciences that have helped to feed the hungry, protect and beautify the environment and provide recreation for millions.”

Burton’s story began, appropriately enough, on his family’s farm in Clatonia, Nebraska. He was born Glenn Willard Burton in 1910, the only child of Joseph and Nellie Burton, and he worked the land alongside his parents using horse-drawn equipment.

He attended a one-room country school through the eighth grade before graduating from high school in 1927. Burton received his bachelor’s degree from the University of Nebraska in 1932 and moved to Rutgers University, where he received his master’s and doctoral degrees in 1933 and 1936, respectively.

Burton and his wife, Helen, moved to Georgia following his graduation, where he would spend the remainder of his career on the UGA College of Agricultural and Environmental Sciences Tifton campus developing new and innovative plant varieties for agriculture and recreation. 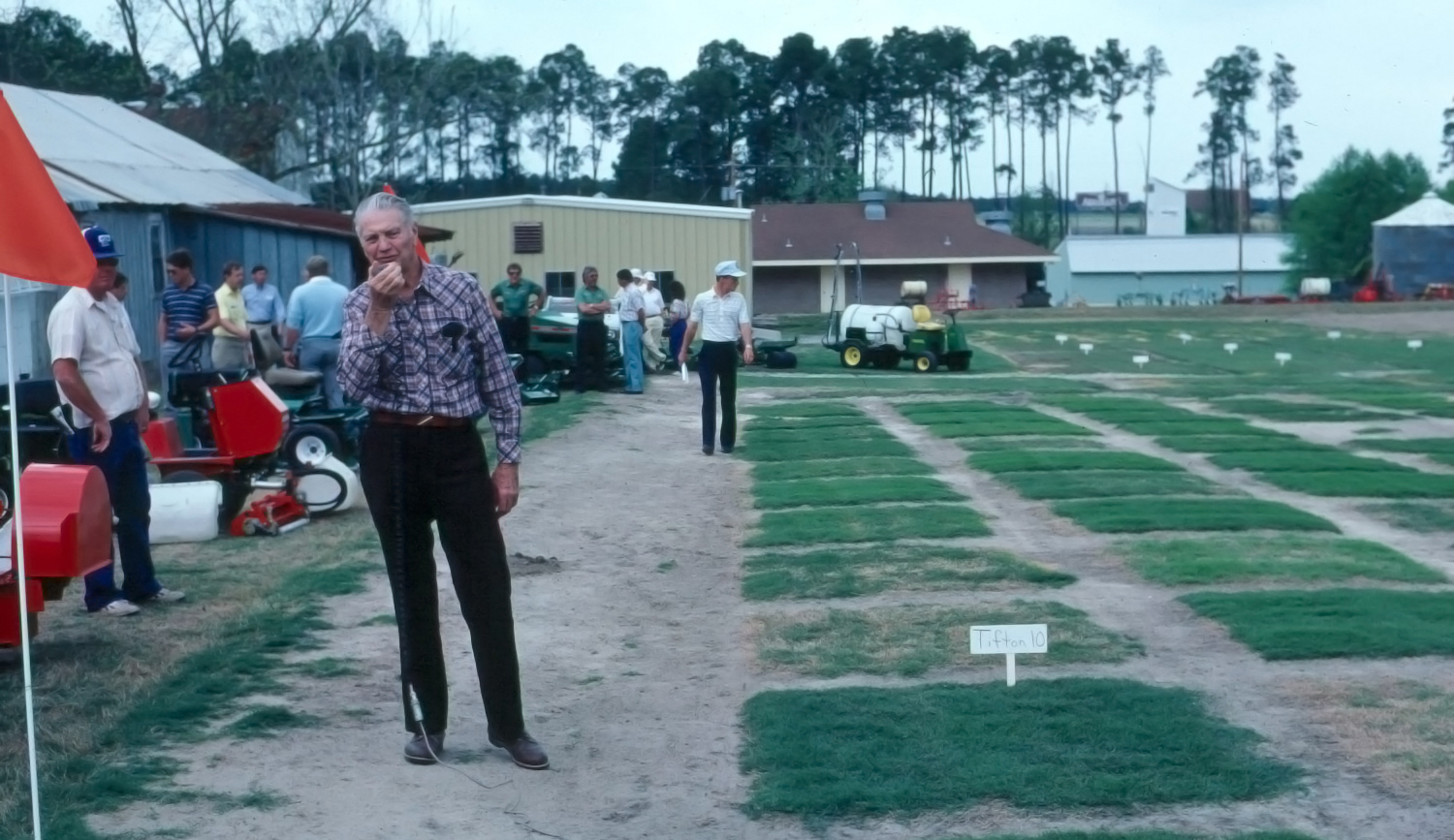 Glenn Burton displays his Tifton 10 grass at a turf conference. From the USGA: “In 1974, Dr. Burton left his office at the Coastal Plains Experiment Station for a trip to China to collect interesting bermudagrass plants. He found a clone in a home lawn in Shanghai that looked interesting to him. This plant remained one of many in his collection until he and colleague Dr. Wayne Hanna learned that some of its unique characteristics would make it ideal for use on athletic fields and other low-input locations where bermudagrass is desirable. The variety that emerged from Dr. Burton’s China sample was named Tifton 10 upon commercial release in 1988.”

“I don’t think I’ve ever met a person or known a person that was more dedicated to research than he was,” said Wayne Hanna, a professor of crop and soil sciences who worked closely with Burton for a number of years. “He didn’t watch television, he only read scientific literature and his only real hobby was gardening.” 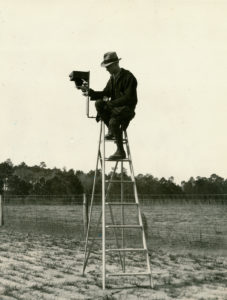 Glenn Burton’s “Grass Breeding Report” from 1936 shows him setting up his camera in the field to take photographs to document the spread of grasses.

Burton spent almost every waking hour thinking about ways to improve plants, and he would happily share his love of science with anyone willing to listen.

“He was sitting at a table next to me at a wedding, and I overheard him telling guests the details of reciprocal recurrent phenotypic selection,” Hanna said. “I don’t think they had a clue what he was talking about, but that’s just how passionate he was about his work. He would talk about it nonstop if you let him.”

And his was a passion that changed the world.

By 1960, Burton became one of the most sought-after experts on plant genetics, breeding and development. He traveled to more than 50 countries, where he would consult with researchers and students about crop improvement.

It was also a time of great concern. The world’s population was growing at an unprecedented rate, and scientists issued dire warnings about the possibility of mass starvation unless farmers could find a way to produce more food. 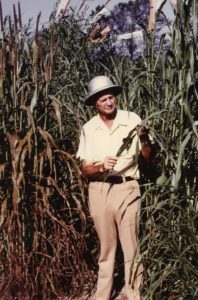 Glenn Burton’s work with pearl millet enabled countries such as India to double and even triple their output of grain, saving the lives of millions.

Burton had been working on different varieties of pearl millet, a grain crop grown in many parts of Asia and Africa, and he developed a partnership with scientists from the Rockefeller Foundation who were working to increase crop yields in developing countries.

Burton gave Rockefeller scientists a packet of pearl millet seeds that he had developed in Tifton, a cross between U.S. versions of the crop and Indian cultivars, which could grow in climates once considered too arid for grain production.

Indian farmers began experimenting with his seeds, and the results were nothing short of astonishing.

Pearl millet production increased from 3.5 million metric tons in 1965 to 8 million metric tons by 1970. From the seeds Burton provided, Indian scientists were able to produce new hybrid plants that yielded 88 percent more grain than other varieties.

Burton’s work on pearl millet and Nobelist Norman Borlaug’s work on wheat are credited with helping to prevent famine in India, according to Arnel Hallauer, Burton’s biographer and Distinguished Professor Emeritus at Iowa State University.

From farmland to fairways

While helping to feed the hungry of the world may be Burton’s greatest legacy, it is not his only one. He led an extraordinarily productive laboratory at UGA’s Tifton campus, which celebrates its centennial this year, and his discoveries proved invaluable for the region’s agricultural industry.

When he arrived in Tifton, he quickly realized that the cattle industry in the Southeast suffered from a lack of quality forage grass, and he began experimenting with bermudagrass around 1936 to help solve the problem. 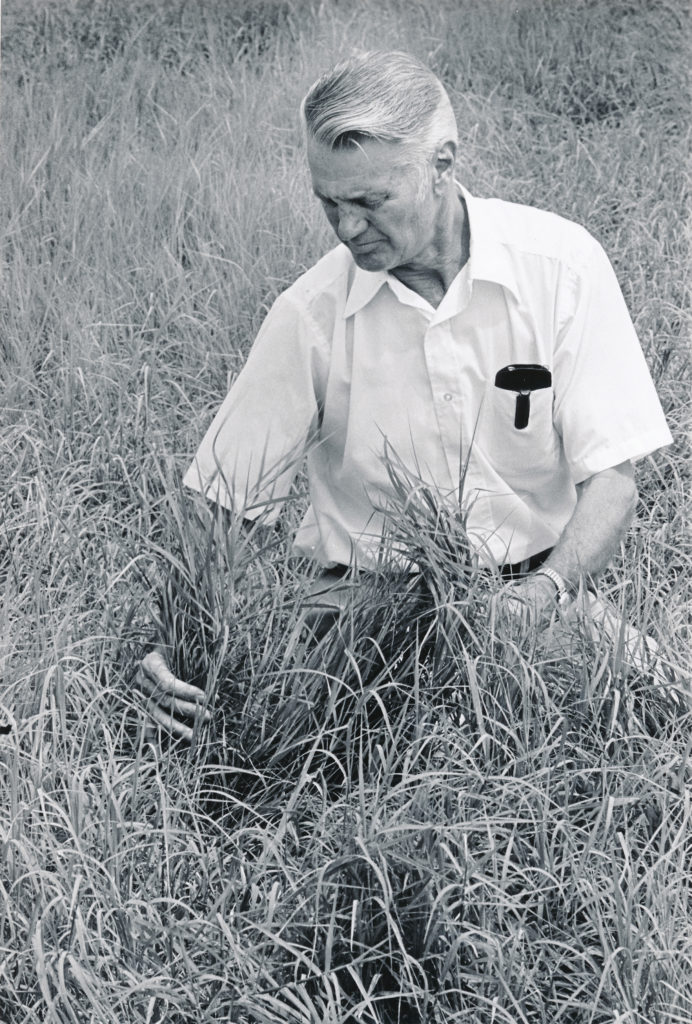 Bermudagrass was a controversial choice, because at the time it was considered an invasive weed that plagued crop farmers. Seeds from bermudagrass would blow into fields and, if not dealt with quickly, could overtake farmland and destroy crops.

But in just a few years, Burton managed to create a hybrid grass that was a mixture of local grasses and grasses taken from South Africa. It had to be propagated by planting sprigs, not seed, so it was unlikely to invade neighboring fields. The grass more than doubled forage production in the American South, and farmers planted millions of acres with Burton’s creation.

“He completely revolutionized the cattle industry in the Southeast,” said Hanna. In effect, Burton had taken one of the region’s worst weeds and turned it into one of the world’s best forage grasses. 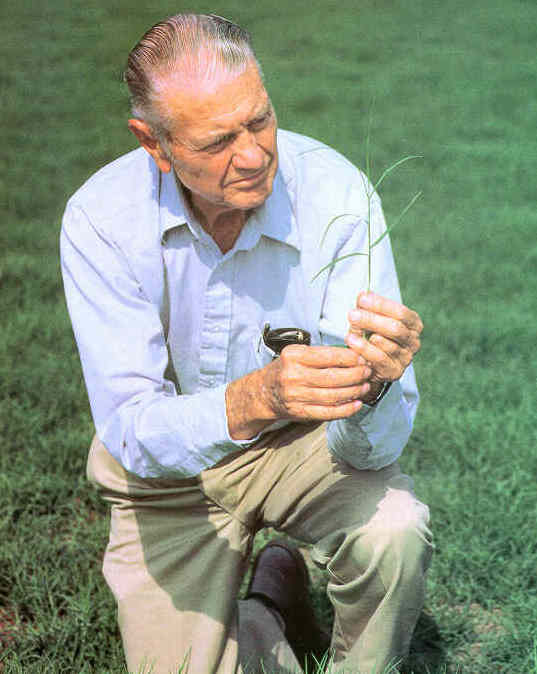 Glenn Burton with his Tifton 85 bermudagrass.

Burton would continue his research on grasses, releasing newer and better varieties, including Tifton 85, which remains one of the top forage grasses in the world.

News spread quickly about Burton’s expertise, and he was approached by the United States Golf Association, which offered him $500 a year to research new grasses for golf greens, tees and fairways. Never one to shy away from an opportunity to conduct more research, Burton agreed.

Things weren’t so great for southern golfers at the time. Many putting greens were nothing more than compacted sand that were painted green to give the illusion of a traditional putting surface.

But Burton’s ingenuity quickly remedied that situation. He produced a number of hybrid bermudagrasses that still adorn courses throughout the South.

“He was looking for specific characteristics [in grass] that would enable the golfer to play a better game of golf,” said Earl Elsner, an agronomist who worked for more than 30 years at UGA. “I don’t think Dr. Burton ever played a game of golf, but he studied it, he talked to people, he discussed it with superintendents to the point that he understood what the golf game required.”

A life of service

His tireless work ethic combined with his insatiable scientific curiosity made Burton a giant in his field, but you’d never know it.

“I remember him talking with local farmers on the phone at night … trying to help them figure out a problem or giving them advice,” said Glenn Burton’s son Robert Burton. “Dad always had time for anyone.”

It was the work that ultimately gave Burton the greatest satisfaction – the never-ending quest for something better, something stronger, something that would help more people.

Before his death in 2005, he and his wife established the Glenn and Helen Burton Feeding the Hungry Scholarship, which is awarded to doctoral students at UGA whose research involves the development of food crops.