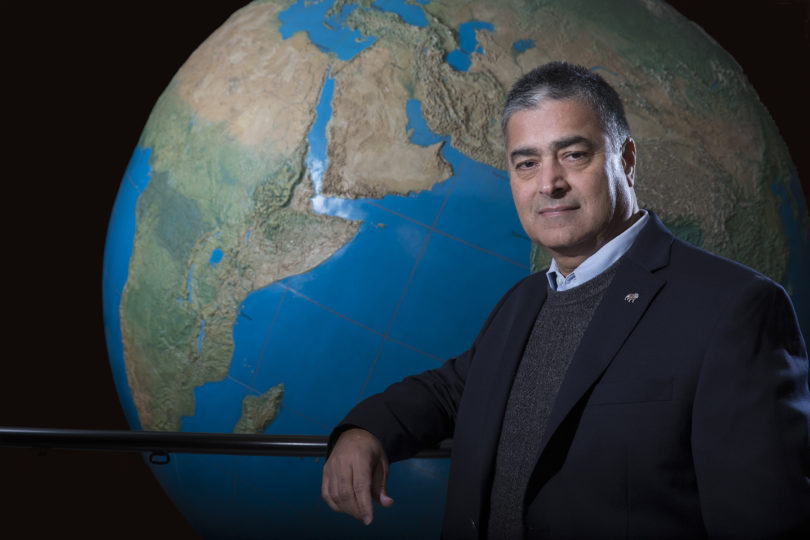 The new head of the Office of Global Programs in the College of Agricultural and Environmental Sciences, Bart said much of the research underway at the college has implications for the international arena.

“We need to establish the relationships necessary to ensure that work helps both the international community and the state of Georgia,” he said.

Bart’s international experience dates back to childhood when he moved to Atlanta from Nepal after his father took a job at the Centers for Disease Control. After attending Earlham College as an undergraduate, Bart earned his master’s degree in aquaculture at Auburn University. He was interested in developing alternative food production methods to feed more people.

He worked at the University of Kentucky on a project focused on improving Indonesia’s fisheries and aquaculture educational programs before returning to Auburn to earn a doctorate in aquaculture and a second master’s degree in agricultural economics.

“I realized that it wasn’t enough to understand the biology of raising fish or their reproductive physiology,” Bart said. “I needed to understand resource flows and production economics if we are to feed the hungry world.”

As a faculty member at the Asian Institute of Technology in Thailand and director of its Vietnam campus, Bart learned the value that a strong reputation can provide an institution, its faculty and students.

During his 15 years with the Asian Institute of Technology, Bart established his own network of relationships, particularly with graduate students.

“Graduate students from many countries would come to (the Asian Institute of Technology) for their course work, but we encouraged them to return to their home institutions to conduct their lab work and field work,” he said. “As their major professor, I would visit their research sites, which meant I spent days and weeks with both my students and their colleagues learning not only about the data they were generating but also their cultures and traditions.”

Not only did those relationships result in long-term friendships, they also opened doors to a variety of collaborations, particularly as those former students rose through the government and academic ranks in their home countries. For example, Bart recalls a master’s degree candidate who, upon finishing his degree, returned to Burma and became one of the country’s most successful fish farmers.

“This former student has helped his country significantly by growing this industry,” Bart said. “He also continues to contribute to the institute by bringing visitors and supporting the university’s research efforts.”

Bart plans to work with faculty and administrators at UGA to develop similar relationships.

“We need to build from what we have,” Bart said.

He uses as an example the Peanut Mycotoxin Innovation Lab, which received a $15 million grant last year to work in Haiti, Ghana, Mozambique, Malawi and Zambia.

The university also has international research projects underway in the fields of poultry and plant genomics.

“A goal of the Office of Global Programs is to expand those international relationships in a way that supports both the faculty and the university,” he said.

Increasing UGA’s visibility internationally will benefit both the university and the state in multiple ways.

“When you have programs that are recognized as being innovative and having substance, opportunities come your way,” he said. “If we’re not creating opportunities for our young scientists to have strong international links, they are going to miss out.”

Those international links go beyond the research lab.

At the undergraduate level, CAES offers study abroad programs and hopes to attract the increasing number of international students studying in the U.S.

“UGA is in the enviable position of having competition for its seats,” he said. “However, fewer than 1 percent of our undergraduate students are from other countries.”

That’s too bad, Bart said, because international students can be a “conduit for sharing ideas and developing businesses collaboratively.”

Similarly, the state benefits from Georgia students who have had extensive international experiences.

“Poultry, cotton and peanuts are all global commodities. Companies want employees who can communicate across nations and across cultures,” Bart said.

One way to enhance students’ global awareness is through the immersive international experiences offered through the certificate in international agriculture program and study abroad programs, both of which are open to CAES undergraduate and graduate students.

Bart’s office also oversees the Peace Corps master’s degree in international agriculture, which allows students to take a year of graduate courses prior to their two-year Peace Corps assignment. After returning, the master’s candidates may use their Peace Corps experience as the basis for their thesis or as the internship requirement for a non-thesis degree.

“CAES has made a commitment that each department will offer two study abroad programs,” Bart said. “Part of our office’s role is to support the departments to ensure that these are high-quality, immersive opportunities that provide students the opportunity to learn about a different culture, in addition to learning more about themselves.”

Since arriving at UGA seven months ago, Bart already has been creating connections between UGA and his former colleagues.

This summer he led a contingent to Thailand, Vietnam and Myanmar that included CAES Dean Scott Angle. Among the accomplishments of that initial trip is a program that is expected to result in the Vietnamese government paying for graduate students to complete their doctorate in agriculture-related fields at UGA.

In January, Bart will lead another trip, this time to Indonesia and China, with the goal of establishing additional networks with university and government agencies.

“I’ve only been at UGA for a short period and I’m learning about the research and the faculty who have international ties,” Bart said. “But as I interact with more people, and as the faculty learn more about the Office of Global Programs, we will find more ways to work together to enhance our international visibility and success.”