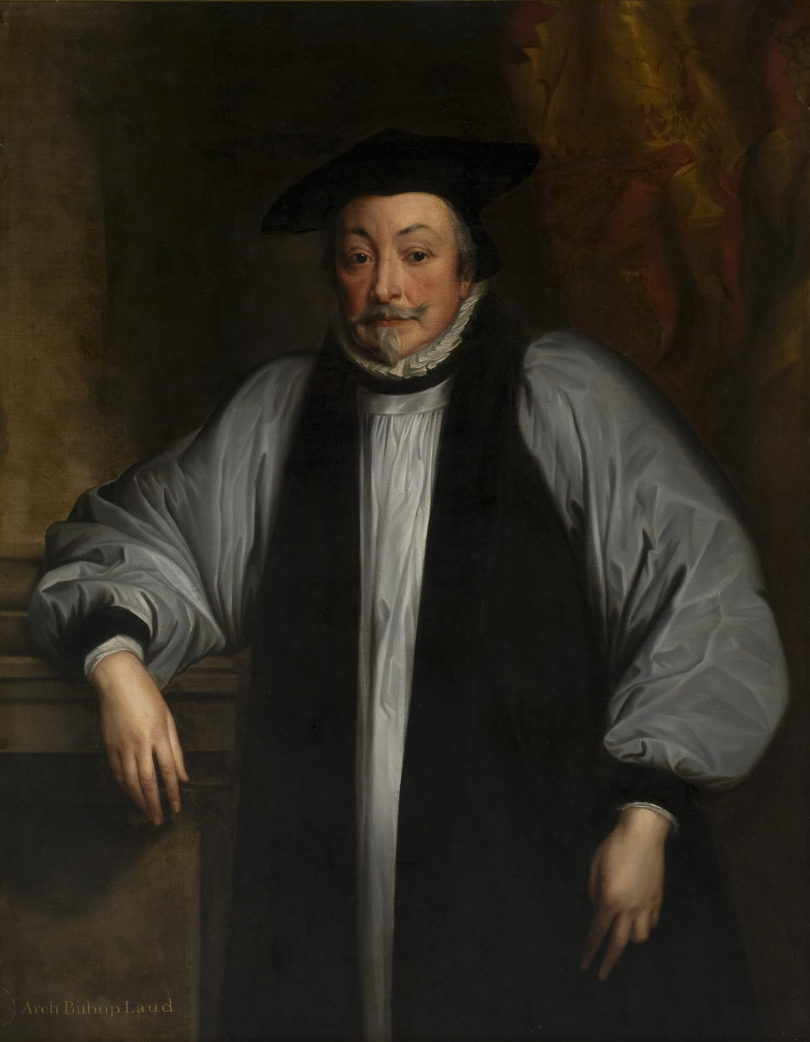 This portrait of Archbishop Laud by Anthony van Dyck and studio was added to the Georgia Museum of Art's collection in 2015.

Athens, Ga. – In 2015, the Georgia Museum of Art at the University of Georgia added 320 objects to its permanent collection through gift or purchase. Of note, these objects include a 17th-century portrait by Sir Anthony van Dyck and his studio and an American Impressionist painting by Frederick Carl Frieseke. Both paintings will be on view in the museum’s permanent collection galleries starting Jan. 13.

The former painting, a large portrait of Archbishop William Laud, was donated to the museum by Daniel and Betty Byrd of Atlanta. Van Dyck, a native of Antwerp, Spanish Netherlands, became the premier court painter in England under the patronage of King Charles I. Trained as an artist from the age of 10, he opened a studio with his friend and fellow artist Jan Brueghal the Younger by the age of 15. While working as an assistant to the Flemish artist Peter Paul Rubens, Van Dyck is said to have restored a damaged painting so perfectly that Rubens did not realize it had been repaired until many years later. This version of the painting is one of several existing copies by the artist’s studio, after what is believed to be the primary version, at the Fitzwilliam at Cambridge. The details of its commission are not currently known, but it was recorded as part of the collection of the Earl of Sandwich at Hichingbrook in 1876, and was likely there prior to 1830. Lynn Boland, the museum’s Pierre Daura Curator of European Art, points out that the hands and face are likely by Van Dyck himself and that studio copies were common practice at the time.

The sitter for this painting, Laud (1573-1645), served as Archbishop of Canterbury under the reign of King Charles I of England from 1633 to 1640. Laud worked closely with the king to root out nonconformity in the Anglican Church, but his policies put him in conflict with Puritan leaders who thought his methods and doctrine dangerously close to those of Roman Catholicism. In 1640, Parliament charged Laud with treason and imprisoned him. Unable to find specific evidence, the lawmakers passed a bill declaring Laud guilty and punishing him without a trial. He was executed by beheading in 1645 despite being granted a royal pardon. The painting is on display in the museum’s H. Randolph Holder Gallery.

“This world-class example of 17th-century portraiture, offering multiple avenues for interdisciplinary study, will serve as a lynchpin for the museum’s small but important collection of European painting,” said Boland. “Acquisitions of this significance would be beyond our reach were it not for the generosity of donors like the Byrds.”

The museum purchased Frieseke’s “Girl Sewing (The Chinese Robe)” with funds given by the Chu Family Foundation. David Chu is a Distinguished Research Professor Emeritus in UGA’s College of Pharmacy. He and his wife, Jane, made this financial gift through their family foundation with the specific goal of the museum purchasing a significant American painting. It will be unveiled at an event in the galleries on Jan. 13 at 11 a.m.

“Frieseke was an important force in American Impressionism, particularly among those Americans working in the colony of Giverny, France, adjacent to Claude Monet’s gardens,” said Sarah Kate Gillespie, curator of American art. “He enjoyed great popularity on both sides of the Atlantic. This particular work not only fills what had been a major gap in the genre within our collection, but also very much complements our current holdings in American Impressionism.”

Other notable additions to the museum’s collection in 2015 include:
• A large collection of turned wood art that will make up the exhibition “Turned and Shaped: Wood Art from the Collection of Arthur and Jane Mason,” opening at the museum May 14.
• A painting by Georgia artist Alan Campbell of UGA’s Four Towers barn (now the UGA Visitors Center).
• Lyell Carr’s painting “Returning Home at Sunset.”
• An untitled etching by Paula Modersohn-Becker, an early German Expressionist artist whose works are extremely rare.
• Four plates and a platter designed by Italian artist Giò Ponti.
• A large painting by Atlanta artist Brendan O’Connell, best known for his images of Wal-Mart interiors.
• Two sculptures and a large charcoal drawing by George Segal, currently on display in the exhibition “George Segal: Everyday Apparitions.”
• A large painting by American abstractionist Adja Yunkers.
• George Washington Nicholson’s 19th-century American genre painting “Winter Morning.”

**Updated Jan. 20, 2016. A previous version of this release was less specific about the authorship of the Laud portrait.