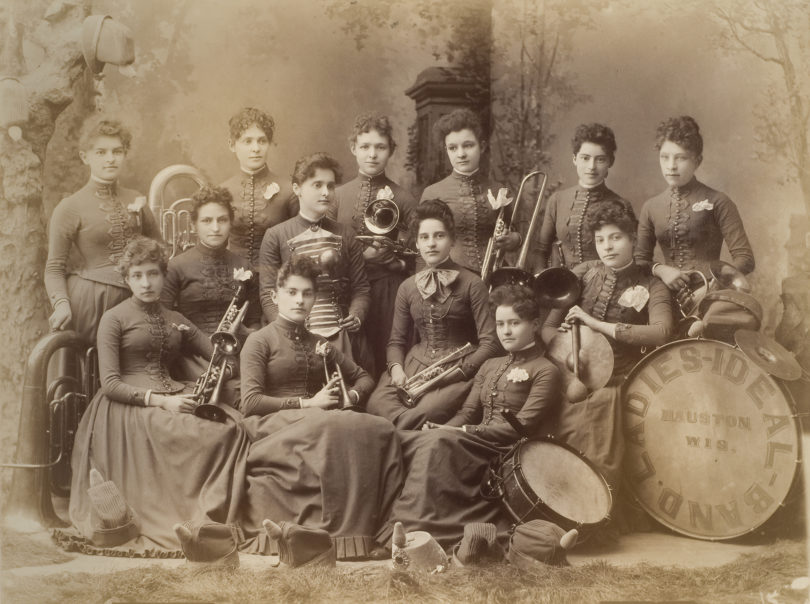 A photograph of the Ladies Ideal Band from 1888 Muaston

Athens, Ga. – The Georgia Museum of Art at the University of Georgia will present the exhibition “Before the March King: 19th-Century American Bands,” a collection of items that trace the history of early American concert bands from their inception in the 1830s until their decline at the turn of the 20th century. It will be on display at the museum from Oct. 10 through Jan. 3.

The exhibition takes its name from the nickname of bandleader John Philip Sousa, known as “the March King,” who is best known for composing “The Stars and Stripes Forever.” Although many people believe Sousa is the story of 19th-century American band music, he had both predecessors and followers.

The “Golden Age” of American bands began after the American Civil War and continued until the turn of the century. The bands of this era provided one of the most popular forms of entertainment, often touring the country and drawing great crowds wherever they stopped. The World’s Peace Jubilee and International Musical Festival of 1872, for example, which took place in Boston, was held in a venue with a seating capacity of 100,000, erected specifically for the event.

George Foreman, the director of UGA’s Performing Arts Center, has worked to amass paintings, prints, illustrated sheet music, vintage instruments and photographs related to the history of American bands for many years, and the exhibition comes entirely from his collection. Sarah Kate Gillespie, the museum’s curator of American art, selected the objects with Foreman’s help to tell the story of these bands.

“This exhibition offers a rich opportunity to trace the development of an important piece of American history through its material and visual culture,” Gillespie said. “Together, these objects help bring to life the popular phenomenon of the American band during the 19th century in a way that will hopefully resonate with today’s viewers.”

Events associated with the exhibition include:
• Three performances by Saxton’s Cornet Band, a group that re-creates the sounds, appearance and conduct of brass bands during the antebellum and Civil War eras-a children’s concert Oct. 10 at 10 a.m. at the Performing Arts Center, an outdoor concert Oct. 10 at 1 p.m. in the museum’s Jane and Harry Willson Sculpture Garden, and a concert Oct. 11 at 3 p.m. at the Performing Arts Center.
• A gallery talk by Ralph Dudgeon, professor emeritus of music, State University of New York College at Cortland, and the leading keyed bugle player in the U.S., Oct. 10 at 2 p.m.
• Concerts by student performers from the Hugh Hodgson School of Music on Oct. 14, Oct. 21 and Nov. 18 at noon.
• A tour led by Gillespie on Oct. 14 at 2 p.m.
• A screening of the film “The Music Man” on Oct. 15 at 7 p.m.
• A Make It an Evening event Oct. 22 at 5 p.m. with a gallery tour by Foreman.
• The museum’s quarterly reception, 90 Carlton: Autumn, on Oct. 23 at 6 p.m. ($5, free for members of the Friends of the Georgia Museum of Art).
• A Family Day Oct. 24 from 10 a.m. to noon, with an instrument petting zoo and a performance by students from the Hugh Hodgson School of Music.
• A tour led by Foreman on Dec. 9 at 2 p.m.