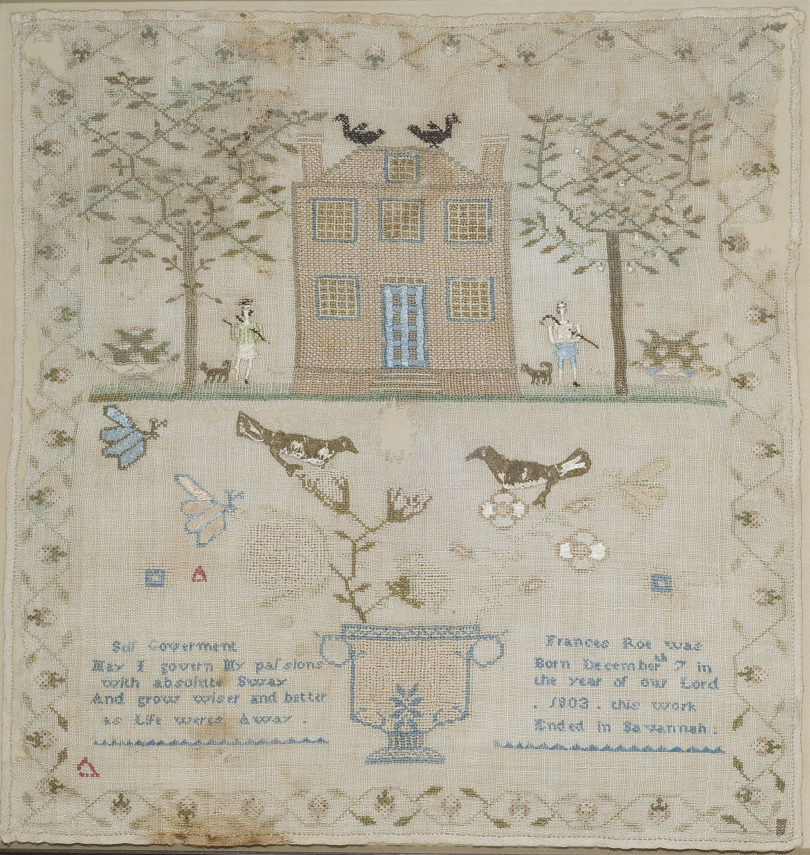 A sampler from around 1815 by Frances Roe of Savannah is part of the exhibition.

Athens, Ga. – The Georgia Museum of Art at the University of Georgia will present the exhibition “Georgia’s Girlhood Embroidery: ‘Crowned with Glory and Immortality'” Oct. 31 through Feb. 28, 2016.

Organized by curators Kathleen Staples, independent scholar, and Dale Couch, curator of decorative arts at the museum, it focuses on ornamental needlework created in Georgia and is the first comprehensive exhibition of Georgia samplers.

Girls between the ages of 8 and 12 created embroidered samplers during the 18th and 19th centuries in Georgia as an exercise to gain skills in sewing, needlework and embroidery. Wealthier girls were expected to possess such skills as part of their participation in polite society. Girls from humbler backgrounds and free African-Americans could use their skills to find paid employment. The samplers include rows of alphabets, quotations in prose and verse, images of architecture and embellished floral borders. Written documents from the period show that needlework took part in many settings: public and private, elective and required, urban and rural.

“The Henry D. Green Center for the Study of the Decorative Arts, at the Georgia Museum of Art, is keen to examine and present the art of all groups of people who were present in Georgia’s history,” Couch said. “My predecessor Ashley Callahan and I searched for embroidery examples that represented the work of Georgia’s women for more than a decade. With the help of textile specialist Kathy Staples, we have been able to decipher the needlework done by elite women in early Georgia. These women were literate and educated, which provided them with the means of creating such ornamental needlework. In spite of the elite nature of embroidery, Staples has touched on many important tangents of Georgia experience, including African-American sewing and girlhood education.”

The exhibition includes about two dozen samplers created in Georgia or by Georgians between the mid-18th century and about 1860, on loan from public and private collections, including those of the Museum of Early Southern Decorative Arts, the Midway Museum, the Charleston Museum, the Telfair Museums, St. Vincent’s Academy (Savannah) and the President James K. Polk Home and Museum. It will be accompanied by a fully illustrated catalog published by the museum and for sale through the Museum Shop.

One example, worked by Martha “Patsey” Bonner McKenzie (1775-1851), was used as evidence by its maker to claim a Revolutionary War widow’s pension. Another, by Eliza S. Blunt, consisted of architectural embroideries, which were very uncommon in Georgia at the time. Blunt’s needlework probably shows the Eatonton Academy, built around 1807.

Associated museum events include a public tour Nov. 11 at 2 p.m.; a Family Day focusing on embroidered holiday ornaments Dec. 5 at 10 a.m.; and the eighth biennial Henry D. Green Symposium of the Decorative Arts, organized by the museum and held at the UGA Hotel and Conference Center Feb. 2-4. The museum will also host and co-organize this year’s MESDA Textile Seminar, “Interwoven Georgia: Three Centuries of Textile Traditions,” to be held Jan.14-16.

The exhibition is sponsored by the National Endowment for the Arts, the W. Newton Morris Charitable Foundation and the Friends of the Georgia Museum of Art.