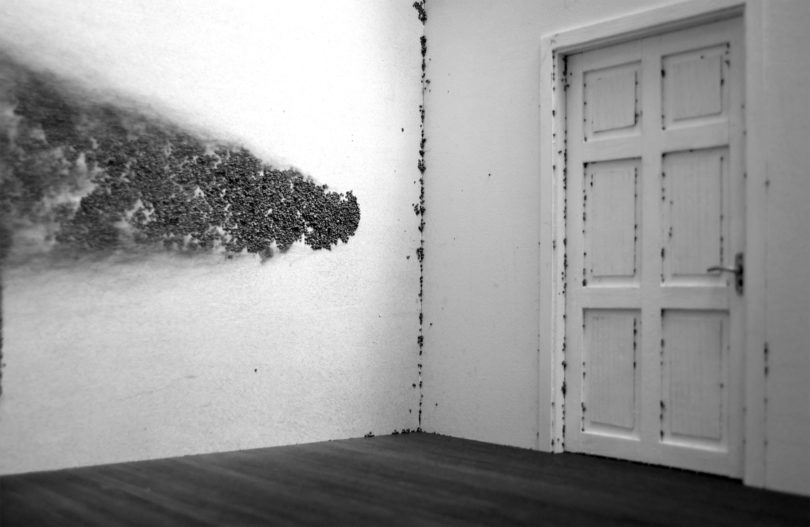 Flock is a short film by Bernd Oppl that is part of the exhibition "Bernd Oppl: Inhabited Interiors" on view June 21 to Sept. 16 at the Georgia Museum of Art.

Athens, Ga. – The Georgia Museum of Art at the University of Georgia will feature the exhibition “Bernd Oppl: Inhabited Interiors” June 21 to Sept. 16 in the Alonzo and Vallye Dudley Gallery, which focuses on new-media art.

The exhibition was organized by Laura Valeri, associate curator of European art. It consists of three short films inspired by the work of Alfred Hitchcock and horror film aesthetics: “Hotel Room,” “Flock” and “Sick Building.” Oppl builds miniature architectural models, then introduces an unpredictable element into the scene and films the result, often rotating the model to produce visual effects. For example, “Flock” features a home inhabited by a strange, dark dust cloud, while in “Sick Building” a gelatinous substance drips from floor to ceiling.

“Oppl’s painstaking process is especially interesting to me,” Valeri said. “He spends a lot of time watching films to ‘collect samples’ to synthesize into one model, which he sketches on a computer. Then, he searches for the perfect material to invade the space-in the case of ‘Flock,’ poppy seeds-and finally builds and mechanizes the model. In the final product, the model looks like a life-size interior, and the poppy seeds look like dust or a shadow.”

By having the moving images seem to defy the laws of physics, Oppl attempts to make the viewer question reality and captivate his or her attention.

“In the end, the video camera is the middle man, and it completely changes our perception. Oppl calls it ‘the displacement of the eye by camera,'” Valeri said.

The films themselves range from 4-7 minutes long. Oppl’s art has appeared in film festivals all over the world, including in Croatia and the Netherlands.

Museum Information
Partial support for the exhibitions and programs at the Georgia Museum of Art is provided by the Georgia Council for the Arts through appropriations of the Georgia General Assembly. The council is a partner agency of the National Endowment for the Arts. Individuals, foundations and corporations provided additional museum support through their gifts to the University of Georgia Foundation. The Georgia Museum of Art is located in the Performing and Visual Arts Complex on the East Campus of the University of Georgia. The address is 90 Carlton St., University of Georgia, Athens, GA 30602-6719. For more information, including hours, see http://georgiamuseum.org or call 706-542-4662.