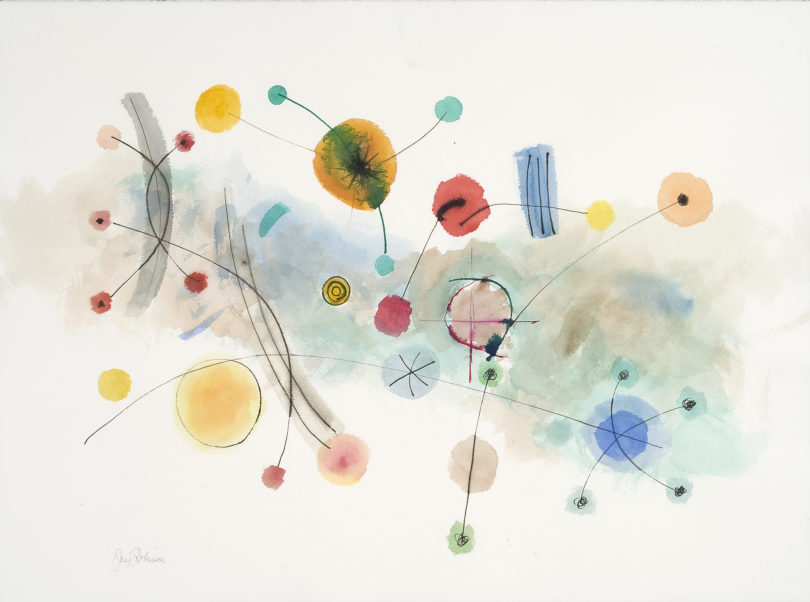 The Georgia Museum of Art at the University of Georgia will present the exhibition "Jay Robinson: Quarks

Athens, Ga. – The Georgia Museum of Art at the University of Georgia will present the exhibition “Jay Robinson: Quarks, Leptons and Peanuts” from March 28 through June 21. The exhibition will feature the work Robinson has created since a fire destroyed his home and studio in the mid-1990s and is organized by William U. Eiland, director of the museum, and Todd Rivers, head preparator.

After the fire, Robinson’s work moved in a different direction and he reinvented himself as an artist, taking inspiration from science. He started studying molecular physics and constellations, moving toward abstraction from a previously realistic approach. Despite the fact that he will turn 100 this year, he continues to create work, painting in the burned studio that he later rebuilt. One painting, an untitled African scene, survived the fire and will be shown in the exhibition.

The Detroit-born artist earned a bachelor’s degree from Yale University in 1937 and later attended Cranbrook Academy of Art, one of the few institutions dedicated to design. There, he studied under Zoltan Sepeshy, Charles Eames and Harry Bertoia, all of whom had a strong influence on Robinson’s methods. In 1950, he traveled to Africa through the Louis Comfort Tiffany Foundation Fellowship; the American Academy of Arts and Letters and the National Institute of Arts and Letters purchased seven of his paintings of his travel documentations for presentations and institutions. His painting of Billie Holiday singing, based on a drawing he made of her from life, is in the museum’s collection but has been out on loan in the traveling exhibition “The Visual Blues: The Harlem Renaissance.”

“This exhibition celebrates a long life devoted to art and things of the spirit,” Eiland said. “The works on view literally ‘rose from the ashes’ of a terrible studio fire, a time when the artist changed direction and rediscovered his muse. We are fortunate, indeed that he never despaired of art’s power to restore and to provoke, in short, to complete life.”

This is the second exhibition of Robinson’s work at the museum. In 2006, “Jay Robinson” featured 31 works including sculptures, egg tempera paintings, drawings, oil paintings and mixed-media creations from the 1940s to the 1980s.