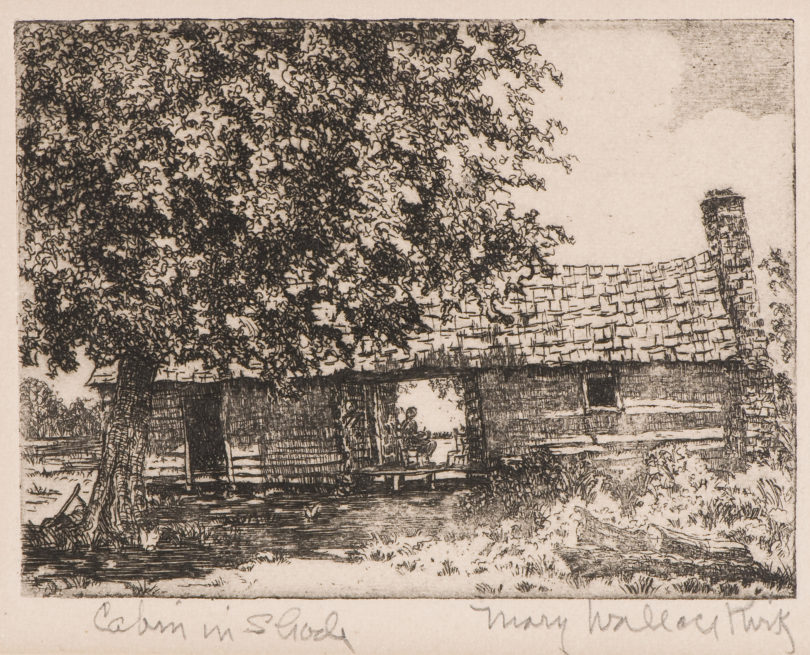 Mary Wallace Kirk's "Cabin in Shade" is an etching on paper. It will be displayed July 19-Oct. 12 at the Georgia Museum of Art.

Athens, Ga. – The Georgia Museum of Art at the University of Georgia will bring to light the works of a virtually unknown female artist in its exhibition “The Prints of Mary Wallace Kirk,” on display July 19-Oct. 12. Independent scholar Stephen J. Goldfarb, who researched Kirk’s life and work extensively, served as curator.

Kirk, who was born and lived most of her life in Tuscumbia, Alabama, produced finely detailed renderings of the countryside for about a decade, between the 1930s and 1940s. She is known for her reliably sun-filled works. The exhibition features approximately 30 of her works, including watercolors, etched plates and drawings as well as printed etchings.

Kirk studied etching with Harry Sternberg at the Art Students League in New York. She was influenced by the etching revival that made its way to the U.S. in the early 20th century as well as by the American Scene movement, a period after World War I when Americans moved away from European influences. Artists focused on their own country and regions for subject matter, and Kirk took the South as her topic.

“Cabins, especially log cabins, are rapidly disappearing from the Southern landscape,” Kirk wrote. “Before these relics of an older day completely pass from the scene it seems fitting to make a pictorial record of them, and to try to capture some of the lowly charm that surrounded them.”

By the 1950s, Kirk focused on her duties as a trustee of her alma mater Agnes Scott College, in Decatur, Georgia and on two memoirs illustrated with reproductions of her prints.

“This exhibition, like many before it at the museum, highlights the work of a lesser-known southern printmaker, which has not been shown since her death,” said Hillary Brown, director of communications at the Georgia Museum of Art. “As an academic museum, fostering research is one of our most important missions, and Dr. Goldfarb’s efforts in tracking down information on Kirk have been formidable. In addition, visitors will be able to see the delicacy of her line in these tiny etchings.”

The exhibition is accompanied by an issue of the Georgia Museum of Art Bulletin that includes images of Kirk’s etchings and an essay on her life and career written by Goldfarb. The Bulletin is an intermittently published venue for scholarship and research on the museum’s collection.

Associated events include a gallery talk on Aug. 14 at 5:30 p.m., by the museum’s director, William Underwood Eiland, who is serving as in-house curator of the exhibition, and the museum’s quarterly reception, 90 Carlton: Fall, on Oct. 10.