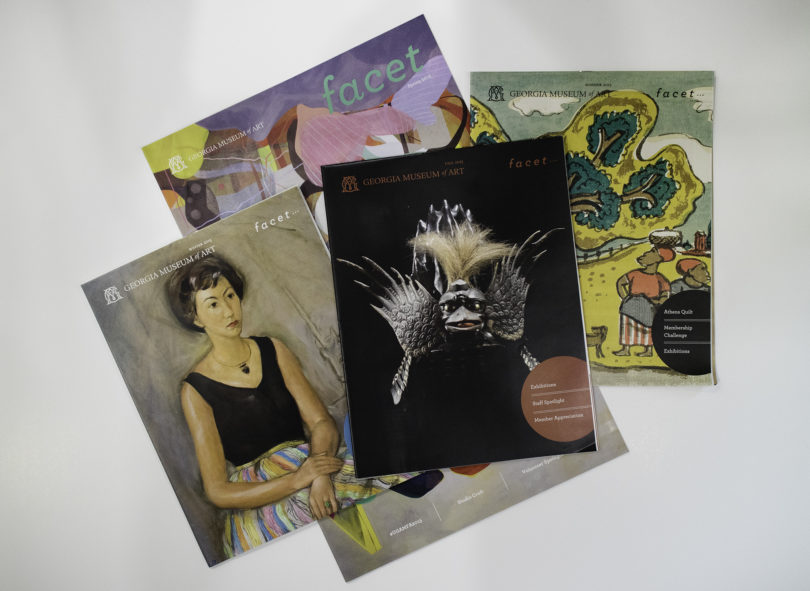 Athens, Ga. – Since late July, the Georgia Museum of Art at the University of Georgia has received five national and regional awards for its exhibitions and publications.

The museum’s quarterly newsletter, Facet, garnered a second-place award in the American Alliance of Museums’ annual publication design competition, the only national juried competition of its kind. Judges including graphic designers, museum professionals, and/or publishers choose winners for their overall design excellence, creativity and ability to express an institution’s personality, mission or special features. Facet is designed by The Adsmith, a firm in Athens run by graduates of UGA’s Lamar Dodd School of Art.

Facet also received a first-place award for design in the Southeastern Museums Conference’s publications design competition, presented during SEMC’s annual meeting in October. Facet has won a total of seven regional and national design awards since 2012.

SEMC also presents awards for exhibitions, and the museum received two of those: a silver award for “El Taller de Gráfica Popular: Vida y Arte” and a bronze for “Georgia’s Girlhood Embroidery: ‘Crowned with Glory and Immortality.'” The museum organized both exhibitions in 2015.

Most recently, “El Taller de Gráfica Popular: Vida y Arte” received the Southeastern College Art Conference’s 2016 Award for Outstanding Exhibition and Catalogue of Historical Materials, presented Oct. 20 during the organization’s annual meeting. This award is designed to recognize an exhibition of historical materials, which by its design, installation and/or catalogue is considered exemplary.

The SECAC awards committee described this work as “a massive, exhaustive and stunning catalogue (and exhibition) that chronicles the Mexican printmaking collective el Taller de Gráfica Popular.” It added that “this project eloquently argues for the power of the collective artistic voice speaking out against injustice and hatred.” Finally, it noted that the museum should be commended for this effort to “make great inroads into the Hispanic and Latino communities in the Athens area.”

The American Alliance of Museums represents more than 30,000 individual museum professionals and volunteers, institutions and corporate partners serving the museum field. It helps develop standards and best practices, gathers and shares knowledge and provides advocacy on issues of concern to the entire museum community.

The Southeastern College Art Conference is a national nonprofit organization devoted to education and research in the visual arts. Founded in 1942, SECAC provides advocacy and support for arts professionals and engenders opportunities for the exchange of scholarship and creative activities through an annual conference and publications. Though founded initially as an organization of artists, scholars and arts professionals from the Southeastern states, SECAC has grown to include individual and institutional members from across the U.S. and around the world, becoming the second largest national organization of its kind.