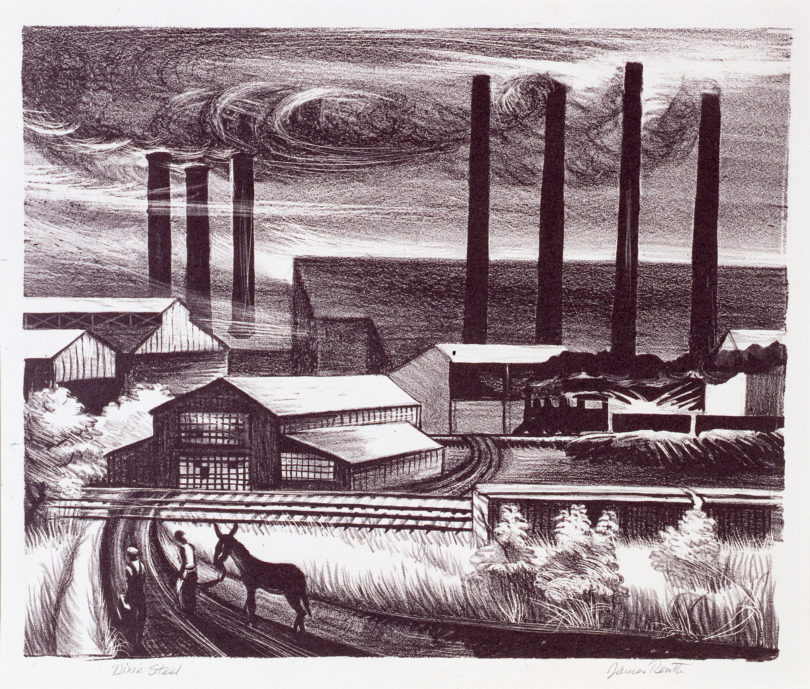 Athens, Ga. – The Georgia Museum of Art at the University of Georgia will exhibit more than 30 graphic works by James E. Routh Jr. from Aug. 25-Oct. 21. The exhibition, organized by GMOA and originally on view at the Robert C. Williams Paper Museum in Atlanta, will feature prints and paintings Routh created while traveling throughout the South during the Great Depression.

Organized by Laura Valeri, associate curator of European art at GMOA, the show will feature scenes depicting rural Georgia dominated by the cotton industry. Reflecting Routh’s feelings on the degradation of the landscape, his works on paper focus on the damaged and eroded land resulting from years of over-cultivation as well as the impoverished state of the South.

“Routh’s depiction of the state of the land shows it as it was in the 1930s and 1940s,” said Valeri. “It causes the viewer to think about the decades of abuse toward the land that led up to its appearance as Routh recorded it.”

Routh was born in New Orleans in 1918 and grew up in Atlanta, where he studied at Oglethorpe College, now Oglethorpe University, for two years before enrolling in the Art Students League in New York City to study painting, printmaking and lithography.

After he was endowed with a yearlong Rosenwald fellowship in 1940, Routh traveled throughout Georgia and the South for 16 months creating ink wash and watercolor works, which he describes as “…scenes of everyday life in the South.” Routh’s prints reflect the hardships endured by many southerners he saw during this trip.

The artist aligned himself firmly with Regionalism, an American art movement of the 1920s and 1930s that promoted the depiction of ordinary people and scenes of the rural U.S. Although its best-known practitioners, such as Thomas Hart Benton, John Steuart Curry and Grant Wood, were Midwesterners, the movement spread its influence beyond the plains states to the rest of the country.

Routh’s prints do not directly address poverty, but the struggles of the South are apparent in the poor condition of houses and farms in the background of many of his prints. Other prints in the show depict factories invading the rural landscape, emitting black clouds of smoke as workers approach, dwarfed by the smokestacks.

According to Valeri, Routh’s depictions may prompt viewers to think about present-day Atlanta or other areas around them that continue to develop, as some existing locations in Routh’s then-rural scenes are now within metro Atlanta. Routh’s prints also capture agricultural scenes that have been lost in the urbanization of Atlanta and its suburbs.

“Routh shows a snapshot of the land at a particular moment, but it is living history,” said Valeri.

After fighting in World War II with the U.S. Army and following a career in advertising, Routh retired in 1983 to Waynesville, N.C.

The W. Newton Morris Charitable Foundation and the Friends of the Georgia Museum of Art will sponsor this exhibition.