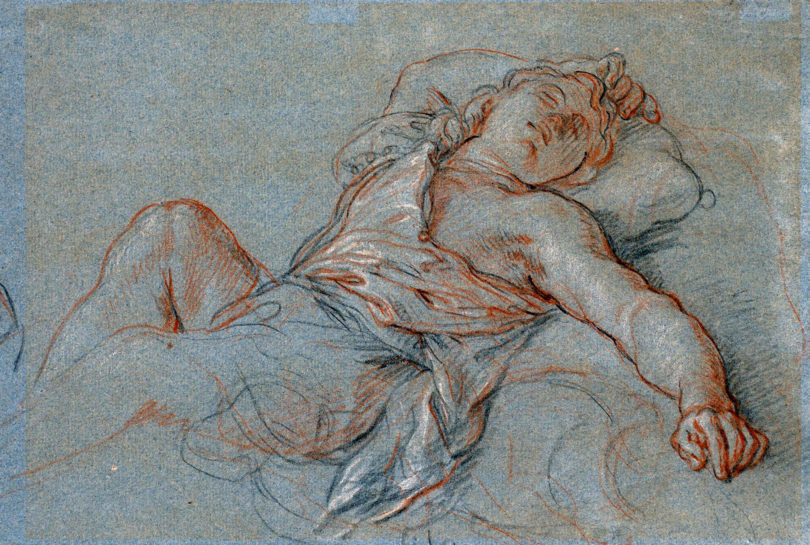 “Each of these drawings is exquisite in its own right, and as a collection, they offer a compelling overview of the French Academy,” said Lynn Boland, GMOA’s Pierre Daura Curator of European Art and the in-house curator of the exhibition.

The drawings on display offer an opportunity to see a range of media, including chalk, colored chalks, ink and crayon; a variety of favored subjects, such as narrative compositions, portraits, landscapes and genre scenes; and types of drawings from figure and drapery studies to quick sketches of initial ideas to complex, multifigured, highly developed compositional works. From the grand “machines” that narrate epic history, such as Michael Dorigny’s “Sacrifice to Juno” or Anne-Louis Girodet de Roussy-Trioson’s “Christ Led from Pilate,” to the celebrations of singular, intimate moments, such as Watteau’s seated figure or Honoré Daumier’s observation of a woman putting bread in an oven, “The Epic and the Intimate” demonstrates a range of both subject and medium. Later artists, including Pierre-Paul Prud’hon, Théodore Rousseau and Edgar Degas signal the transition into the modern era that glorified the individual and the local.

Snay said, “Before drawing gained its autonomy from painting, sculpture and architecture in the 20th century, it was regarded as a means of ordering reality. It was understood to be the fundamental basis of all creative activity.”

Many of the artists whose works appear in the exhibition belonged to the Académie royale de peinture et de sculpture (Royal Academy of Painting and Sculpture) in Paris, founded by the French government in 1648. Snay said, “By holding government-sponsored exhibitions and commissioning large-scale projects, the Royal Academy monopolized the art market and became a model for many other academies in Europe and North America, ensuring France’s influence on material culture into the early 1900s.”

Museum Information
Partial support for the exhibitions and programs at the Georgia Museum of Art is provided by the Georgia Council for the Arts through appropriations of the Georgia General Assembly. The council is a partner agency of the National Endowment for the Arts. Individuals, foundations and corporations provide additional museum support through their gifts to the University of Georgia Foundation. The Georgia Museum of Art is located in the Performing and Visual Arts Complex on the East Campus of the University of Georgia. The address is 90 Carlton Street, Athens, Ga. 30602-6719. For more information, including hours, see www.georgiamuseum.org or call 706/542-GMOA (4662).