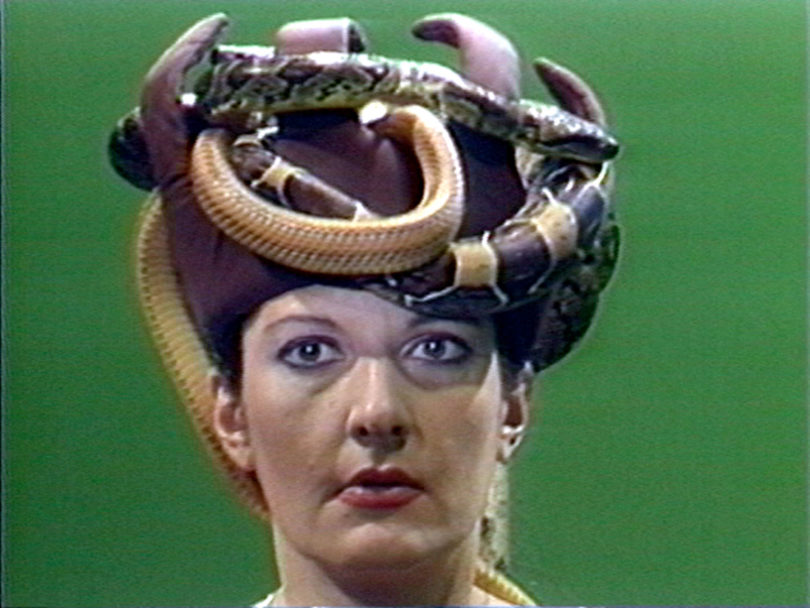 Athens, Ga. – As part of Women’s History Month, the Georgia Museum of Art at the University of Georgia is screening “Performing Identity: Marina Abramovic, Eleanor Antin and Hannah Wilke” in the Alonzo and Vallye Dudley Gallery, which is devoted to new media. These videos, showcasing performances dealing with issues of identity by three seminal artists of the 1970s and 1980s, will be shown through June 10.

As pioneers of feminist performance art, Abramovic, Antin and Wilke investigate the constructed identity and traditional roles that females play in society.

Lynn Boland, the museum’s Pierre Daura Curator of European Art and the curator of this exhibition, said, “Each of these works deals with issues of identity, especially in relation to women in the arts. They do so in very different ways, but there is a common thread of humor. This isn’t an exhibition I’ll show my kid, but these three works should provoke thoughtful discussion among mature audiences.”

The product of a military family, Abramovic suffered through years of tight parental control and strict regulations. After moving to Amsterdam in 1976, she met the artist Uwe Laysiepen, known as Ulay, with whom she would collaborate for a decade. Their work focused on the idea of artistic and personal identity. In her film “SSS,” she delivers a monologue that traces a concise personal chronology. This brief history, which references her past in the former Yugoslavia, her performance work and her work with and separation from Ulay, is intercut with images of Abramovic engaged in symbolic gestures and ritual acts, invoking the personal and the mythological in an affirmation of self.

Born in the Bronx, N.Y., Antin adopts fictional identities in much of her work. In “From the Archive of Modern Art,” she assumed the role of Eleanor Antinova, a retired African-American ballerina. Throughout October 1980, Antin “darkened” herself and “passed” in her daily life as the once celebrated ballerina of Sergei Diaghilev’s Ballet Russe. This fictional work presents Antinova’s “lost years.”

The W. Newton Morris Charitable Foundation and the Friends of the Georgia Museum of Art are sponsors of the exhibition.