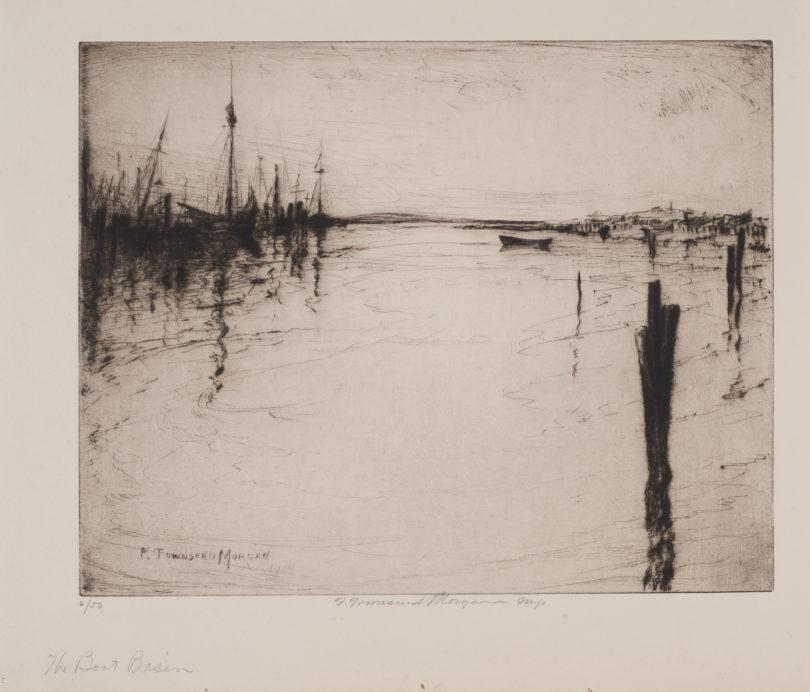 Athens, Ga. – Printmaker F. Townsend Morgan is by no means a household name. Even many art historians of the era in which he worked have never heard of him, and he never worked or lived in Georgia. So why is the Georgia Museum of Art at the University of Georgia organizing the first exhibition of Morgan’s work since his death in 1965?

Guest curator and independent scholar Stephen Goldfarb studies prints from the years between World War I and II, which is when Morgan mostly worked. Morgan’s prints of sailboats, in particular, caught Goldfarb’s eye. They reminded him of James McNeill Whistler’s images of similar subjects, rendered with minimal detail that nonetheless captures sky, sea, boat and land. Indeed, Morgan studied with artist Joseph Pennell in Philadelphia, who knew Whistler and served as his first biographer. Although Morgan’s work was not well known, its quality was high.

A retired librarian who has served as guest curator of several previous shows at the museum, Goldfarb started researching Morgan’s life. He found descendants scattered around the U.S., including one granddaughter who had saved boxes and boxes of Morgan’s papers. Morgan had started off making art as a hobby while working in the family steel business, and when the Great Depression hit and caused that business to go bankrupt, he turned to his pastime to try to make a living, making hundreds of figurative prints.

“Avocation to Vocation: Prints by F. Townsend Morgan” will be on view at the museum from June 17 through Sept. 10. It includes about 30 of Morgan’s prints, a watercolor he made while in the U.S. Virgin Islands, several drawings, studies for prints and some ephemera. If anything, the fact that Morgan is almost unknown is the reason to present the exhibition, to correct the art historical record in a small way, said Goldfarb.

Morgan was born in 1883 and grew up in Brooklyn, New York. He studied art at the Pratt Institute in Brooklyn and the Art Students League in New York City, learning from artists Arthur Dow, George Bridgman and John F. Carlson. In Philadelphia, he was associated with the Sketch Club, the Print Club and the Pennsylvania Academy of the Fine Arts. When he and his family fell on hard times, he found work with various New Deal art programs, traveling to the Virgin Islands and Florida.

Morgan first found work with the Public Works Art Project in Philadelphia in 1933. Specifically established to get the unemployed through the winter of that year, it was the first of several federal government programs that employed out-of-work artists. One of his assignments was to make drawings of slum conditions in Philadelphia for first lady Eleanor Roosevelt to use in a talk. Two etchings resulted from these drawings, both of which are in the exhibition.

Through the Federal Relief Agency sponsored by Key West Art Project, Morgan journeyed to Key West, Florida, and began working on prints of the surrounding seascapes and coastal life. From 1936 to 1937, he worked for the Treasury Relief Art Project in the Virgin Islands, the smallest of the four New Deal art programs. He then returned to Key West and established its Community Art Center in 1941. In 1948, he became the artist-in-residence at St. John’s College in Annapolis, Maryland, a position he held until 1950. Along the way, he drew illustrations for a book on clouds and weather patterns, designed a stamp for the 300th anniversary of Annapolis and made postcards of popular Key West scenes to promote tourism on the island.

Morgan won prizes for his work, and his prints belong to the collections of the Library of Congress, the New York Public Library and the Treasury Department of the United States, as well as the Georgia Museum of Art. He seems to have managed to support himself and his family through his commissions and various federally funded gigs. Goldfarb says he hopes that this exhibition will draw attention to Morgan’s “considerable oeuvre” of prints and that they can become a small part of American art history.

Programs related to the exhibition of Morgan’s work include a film series focusing on Key West (“Reap the Wild Wind,” “Key Largo” and “Matinee”), starting June 22; 90 Carlton: Summer, the museum’s quarterly reception (free for members of the Friends of the Georgia Museum of Art, $5 non-members) on July 28 at 5:30 p.m.; and public tours on Aug. 23 at 2 p.m. and Sept. 10 at 3 p.m. All events are free and open to the public unless otherwise indicated.

Museum Information
Partial support for the exhibitions and programs at the Georgia Museum of Art is provided by the Georgia Council for the Arts through appropriations of the Georgia General Assembly. The council is a partner agency of the National Endowment for the Arts. Individuals, foundations and corporations provide additional museum support through their gift to the University of Georgia Foundation. The Georgia Museum of Art is located in the Performing and Visual Arts Complex on UGA’s East Campus. The address is 90 Carlton St., Athens, GA, 30602-1502. For more information, including hours, see georgiamuseum.org or call 706-542-4662