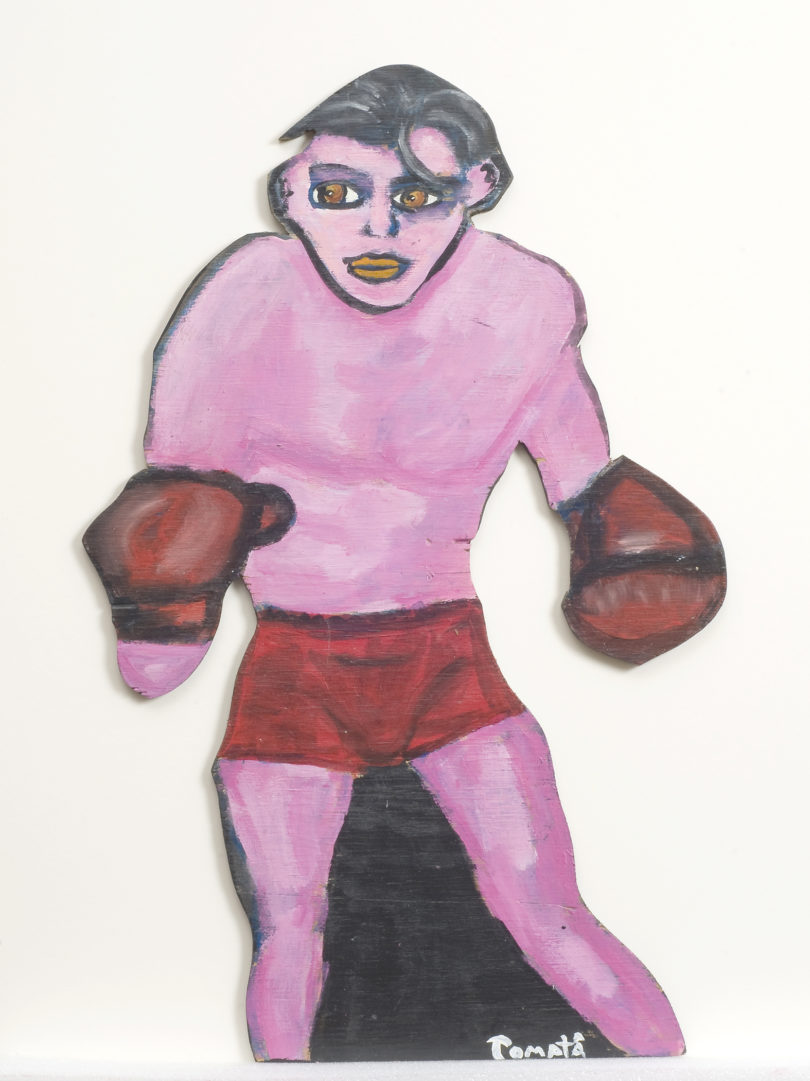 Tomata Du Plenty's painted cut-out of boxer Al Singer is part of the exhibition "Boxers and Backbeats: Tomata du Plenty and the West Coast Punk Scene" on display at the Georgia Museum of Art Oct. 4- Jan. 4.

Athens, Ga. – The Georgia Museum of Art at the University of Georgia will feature the exhibition “Boxers and Backbeats: Tomata du Plenty and the West Coast Punk Scene” Oct. 4- Jan. 4.

Organized by Lynn Boland, Pierre Daura Curator of European Art at the museum, “Boxers and Backbeats” features a series of portraits of boxers and musicians painted by David Xavier Harrigan, a.k.a., Tomata du Plenty (1948-2000), in the mid-1990s, as well as prints and zines from other artists including Gary Panter, Mark Vallen, Winston Smith and Raymond Pettibon to provide an authentic look at the influences of the early West Coast punk scene.

Gordon W. Bailey, a collector, donated a number of works by Du Plenty in honor of Michael Stipe, Peter Buck, Mike Mills and Bill Berry, the members of R.E.M., which provided the impetus for the exhibition.

Du Plenty helped build the Seattle punk scene in the early 1970s with the Ze Whiz Kidz counterculture drag theatre group. He then helped form the acclaimed L.A. synth-punk art band the Screamers. Du Plenty began painting in 1982 after finding an old set of paints and brushes in an alley behind Hollywood Boulevard. His lack of formal training gave him an outsider status in the art world that he embraced. He claimed he would rather sell 100 paintings for $25 each than one picture for $2,500.

Panter designed the Screamers logo, Vallen produced fanzines and album covers, Smith created designs for the Dead Kennedys of San Francisco and Raymond Pettibon designed the logo and other graphics for the L.A. groups Black Flag and the Minutemen.

“Du Plenty was truly a character and always true to himself,” Boland said. “The vibrancy of his life certainly comes through in his paintings. We’re especially grateful to Mr. Bailey for making this collection available to the public. More people should know about Tomata.”

Associated museum events include:
• A public tour with Boland on Oct. 8 at 2 p.m.
• 90 Carlton: Autumn on Oct. 10 (the event is $5, free for members).
• A music-themed Family Day on Oct. 11 as part of which children can make their own band poster.
• Teen Studio, a free quarterly program in which teenagers work with a local artist to create their own original works, on Nov. 6.
• A screening of the film “Population: 1,” a punk rock musical from 1986 starring Du Plenty, on Nov. 20 at 7 p.m.

Museum Information
Partial support for the exhibition and programs at the Georgia Museum of Art is provided by the Georgia Council for the Arts through the appropriations of the Georgia General Assembly. GCA also receives support from its partner agency-the National Endowment for the Arts. Individuals, foundations and corporations provide additional museum support through their gifts to the University of Georgia Foundation. The Georgia Museum of Art is located in the Performing and Visual Arts Complex on the East Campus of the University of Georgia. The address is 90 Carlton St., University of Georgia, Athens, Ga. 30602-6719. For more information, including hours, see http://www.georgiamuseum.org or call 706-542-4662.