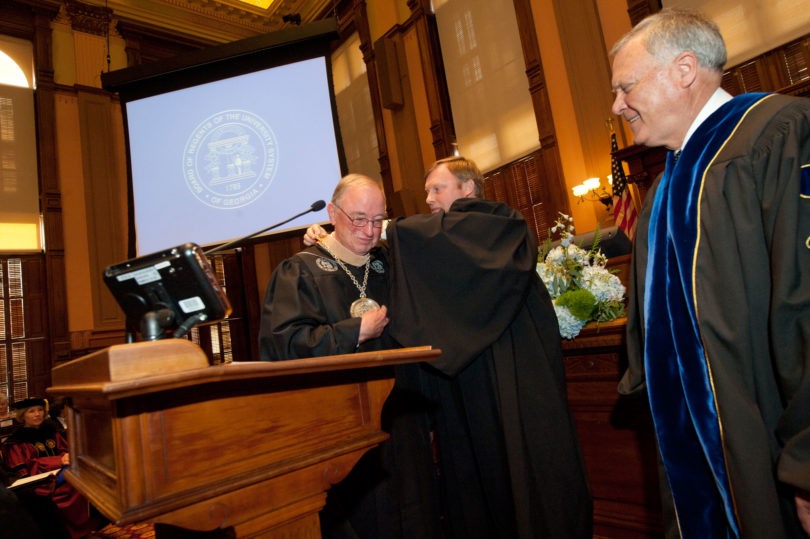 Henry “Hank” Huckaby was formally invested Nov. 9 as the University System of Georgia’s 12th chancellor, pledging to dignitaries and guests to help effect a transformation to a more highly educated Georgia and thanking them for the opportunity to lead the system.

“There is much to be proud of in the University System of Georgia,” Huckaby said. “Higher education today faces the challenge of becoming more than it has been in the past.”

To meet that challenge, he is focusing the system on three long-term strategies: performance, partnerships and value.

“The goal is not merely to have more. It is also to be more,” he said. “The university system will be the state’s most powerful economic asset.”

In his remarks, the chancellor noted that Georgia’s future economic success will be determined by how well the state does in both producing and being a magnet for intellectual capital.

“The places that are the hotbeds of discovery and innovation and have the educated workforce. . . will be the economic spikes that will flourish,” he said. “If Georgia is to become one of those 21st century spikes, it is the University System of Georgia that will be the state’s most powerful economic asset.”

Citing a number of studies that today’s students need to be learning more, Huckaby said that his role as chancellor is to ensure the university system is organized and focused in ways that can best prepare students.

Huckaby gave some highlights of where the system will target its efforts. In the area of performance, he pledged good stewardship of the system’s resources, both the use of physical space and the deployment of academic programs and employees.

Huckaby said that to meet the current challenges, partnerships are essential. He singled out efforts to strengthen partnerships with K-12 education, the Technical College System of Georgia as well as business and industry.

The third area of focus is that of increasing the value of higher education.

“We need to improve what we do, rather than simply growing the enterprise,” he said.

To that end, the focus on value means students’ ability to learn “critical thinking skills and problem-solving abilities they will need to succeed and thrive in the world of the 21st century.”

Preparing students for the workforce and as future citizens, parents, community volunteers and leaders is the essence of the value of higher education, according to Huckaby.

“If we prepare them well for all of these roles, then higher education will transform our citizens and our state and take us where we want to be,” he said.