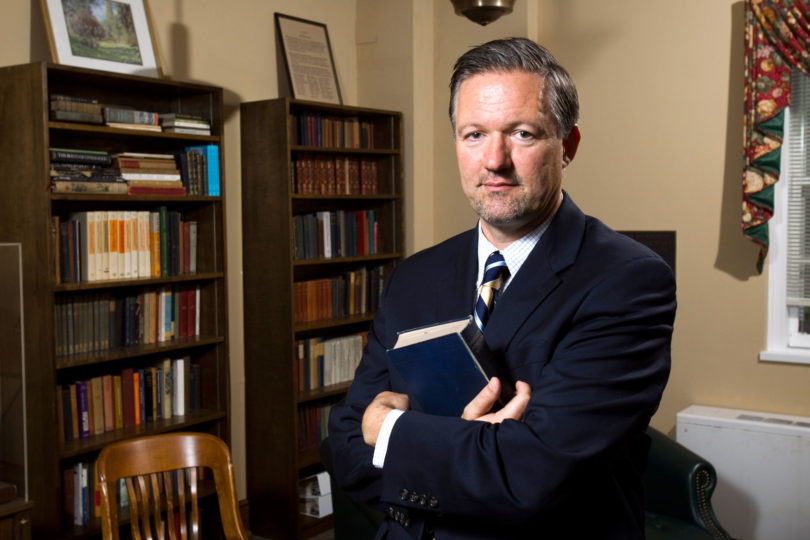 Since becoming director of the Willson Center

It’s hard not to see Nicholas Allen, the new director of the Willson Center for Humanities and Arts, as a symbol of the center’s goals.

Allen, who joined UGA in January, is from Ireland and has an international record of research leadership and publication in the U.S. and Europe. Allen is at once local and international. And that’s exactly how he sees the center’s mission.

“This university operates in a global context. World-class institutions recognize each other through their research centers because that’s the place where you really showcase the strength of your faculty,” he said. “That’s also where you encourage, nurture and support the new ideas that the faculty are creating through their teaching, publications and performances.”

As a 15-year co-sponsor of the Delta Prize for Global Understanding, the Willson Center has long encouraged international dialogue, something Allen plans to develop further.

“Before I came here, I was director of an institute for research at the National University of Ireland in Galway,” Allen said. “I also taught at UNC Chapel Hill, and I could see that Southern public universities had a great tradition of teaching humanities.

“UGA is a major institution that has all the pieces in place to have a first-rate research center,” he added. “There’s a wonderful faculty. We have a sense of history and tradition at the university, and Georgia has played a key part in the world for centuries.”

Allen has begun to restructure the Willson Center to better suit a broadened mission. He and his team also have worked to improve communications, built a new website with online application systems for the center’s grants and fostered networking with peer institutions. The center also has added two new associate academic directors: Steve Berry and Antje Ascheid.

Allen is also looking to build on private support, but his big ambition is to move the Willson Center to a new location more representative of the humanities and arts’ importance to the university and symbolic of the connections between town and campus.

One addition to the Willson Center’s outreach is the Global Georgia Initiative. Starting in the spring, the program will be a conduit between Athens and the larger world. The program will begin by hosting Ntone Edjabe, a South African writer, publisher and -musician; Barry Smith, director of the University of -London’s Institute of Philosophy; and Bertis Downs, manager of the rock band R.E.M.  The program also will feature John Wharton Lowe, UGA’s inaugural Methvin Distinguished Professor of Southern Literature, and James Cobb, Spalding Distinguished Professor of History.

The program aims to address global challenges in a local context. By addressing pressing contemporary questions such as the economy, society and the environment, Global Georgia will combine the best in contemporary thinking and practice in the arts and humanities with related advances in the sciences and other areas.

“We’re beginning to build the links and support that, in time, will give a much broader sense of our research and of how the humanities and arts contribute not only to the economy, but to the social and cultural ecology of our community as well,” Allen said. “There’s an amazingly rich humanities and arts tradition here. If you think about the hundreds of thousands of people who’ve been educated through the university in literature, art, theater, in all forms of creativity, you can see we excel in a lot more than science and football. I’d like to get that news out. We want to celebrate not just our past, but also plan for the future.”