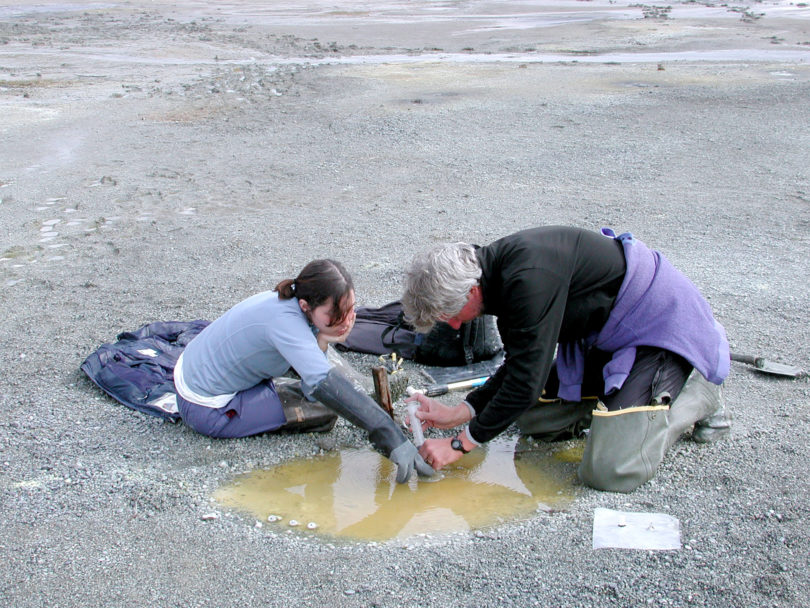 Undergraduate students get a taste of international field research in Russia, Turkey

Field research in distant lands was once the responsibility of faculty members but, more and more, UGA undergraduates are heading to locales formerly considered too distant or complex for undergraduates. Thanks to the ­Research Experiences for Undergraduates Program funded by the National Science Foundation, students have the chance to conduct field studies around the globe and become involved in genuine and significant research projects.

UGA senior Carri Ayne Jones couldn’t believe her eyes when, late last summer, the helicopter carrying her and several other UGA students and professors landed in the Uzon caldera. Known as “Russia’s Yellow­stone,” it’s an area of hot springs and other-worldly beauty on the Kamchatka peninsula in the Russian far east, north of Japan.

Shift around the globe to western Turkey to find the site where another UGA student, senior Mike Smilley, conducted mineralogy research last March for two amazing weeks. “It was really overwhelming,” he says, “and while I was there, the war was going on in Iraq.”

The research in Kamchatka is part of an international microbial and biogeochemical research program led by Juergen Wiegel, a UGA microbiologist. The study is part of NSF’s Microbial Observatories program, which is being conducted by professors and students from five universities. The other co­-investigators from UGA are Doug Crowe and Paul Schroeder, professors in the department of geology, and Chris Romanek, Andy Neal and Chuanlun Zhang, researchers at UGA’s Savannah River Ecology Laboratory. All will work part of the time with ambitious undergraduates.

“We are trying to discover how the specific geochemistry and geology influence microbial populations and what kind of microbes flourish there,” says Wiegel, “but more importantly how the presence of microorganisms is changing the geochemistry and mineralogy in these hot springs. The students will be involved in isolating and characterizing novel microorganisms and unusual minerals that form only by microbially mediated processes. Next year, we plan to split our time between the caldera and the Valley of the ­Geysers.”

“This trip was the experience of a lifetime,” says the still-awestruck Kevin Lee, a sophomore microbiology major from Atlanta. “Having the chance to meet professors from geology and microbiology and integrate the different scientific fields not only benefited me as a student but will continue to benefit the science community as a whole. The trip continues to enrich my education by making the work that I do in the lab more alive, more real. Growing bacteria is great fun, but knowing that you collected it makes the work that much more mind-blowing.”

Schroeder, who is a mineralogist and an expert in clays, especially kaolin, says the project in Turkey was an exceptional opportunity for an undergraduate like Smilley.

“We’re studying hydrothermal deposits in the area and how they came into being,” says Schroeder. “Performing isotope analyses of the clay minerals will provide important insights into the economic and environmental resources of a region that once witnessed the mythological war of Troy, which Homer immortalized in The Iliad.”

The research of students like Smilley, Lee and Jones will eventually be published in peer-reviewed scientific journals. The faculty scientists in these projects say that the experience will be a great start in applying for a job and for graduate school and will give the students a competitive edge.