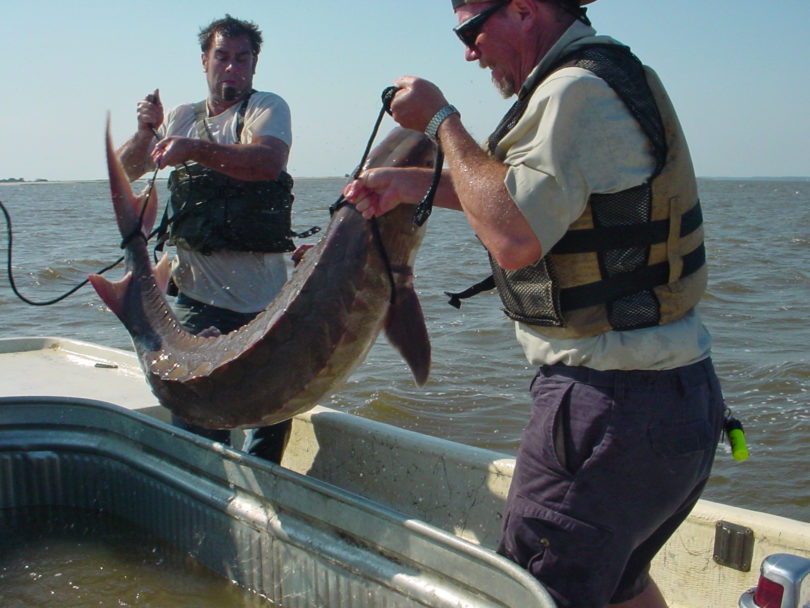 UGA researcher Doug Peterson will use a nearly $500,000 grant from the National Marine Fisheries Service in partnership with the Georgia Department of Natural Resources to determine how well Atlantic sturgeon are reproducing in Georgia rivers two years after the species was listed as endangered.

Biologists feared the fish’s populations had been lost from several of the state’s coastal waterways.

Populations of the ancient fish appear to be rebounding in some parts of the country, spurring discussion about whether the Atlantic sturgeon should be downlisted from endangered status, said Peterson, a fisheries professor in UGA’s Warnell School of Forestry and Natural Resources. However, there is no real evidence that the sturgeon is rebounding everywhere, particularly in the South Atlantic Distinct Population Segment, which includes Georgia.

Peterson is launching a three-year project to study the issue.

“Although we’ve seen a significant increase in juvenile abundance in the Altamaha River, we remain very concerned about populations in the St. Marys, Satilla and Ogeechee rivers,” Peterson said.

Peterson has shown in an unrelated project that the Atlantic sturgeon appears to be rebounding in Georgia. For the first time in decades, he documented sturgeon reproduction in the St. Marys River.

“We thought they were extinct there,” Peterson said, but earlier this year, while working on a new project for the U.S. Navy, his research team captured more than 10 young juveniles he believes were born in the St. Marys River.

“Because Atlantic sturgeon return to spawn only in the same river where they were born, this was a significant and exciting find,” Peterson said.

Atlantic sturgeon, targeted for their valuable caviar, were first protected from commercial fishing in 1996 after studies showed their numbers had declined dramatically, pushing them to the brink of extinction. The National Marine Fisheries Service listed them as an endangered species in 2012, but that decision has been controversial and unpopular, Peterson said, because of the strict rules in place that commercial fisheries must follow if one is accidentally caught in a net and because of the detailed management plans state agencies must enact to deal with situations involving the Atlantic sturgeon bycatch.

The imperiled fish are found along the East Coast as far as Canada, but only those populations south of Maine are considered endangered.

Peterson’s project will focus on the Ogeechee, Satilla and Altamaha rivers because these three Georgia waterways are considered the “barometer of recovery,” Peterson said.

The project has three primary objectives, the first of which is to find out how many sturgeon are being born in the Ogeechee and Satilla rivers. Populations in these two rivers have been particularly low, while those in the Altamaha River appear to have recovered.

Peterson also will compare the quality of juvenile nursery habitats in the Ogeechee and Satilla rivers to those of the Altamaha River.

The Altamaha River population has had a tremendous resurgence in recent years, growing from less than a thousand of these young juveniles in 2004 to nearly 7,000 in 2012. By comparing how the year-old sturgeon in the Ogeechee and Satilla rivers are doing with those in the Altamaha River, Peterson can determine if there is something about the nursery habitats in those other rivers that could be limiting recovery of their population.

Peterson plans to tag some of the year-old sturgeon he catches with acoustic “pingers” that will allow his team to track where they go, when they go there and for how long.

One of the most complex parts of the project involves DNA “fingerprinting” of the sturgeon. Peterson’s project plans to take samples from juvenile sturgeon before they leave their natal rivers to help correct these potential errors in the genetic database. Ultimately, Peterson said, the results of this project should help improve the quality of the genetic database for the species.

Peterson is working on the project with Isaac Wirgin, an associate professor in the Department of Environmental Medicine at the New York University School of Medicine. Peterson will receive $466,687 from the National Marine Fisheries Service for the study in partnership with the Georgia Department of Natural Resources and will subcontract to Wirgin for $87,744 to conduct the DNA analyses.