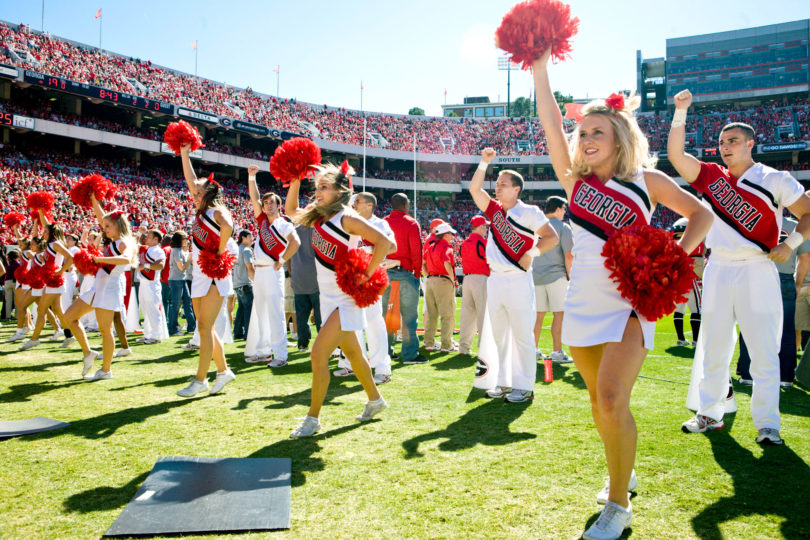 UGA cheerleaders will be out in full force to help rally Bulldog fans at this year's Homecoming game against Ole Miss.

UGA students, faculty, staff, alumni and fans will celebrate Homecoming Week with various events and activities that will culminate in the Nov. 3 football game against the University of Mississippi. The theme for this year’s celebration is “Go Big, Go Hard, Go Homecoming!”

Many of the campus activities are free to UGA students on the Athens campus with a valid ID. The general public is invited to participate; however, there may be a minimum associated fee. Among the scheduled activities are:

• Winning entries from the banner competition will hang in the Atrium of the Tate Student Center.

During the  annual street painting event, Sanford Drive will be painted by student organizations

• Spirit of Service events, co–sponsored by service ambassadors from the UGA Center for Leadership and Service, begin Oct. 29. Activities include a blood drive from 11 a.m.-5 p.m. in Reception Hall of the Tate Student Center. A two-day canned food drive also will be held. Food items collected will be donated to UGA’s Campus Kitchen. Students can participate in mini-service projects during Stop-n-Service, which runs through Oct. 31. During Coins for the Court, which also runs through Oct. 31, participants can donate coins in support of the charity chosen by members of the Homecoming court.

• During the Tate Plaza Extravaganza on Oct. 29 from 10 a.m.- 2 p.m., Homecoming Week will be celebrated with free pizza, funnel cakes and prize giveaways.

• During “Scream on the Green,” at 7:30 p.m. on Oct. 30 at Legion Field, moviegoers can watch the horror movie The Roommate on a huge, inflatable screen. Tickets for non-students are $5.

• On Oct. 31, a “Trick or Tweet” competition will be held from 11 a.m.-2 p.m. The University Union will Tweet campus locations and trivia questions; the first follower to reach the location and answer the question correctly will win a candy bag and two tickets to see comedian Mike Epps.

• Spirit of Service activities on Nov. 1 in Reception Hall of the Tate Student include a blood drive from 11 a.m.-5 p.m. During the “Day of Service” from 3-6 p.m., students will be connected with volunteer opportunities throughout the Athens community.

• “Bulldog Bite,” the Homecoming dinner in Bolton, Snelling, Oglethorpe and The Village Summit dining commons will be held Nov. 1 at 4 p.m. The meal is $15.25 for those not on the meal plan.

• Comedian Mike Epps will perform Nov. 1 at 8 p.m. in Grand Hall of the Tate Student Center. The stand-up comedian, actor, film producer and writer appeared in the films Next Friday, Friday After Next and The Hangover as well as on Def Comedy Jam. Tickets are $5 for students with valid UGACards who pay activity fees on the Athens campus; $10 for non-students; $15 day of show. Advance tickets are available at the Tate Student Center cashier’s window.

• On Nov. 2, the Homecoming parade will be held at 6 p.m. in downtown Athens. It will feature UGA athletes, student organizations, fraternities and sororities, the Redcoat Marching Band, UGA President Michael F. Adams and others. Reese Hoffa, Olympic medalist and UGA alumnus, will be the grand marshal. From 7-11 p.m., “Dawgs After Dark” will be held at Legion Field. The carnival will feature midway rides, games, free food and more. The event is $5 for non-students.

• Homecoming activities will culminate Nov. 3 with the football game against Ole Miss in Sanford Stadium and the crowning of the Homecoming king and queen at halftime. The game will be broadcast at 3:30 p.m. on CBS.

In addition to these events, the AGHON Honorary Society, the Student Alumni Council, the Grady College of Journalism and Mass Communication, the School of Law, the Terry College of Business and the Warnell School of Forestry and Natural Resources will hold Homecoming-related activities on Nov. 3 for their alumni.