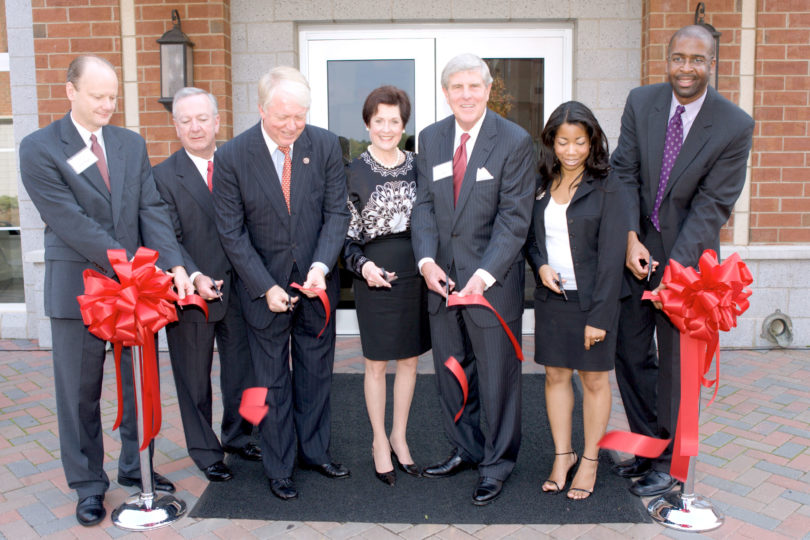 Residence hall named for Jack Rooker, one of university’s most loyal, supportive alumni

UGA honored one of its most loyal and supportive alumni Oct. 20 at a ceremony dedicating John W. Rooker Hall. One of four new residence halls that opened in 2004, the building is named for Jack Rooker, who has served as chairman of both the UGA Foundation and the UGA Real Estate Foundation and has pledged more than $2 million to the university’s $500 million capital campaign.

“Jack Rooker has been a good citizen of the University of Georgia in every sense of that phrase. He is one of those rare and wonderful individuals who don’t wait to be asked; he has offered to help over and over,” said UGA President Michael F. Adams. “He has set a high standard for volunteer service to his alma mater.”

That sense of civic responsibility was imparted by his father, the late William A. Rooker Sr., who, like his sons and grandson, was a UGA graduate.

“He led by example,” Rooker said. He taught us to give to our church, and he supported institutions like the Atlanta Arts Center and the University of Georgia.”

After graduating from UGA in 1960 with a degree in ­business, Rooker joined the Southern Bonded Warehouse operation his father had started in 1952. In 1958, Rooker Sr. added a real estate and investment company. Over time the new company has evolved into a highly successful construction business that creates warehouses and large distribution centers for companies like Home Depot, Haverty’s and Keebler.

Rooker now serves as CEO/chairman of Tucker-based John W. Rooker and Associates, and his support of UGA-which totals more than $2 million-is evidence that he learned his father’s lessons well.

Rooker’s initial pledge of $400,000 was designated for the Real Estate Foundation, the Terry College of Business and the UGA Alumni Association.

“I fulfilled that pledge-and then I doubled it,” said Rooker, who gave $300,000 in startup money to REF, which has revamped the way UGA finances ambitious construction projects such as the new East Campus Village residence halls by issuing tax-exempt revenue bonds.

Rooker gave $250,000 to the Terry College, where he honed what his father had already taught him about the business world. He gave another $250,000 to help finance a new alumni center that is slated to be built next to the Tate Student Center. He also lent his support to UGA’s new golf facility.

In gratitude for his years of leadership and support, UGA has named one of the residence halls in the East Campus Village in honor of Rooker. In addition, the building’s student commons room has been dedicated as the Cynthia W. (Cindy) Rooker Fireside Lounge in honor of Cindy Rooker, Jack’s wife, who earned a degree in early childhood education from UGA in 1962.

“President Adams should certainly be given credit for his vision in creating the UGA Real Estate Foundation,” Rooker said. “He has carried the torch for higher education in the state of Georgia through the university.”

Outfitted with a stone fireplace, a 50-inch plasma TV and a huge projector screen that drops down from the ceiling, the Fireside Lounge, within Rooker Hall, accommodates everything from studying to tailgating.