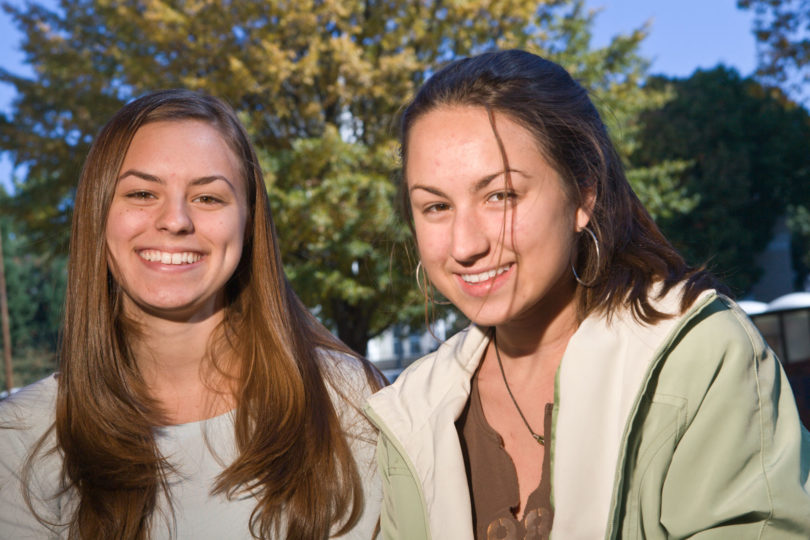 Sisters Ashley (left) and Jessica Bolfik (right) have slept in cardboard boxes and donated countless hours to the campus chapter of Habitat for Humanity.

Undergraduates Ashley and Jessica Bolfik of Savannah know what it’s like to spend the night on the street with only a cardboard box for shelter, and both would do it again if it meant they could save someone else from having to do the same.

Together, the sisters have spent a total of eight years volunteering for Habitat for Humanity, and have been involved with activities like sleeping in cardboard boxes in front of the Tate Student Center as part of the organization.

They first joined the organization at Tupelo High School in Tupelo, Miss.; Jessica volunteered for two years, Ashley for one.

“When I started, it was just another good thing to do,” Jessica said.

Now, Jessica, a junior majoring in graphic design, is in her third year volunteering for the UGA chapter, and Ashley, a sophomore majoring in elementary education, is in her second year.

Throughout the year, UGA’s Habitat for Humanity chapter hosts a series of fundraisers that raise money for the group’s ultimate goal.

“We try to raise enough money in a year to fund one house,” said Jessica, who estimated that building a house costs about $60,000. The organization usually meets this goal,  Jessica said, and is currently sponsoring its ninth house.

Habitat uses volunteer workers, donated materials and money to fund construction of  the houses. Proceeds that the UGA chapter raises are given to the Athens chapter.
Recipients of a Habitat house pay for it through monthly mortgage payments and 500 “sweat equity” hours, which are spent helping build their house and houses for others.

Jessica, who helped build one house, saw firsthand the difference it made in one woman’s life. “She was really appreciative,” Jessica said. “It makes you feel good. But also, you realize that you could be that person.”

Another event, Habifest, educates others on the seriousness of poverty in Athens. “We usually sleep in cardboard boxes in front of the Tate Center,” said Jessica.
“So many people, I think, on campus don’t realize how bad the poverty is in Athens,” Jessica said. “Habifest is a whole week of just trying to make people aware of what’s going on.”

After seeing this poverty firsthand, volunteering with Habitat is very important to both sisters.