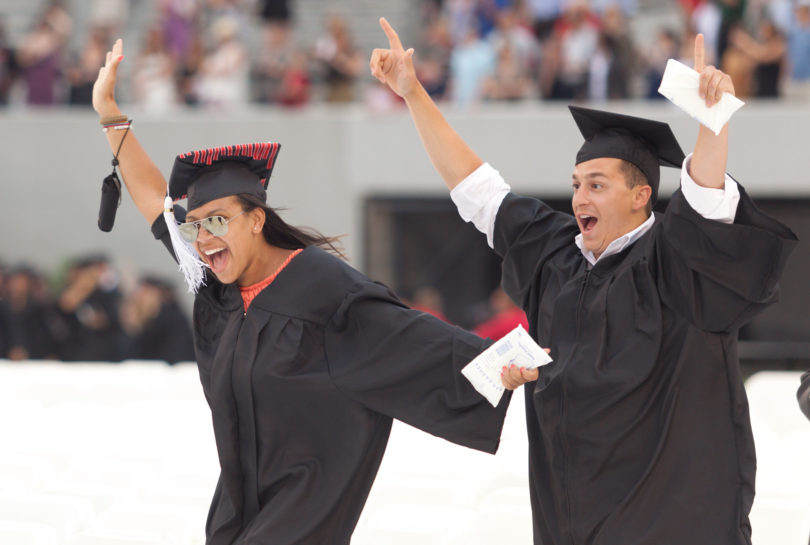 Commencement speakers urge Class of 2011 to get involved, excel at goals

In speeches at separate events May 13, U.S. Secretary of the Navy Ray Mabus and Karen Holbrook, a senior vice president at the University of South Florida, told audiences to plan carefully for their futures and those of others.

“Do something in your life that will last,” Mabus told the nearly 4,000-member undergraduate class. “It doesn’t have to be the Marine Corps, but maybe it could be the Peace Corps. You don’t have to run for office, but vote. Don’t let the issues of your day pass you by. Get involved with them, be passionate about them. Get involved with your school, your community, your state, your country. The world needs your head, your hands, your heart and your help. I hope in the end that you will do something that you won’t see the results of the next day or maybe ever.

“You are the grandchildren and great-grandchildren of the Greatest Generation, and your generation has exactly the same potential to change America and the world as that generation did,” said the former governor of Mississippi. “But what you do and whether your legacy will be held up 50, 60, 70 years from now is up to you today. Because one thing is certain as you head into a very uncertain world: There is no end of things that need doing. Many in your generation have already made their choice by wearing the uniform of this country. The question I’ve got for you is how are you going to join them?

“You [do not] have to join the military to do good, even though we need skilled and dedicated people defending this country. There are other very quiet acts of heroism that go on day after day,” Mabus added. “It’s the teacher staying after school with a student who’s struggling. It’s the nurse staying on after the shift is long over with a patient. It’s a neighbor mowing the yard of an elderly friend without being asked. It’s a farmer from Mississippi anonymously putting people through college without telling anyone, including his own family.”

Mabus urged students to follow those examples by serving others without seeking recognition.

At the graduate ceremony, Holbrook warned students to resist resting on their laurels.

“By all accounts, you are successful. The completion of your graduate degree may be your first big success,” she said. “Success is achievement, accomplishment and victory. It’s finishing what you set out to do. It takes effort and it means overcoming failures. Some would assert that success can be measured by the mistakes you’ve made, the obstacles you’ve overcome, as each of these teaches something and paves the way toward a new and better future even if it may not have seemed so at the time.”

Holbrook, who was UGA’s senior vice president for academic affairs and provost from 1998-2002 and president of Ohio State University for five years, told students that she fears success.

To her, being successful means being satisfied with a job well done. And any fulfilling and productive life’s work will never be done.

“Success usually comes to those who are too busy to be looking for it,” she said. “Besides, being successful is average. The goal is to excel.”