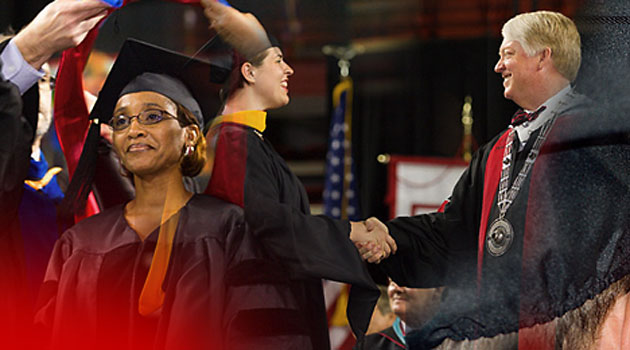 “The Graduate School’s centennial gives us an opportunity to recognize graduate education in its entirety,” said Maureen Grasso, dean of the Graduate School. “UGA graduate students, faculty members and alumni can come together across all disciplines.”

Grasso added, “While reflecting on the past achievements of UGA graduate students and educators, the centennial also allows us to look forward and see how we can continue to enhance UGA graduate education for future students.”

Although master’s degrees have been awarded by UGA since 1870, the formal recognition of graduate education at UGA ushered in a new era of student learning and teaching. Departments now had comparable benchmarks for students to reach before awarding a graduate degree.

Within three years of its founding, the Graduate School awarded the first master’s degrees to three students. A year later, Mary D. Lyndon became the first woman to receive a master’s degree. She went on to become the university’s first dean of women.

The initial graduate degrees UGA offered were Master of Arts, Master of Science, Civil Engineering and Master of Science in agriculture. Doctoral degrees were first offered in 1935, with Ph.D. degrees available to only chemistry, biological sciences and history students. From the limited number degrees available in the early years, today UGA offers master’s degrees in 118 fields and doctoral degrees in 79 disciplines.

In recognition of the past achievements, the Graduate School will host events throughout 2010 to celebrate 100 years of formal graduate education.

The centennial celebration formally begins Jan. 28 with speeches from Michael Adams, UGA president; Dean Grasso; and Debra Stewart, the president of the Council of Graduate Schools. Stewart will talk about the opportunities and challenges facing graduate education in the next decade and beyond.

Information about future centennial events can be found on the Graduate School Web site.

“We plan to celebrate all facets of graduate education, from the individuals who demonstrate the successes of the Graduate School to our surrounding community and state that allows us to flourish,” said Grasso.