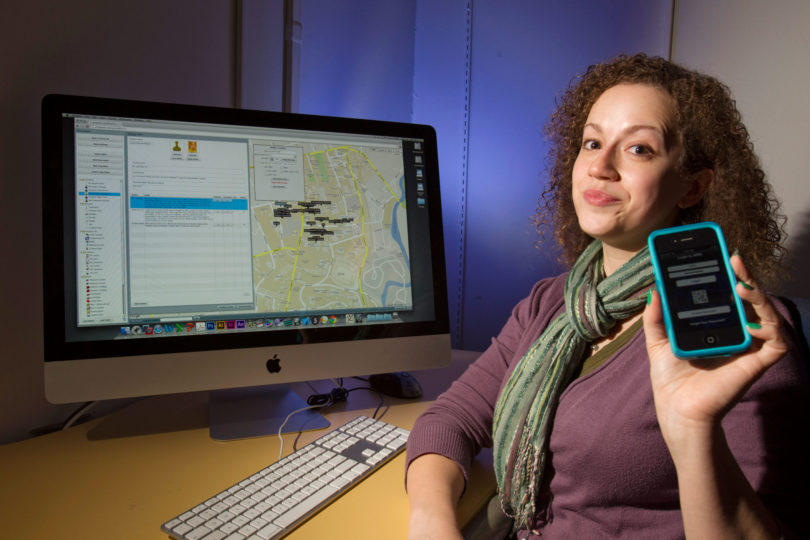 Millionaire Dr. Black has been murdered, and the person who can solve the mystery of his death is someone on campus—with an iPhone.

That’s the basis for an interactive game of Clue created by graduate student Caity Johnson, who is studying dramatic media. The game, which is played on an iPhone, originally began as a class project last fall for her locative media course, which focused on delivering multimedia and content directly to individuals on mobile devices.

“One of our assignments was to make a small, interactive project with the online software ARIS,” Johnson said. “It’s a very interesting piece of software where you get a map then you create your own characters, items and places. And then you drop them on the map to create a game.”

Chris Eaket, an assistant professor with joint appointments in the English department and the theatre and film studies department, said he chose to teach ARIS to his locative media students because it’s a “very flexible” platform. Eaket also said the program is more user friendly toward those lacking experience in coding software.

“You can do a lot with it,” Eaket said, “and there aren’t that many tools out there designed for artists and storytellers first and coders second, so that was also an appeal for the platform.”

Eaket said his goal for the assignment, as well as the locative media course, was to help students with “figuring out new ways to deliver creative experiences to people.”

Johnson decided she would use the assignment to put a new creative spin on one of her favorite childhood memories.

“I have always loved Clue because when I was a kid at our family game nights we would always play Clue and have a blast,” she said. “So when I first got this (assignment) I was like ‘That’s perfect!’ ”

Clue is a murder-mystery game in which players collect clues to determine who murdered the game’s victim. Johnson said she kept the basic premise of the game, but made minor changes.

“There were so many different versions of the game that basically I just picked a version and tried to stick to that,” she said. “I used the graphics from the character cards, but the story, places and objects were changed.”

Johnson also had to reduce the number of suspected killers from six to four, but she still wanted to make it interesting for repeat players.

“One thing that was really important to me is that there are different outcomes,” she said. “I wanted people to be able to go through it and say to each other ‘For me it was this one,’ or ask ‘What happened in your game?’ and make it interesting for them to revisit it.”

Eaket said he was really proud of how Johnson developed her game for a mobile phone, a process he said can be difficult.

“It’s not easy to create characters for mobile devices,” Eaket said. “With Clue you have it ready-made because you’ve got Col. Mustard, Professor Plum, etc., but with the narrative aspect, giving those characters personality, and having users go on well-motivated quests, I thought Caity really pulled it off well.”

The characters are spread out on campus, and players have to go “talk to them” by traveling to the location on the map ARIS displays.

“All the locations are outside,” Johnson said. “It starts at the Fine Arts Building and heads north, goes over toward the main library a bit, then to the field area by the special collections libraries.”

Players also have to travel to the Hull Street parking deck and Miller Learning Center during the game. In all, Johnson estimates the game takes one to two hours to complete, with some of the scenarios taking less time. Johnson was forced to spread out the locations because ARIS’ GPS function does not work inside buildings.

“Originally I wanted it to be in the Fine Arts Building and all the rooms in there,” she said. “But it’s actually better this way I think. It gets people to go outside.”

So far, Johnson has received only a little feedback from people who have played the game. Her classmates in locative media also have weighed in on her work.

“I’ve gotten some good feedback overall,” Johnson said. “I also have gotten a couple of emails from people who heard about it and said, ‘Oh, I heard about the Clue thing, how do I play it?’ ”

While she’s no longer in the class, Johnson plans to continue working on the Clue game and recently updated it so players wouldn’t be as dependent on objects like plaques and posters that might be taken down or moved.

“Maybe in the future I will expand it so there are six endings,” Johnson said. “I’d like to continue and keep up with it. And if people are playing, I’d like to hear from them.”

To play the Clue game, visit the Apple App Store and download the ARIS application. After being launched, the application will ask users to create an account and then search for nearby games.

If on campus, Johnson’s Clue game will come up as one of the options and users can select it to begin solving the mystery behind Dr. Black’s murder. To send feedback to Johnson, players can leave a review in ARIS or email her at caity.b.johnson@gmail.com.