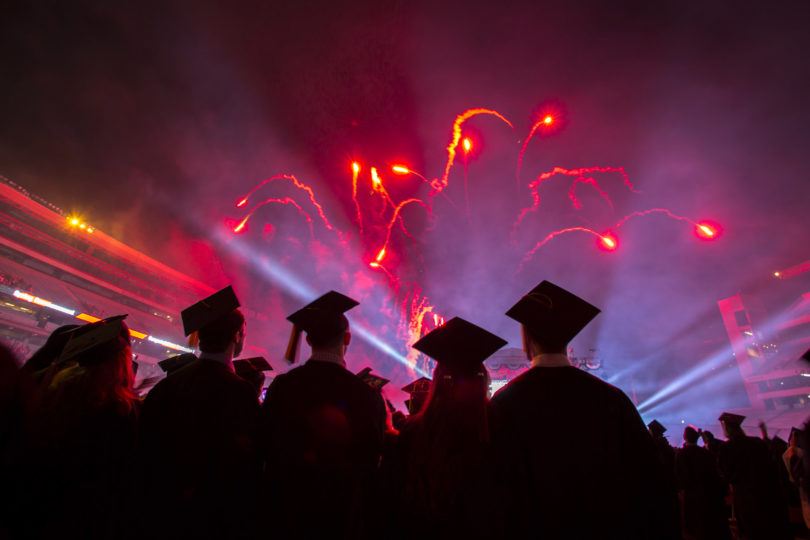 Athens, Ga. – A concerted effort at the University of Georgia to help students earn their degrees in a more timely manner has catapulted the institution’s four-year graduation rate to a record level.

Sixty-six percent of UGA students who enrolled as freshmen in the fall of 2012 graduated within four years, a 3 percentage point increase from the previous year.

“This outstanding achievement reflects the dedication of many individuals across campus-over many years-to putting students first at the University of Georgia,” said President Jere W. Morehead. “While we still have work to do, our progress in this area sends another strong signal of UGA’s upward trajectory.”

“Students at the University of Georgia are extraordinarily talented, and they are succeeding like never before,” said Senior Vice President for Academic Affairs and Provost Pamela Whitten. “To position them for even greater success in the future, we’ve launched several initiatives that help them make the most out of their UGA experience.”

The university has created 35 new academic advisor positions since 2014 to enable more personalized advising that is tailored to each student’s unique goals and aspirations. This fall the university opened a center in the heart of campus that houses 13 advisors specially trained to support students with undeclared majors, as well as intended business and journalism majors. By helping students decide on the major that’s right for them early in their college career, advisors in the Exploratory Center help reduce time-to-degree and, by extension, the cost of a college education for students and their families.

The university recently completed a small class size initiative that has brought more than 50 new faculty members to campus and enabled the creation of 319 new course sections, the majority of which have fewer than 20 students. The new course sections were chosen based on enrollment trends and with an eye toward challenging courses where students would benefit from more personalized instruction.

To give students more opportunities to earn credit hours during the summer months, UGA has added more than 250 new online courses since 2013. The result has been a dramatic increase in summer online enrollment, from nearly 1,500 students in 2013 to more than 6,200 in 2016. Overall summer enrollment has increased by nearly 10 percent in the past year to reach nearly 15,800.

This fall UGA also became the nation’s largest public university to ensure that each of its students engages in experiential learning. Hands-on learning experiences such as undergraduate research and internships have been shown to positively impact retention and graduation rates by promoting student engagement with the course material as well as with faculty members.

“The university has made significant progress over the past several years, and I’m confident that the best is yet to come,” said Vice President for Instruction Rahul Shrivastav. “Our investments in personalized advising services, smaller class sizes and unrivaled hands-on learning opportunities are fostering unprecedented levels of student success.”